For Prop. 16, 'equity and inclusion' must replace 'quotas' misuse

Equity, inclusion and diversity experts and supporters would sigh—and shrug. Opponents of affirmative action have completely co-opted the term, they agree. This was enshrined in California in 1996, when Proposition 209 passed, using this language: "The state shall not discriminate against, or grant preferential treatment to, any individual or group, on the basis of race, sex, color, ethnicity or national origin in the operation of public employment, public education, or public contracting."

Note the "grant preferential treatment to." As in, "establish quotas," in anti-affirmative action terms. Thus, when Prop. 16, which would have repealed Prop. 209, was placed on the Nov. 2020 ballot, its text stated only: "allows diversity as a factor in public employment, education and contracting decisions." Yet although supported by hundreds of government officials, multiple unions, the University of California Board of Regents and corporations ranging from the Warriors to Reddit, it still failed, 42.8 percent to 57.2 percent.

"Despite racial quotas being outlawed by the Supreme Court in Regents of UC vs. Bakke in 1978, misinformation about affirmative action policies leading to racial quotas is still prevalent," said Meher Dhaliwal, civil rights program manager at the Oakland-based Equal Justice Society (EJS), which helped coordinate the "Yes on 16" campaign. "Our campaign strived to clear up misinformation and confusion about affirmative action, making clear that it would not lead to racial quotas."

Dhaliwal pointed to opponents of the measure running on "confusion and fear-mongering." Others, however, have noted the probable impact of a pro-Prop. 16 ad that compared opponents of affirmative action (and by default, Prop. 16) to white supremacists marching in Charlottesville, Virginia in 2017, even showing footage of the torch-bearing marchers.

Whatever the reasons, the fight to "level the playing field" goes on. Multiple studies, now spanning decades, support the contention that diversity, far from lowering standards and productivity, increases them. For example, in the early 2000s, University of Michigan economics professor Scott Page, Ph.D., designed a study to prove his thesis that "the best and the brightest" in his complex systems analysis class would out-perform a team of "able and more diverse" problem solvers in a computer simulation. The opposite result caused him to re-test with a completely rewritten program, which produced the same results. This led him to conclude, as documented in several papers and his book, The Diversity Bonus, that a more diverse group uses different modes of thinking and tools, producing more innovative, accurate and effective solutions.

None of this comes as any surprise to Dr. Eleanor Mason Ramsey, president and CEO of Oakland's Mason Tillman Associates, which for years has maintained a client list of cities and government entities needing to examine their contract, hiring and advancement practices, as well as their corporate cultures, for parity, inclusion and equity. The company has worked with more than 140 public and private clients nationwide, including Oakland, and is now conducting research for the City of Berkeley. 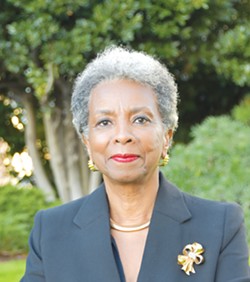 Her study will examine the city's vendor and sub-vendor contracts from 2016–2019, determining who has been eligible to compete for city contracts, who was awarded them and whether some groups were underutilized "by chance" or potentially through implicit bias. "Governments are a, if not the, major economic driver," Ramsey said.

Asked about Prop. 16, Ramsey suggested that some voters didn't understand clearly what the measure would do, and others, who felt they did understand it, "didn't recognize what their stake in it is." She agreed that "affirmative action" as a phrase is now being replaced by "equity and inclusion," which resonates with many more people. "There are real issues of poor education, poor housing, poor healthcare ... let's remake society by removing barriers to inclusion," she said.

Don T. O'Bannon, Mason Tillman outside counsel, added, "The law only wants to deal with very narrow issues ... but when we are unable to address societal discrimination, we cannot address structural inequality."

Although not prepared to comment on a next step, EJS's Dhaliwal summed up, "The vote on Prop. 16 demonstrates there is much more work to be done to promote equality and combat racism and sexism in California. By maintaining the ban on affirmative action, our state will continue to deny policymakers powerful tools to level the playing field for people of color and women in business, education and public employment."