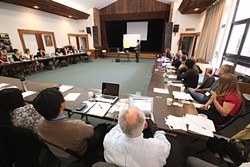 From the labeling of sugary drinks and genetically engineered foods to a proposed increase to the statewide minimum wage, California’s legislature has tackled no shortage of hot-button issues related to food policy in the past year. According to a new report, a total of 22 bills appeared before the state legislature that advocates believed would have a sweeping impact on making California’s food system more sustainable and equitable.

But when the dust settled, only nine of the 22 pieces of legislation were signed into law, with several potentially important bills never making it far enough into the legislative process to even be voted upon. It was a kind of mixed result that prompted Michael Dimock — president of Roots of Change, the Oakland-based non-profit that authored the report — to give California’s legislators a lackluster, “needs improvement” grade overall.

“If we [in California] want to remain the leader in agriculture and in food systems, we’ve got to get on the wagon here and do some interesting things,” Dimock said.

The 2014 Report on Legislation Related to Food and Farming was released this week by Roots of Change — a self-described “think-and-do tank” for the food movement — and the California Food Policy Council, a coalition of 19 local food policy councils and agricultural alliances from throughout the state, including ones in Oakland, Berkeley, and Richmond.

The report offers a brief analysis of the 22 pieces of legislation that the food policy councils, collectively, agreed would have a positive impact on the food system, and then catalogues the voting records of each state senator and assembly member on the fifteen bills that made it to an actual vote. Bills that passed both houses of the legislature and were approved by Governor Brown included a law designed to protect farm workers from sexual harassment and another that established a Farm to Fork office focused on providing healthy food to low-income Californians.

As the report notes, “The variety of legislation, whether successful or not, is representative of a food movement beginning to articulate its priorities in the Legislature.”

Still, landmark legislation that would have required GMO labeling and warning labels for sweetened beverages — to name two notable examples — both failed at various points in the legislative process. According to Oakland Food Policy Council director Esperanza Pallana, those failures are indicative that, when it comes to issues of food equity and sustainability, the California legislature is still largely controlled by corporate interests.

For instance, Dimock highlighted SB 1000, the sugary beverage bill, as a specific example where the millions of dollars that PepsiCo and the rest of the beverage industry spent on lobbyists ultimately killed the bill.

“We have the many, but not the money,” Pallana said. “It’s going to take a very determined and assertive approach in our legislature to make changes.”