Flipper’s 40 Years of Rhythm and Noise

The beloved "band you love to hate" reassembles for an anniversary tour. 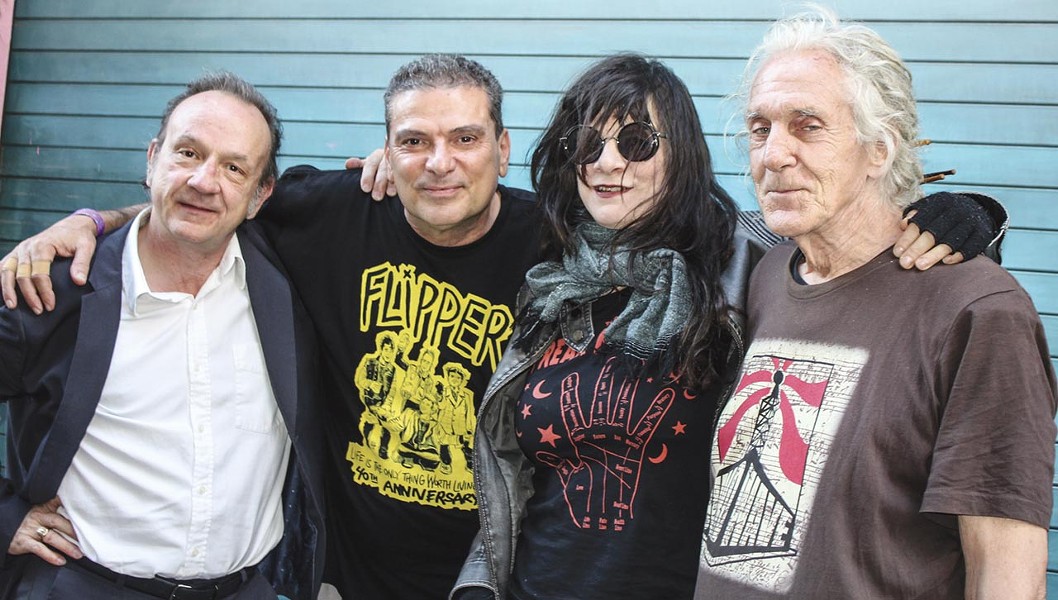 When Flipper appeared on the stage of the Mabuhay Gardens 40 years ago, it made a big impression. The club was the unofficial home of San Francisco's punk rock movement, with a roster of bands intent on destroying the conventions of popular music. Yet even amid that rebellious atmosphere, the music of Flipper stood out.

The original quartet — singer and bass player Will Shatter, guitarist Ted Falconi, singer and bass player Bruce Loose, and drummer Steve DePace — played music that was soon notorious. Their slow, glacial groove, Falconi's wall of noise guitar style, the interlocking bass lines of Loose and Shatter, and the relentless timekeeping of DePace's drums created a new, unfathomable style. With decades of hindsight, they can be recognized as the first post-rock band, or the forefathers of the grunge rock movement. At the time, their rhythmic, avant garde noise got them tagged as the band you love to hate.

"The band you love to hate, the hated Flipper, and other negative remarks about our music came out in the press," said Steve DePace, from his home in LA. "We never heard those things from our fans. That came about when the hardcore punks started being so fast and furious and we kept doing our slow, dirgey, noisy music. What we did do was match the hardcore bands with the energy of our shows. We generated chaos. The hardcore kids would scream at us and tell us to get off the stage, but they enjoyed being there. They stayed to the end of the set and came to the next show too. We became provocateurs. Bruce liked to aggravate the crowd and spur them on by antagonizing them. We'd drive the crowd crazy by playing one song for 40 minutes. We always loved the audience participation aspect of the show. People came on stage and danced along, and sang along. The band, the audience and the songs were all synched up."

DePace said Flipper's sound arose organically, a result of the interaction between the band's musicians. "When the four of us got together and played, that's what came out. Ted's unique guitar style — he played like a jet engine taking off — complimented the bass playing of Will and Bruce and my drumming. There was no plan to be slow or fast, it was just the way we wrote our songs. Will or Bruce would come up with a bass line, just plucking away until they found some melodic notes that sounded good together. We were not very proficient on our instruments. We were learning as we went along. Our sound just happened."

The band's inventive flights were not as free-form as they appeared to be. They were the result of careful planning and hours of preparation. "Our improvising wasn't disorganized," DePace said. "We were serious about rehearsing three nights a week — Monday, Wednesday and Friday. Then we'd go see bands at the Mabuhay to socialize and hang out and build the community."

During the band's first incarnation, from 1979 to 1987, Flipper became as infamous as they were famous. After Shatter died of an accidental overdose in 1987, the group disbanded, but after Falconi met bass player John Dougherty in 1990, Flipper reformed. Rick Ruben signed the new incarnation to his Def American label and produced American Grayfishy. The new band toured the US and Europe until Bruce Loose suffered a serious back injury in 1994. Flipper fell apart again.

"In 1995, I moved to LA to work in animation," DePace said. "I did music consulting on several Scooby Doo movies, then moved on to do band management. In 2005, CBGB asked us to perform two benefit shows to save the club from eviction." After those shows, the band continued. Loose returned after successful back surgery and Krist Novoselic of Nirvana joined on bass, until 2008. Rachael Thoele, of San Francisco's Frightwig, replaced Novoselic for tours of Australia, New Zealand and Europe, but after its 2012 tour, Loose suffered another setback and retired from Flipper.

"We got together again in 2015, with David Yow on vocals, for some shows in the US and Italy. I saw David do a guest spot on vocals at a Chrome show in LA and asked him if he might be interested in joining up with Flipper. He was busy with his acting career, so he didn't continue beyond the 13 shows we did that year.

"Flipper has been with me my whole life. Since I got the idea of a 40th anniversary tour in January, I haven't been doing much else. I called up Ted. Once he was on board, I hired a booking agent to set up shows in Europe and the US. Then I put a band together with Rachael Thoele and David Yow. With the Internet, our name recognition around the world is bigger than it's ever been, and the tour is looking good. I'm working on reissuing our back catalogue, so we can get out and play our songs and celebrate.

"I contacted people we've worked with over the years. They were all enthusiastic. Mike Watt (The Minutemen, firehose, The Stooges) is going to play bass on our European dates. Krist Novoselic said he'd play with us again, when his schedule permits. In Chicago, Martin Atkins, the first drummer for Public Image, Ltd, is joining us. Flipper was the opening act for PIL's first San Francisco show in 1980. We've stayed in touch. We'll have two drummers on stage in Chicago. He's one of my favorite musicians, so this is a big deal."

The anniversary also will be commemorated with a new recording. "We got together with (guitarist) Buzz (Osborne) and (drummer) Dale (Crover) from The Melvins. We're old pals. They've talked about Flipper being an influence on them. Ted and me did a session with them. We have a limited edition, 10" vinyl record and CD coming out on the Amphetamine Reptile label. It's called Hot Fish.

"So far, everything's coming together. It looks like this tour is going to be fun. We're going to take this incarnation of the band as far as we can. We're going to drive it 'till the wheels fall off."