A team of East Bay Express reporters will recap, analyze and riff on Donald Trump's big luncheon at today's California GOP convention in next week's issue. Be sure to pick it up. Until then, three lessons learned:

Flag burning at a Trump rally is controversial: I'm told lighting up the American flag is not uncommon at Bay Area and Oakland actions (I'm the new guy here). But this flag-burning video incited all sorts of anger (and Racist Twitter):


The burning occurred after Trump's speech concluded, around 2 p.m., on the lawn out front of the Hyatt Regency in Burlingame.

My take on incendiary U.S. flags as a form of civil disobedience isn't important. What is is how traditional media uses video and images of such actions, and how the broader population reacts. Hint: They lose it.

Using mountaineering skills at a protest, most impressive: Three men clandestinely made it to the sixth floor of the Hyatt Regency, used climbing ropes to edge out over the hotel atrium, and hung two banners with the words "Stop Hate," displayed to the cheers of protesters out front the hotel. Two convention attendees snatched one banner before the activists could hang it, and Hyatt employees grumbled as they fished the other banner down. Again, impressive. 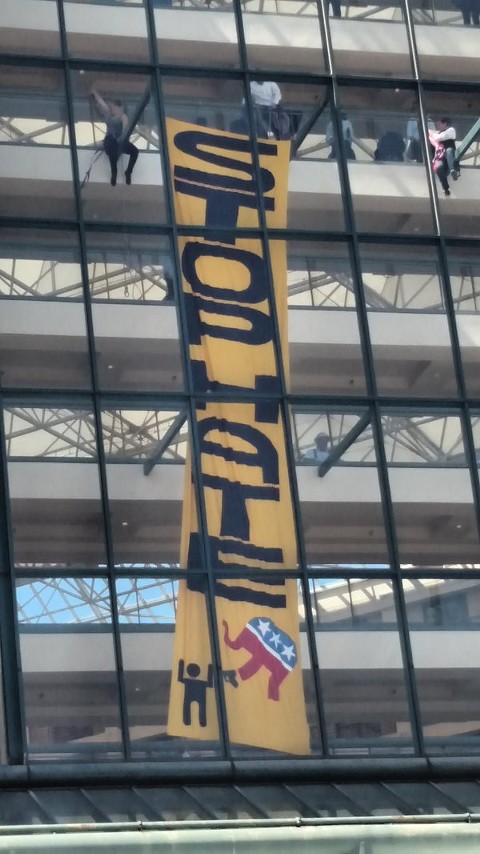 Trump was rattled: As numerous media outlets reported, Trump's caravan was unable to exit from the freeway in Burlingame. So, his vehicle just pulled to the shoulder, Trump emerged, hopped a cement barrier, shimmied under a fence, and snuck in to the Hyatt via a rear entrance. This delayed Trump's speech by more than 45 minutes. When he finally arrived, he compared his adventure to "crossing the border."

Sorry, Donald: More than 100 bodies are found each year along migration routes, according to the Los Angeles Times. What you experienced was what normally people have to do when they get a flat on Highway 101.

Anyway, his speech, a mishmash of greatest hits (the wall, Lyin' Ted, Crooked Hillary), was rushed, if a bit frazzled. Not frantic, but perhaps hastened by the protesters. Also, it's not much a speech, but instead more a braggadocio. His talk was devoid of issues. It's all about winning here, and polling there—the political equivalent of the final outro song on a hip-hop record.

Again, look for more Donald Drumpf in next week's issue. Some photos to tide you over:

Nary a Trump poster inside the Hyatt. Seriously.

Hillary cornhole, coming to a craft brewery near you?

Protesters block Trump from exiting the Hyatt after his speech.