Fear and Loathing in (the New) Oakland

Hunter Thompson criticized many things in The Town — but what would the famed gonzo journalist say about a gentrified, Raider-less East Bay? 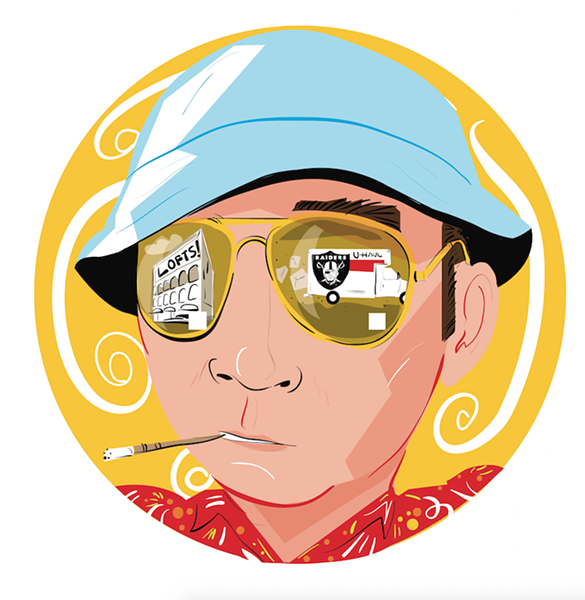 And, while living in San Francisco, he crudely opined that “Oakland is a magnet for people who want hour-wage jobs and cheap housing, who can’t afford to live in Berkeley, San Francisco, or any of the middle-class Bay Area suburbs.”

But more than fifty years since that description, Oakland is an increasingly expensive city that is losing its working and middle-class residents. The Oakland Raiders are leaving town. And the Hell’s Angels, who were a scrappy young motorcycle club when Thompson was around, turned sixty this year.
Oakland is no longer the town that Thompson loved to loathe.

But one of his biographers says Thompson’s characterization of Oakland wasn’t necessarily condemnation. “Maybe to him, that was what we get when we buy into the American bargain,” William McKeen, author of Outlaw Journalist: the Life and Times of Hunter S. Thompson, recently told the Express. “He favored that which is authentic over that which is synthetic.”

Thompson saw Oakland’s authenticity in its outlaw culture. Its wilder heydays of the late ’60s and ’70s was a ripe place for his lurid and imaginative form of Gonzo journalism, especially with the formation of the Oakland Raiders die-hard fan base.

“You could see the early beginnings of what would evolve into the massive Raider Nation, which is beyond doubt, the sleaziest and rudest and most sinister mob of thugs and wackos ever assembled,” Thompson wrote in 2003.
With modern-day parallels of Thompson’s more infamous pieces of reportage still lingering in the East Bay air — such as clashes between police and protestors during Occupy protests akin to the 1968 Democratic convention in Chicago — those who know Thompson’s words well speculate many of the changes in Oakland would have put the good doctor on edge.

“So, there are still Hell’s Angels, but they’re on bicycles, and still Black Panther equivalents, and there are still wars that we are ‘prosecuting,’ but we send only the poor, because a draft builds an anti-war movement,” Evans explained.
But the real Hell’s Angels haven’t left town. The club’s Oakland chapter — for which Thompson wrote the book that catapulted his writing career — celebrated their 60th anniversary in Paris at the end of May with its founder Sonny Barger.

I knocked on the clubhouse’s door on Foothill Boulevard, but no one answered. A representative of the club later told me over the phone that club members no longer give interviews, a marked change from when Thompson spent a year with them.

Then again, Thompson took a beating at the hands of some Angels before his story was done, so maybe that’s for the best.

Then there’s the Raiders. Thompson was a diehard fan, but the owner at the time, Al Davis, was, in Thompson’s judgment, “the owner of the flakiest team in pro football.” Even while Barger was arrested for selling heroin, Thompson kept him in higher regard than the former Raiders owner.

“Any society that will put Barger in jail and make Al Davis a respectable millionaire at the same time is not a society to be trifled with,” Thompson wrote in 1974.

Now Davis’ son, Mark, is the driving force behind the team’s move to Las Vegas. Even though Thompson altered pop culture with his drug-fueled road trip to Sin City to cover a sporting event with Fear and Loathing in Las Vegas under his moniker Raoul Duke, McKeen says moving the most anarchistic team in the NFL would be an appropriate choice for a town built on vice.
“However, the Raiders are Oakland. Any fan base in Vegas is bound to be a transitory group mostly comprised of touristas,” McKeen said.

The persona behind the Twitter handle @GonzoVice — calling himself Raoul Duke Jr. — says, as an incurable gambling addict, Thompson would have seen potential in the Raiders move to Vegas, “the heart of the American Dream.”
“The Raiders of Hunter’s time were brutes in the worst way, and turning Vegas into their playground would appear to be an almost perfect fit,” Duke Jr. said.
But that was then. This is now, a world — and Oakland — without Thompson.
Evans argues that a modern-day Gonzo reporter would find difficulty in discovering an audience, as court jesters, prophets, muckrakers, and comedians like Thompson are often shunned, something he would have found both funny and sad.

“We only laugh at others, not ourselves,” Evans said. “It’s hard to be the fool, when you see what you see and are trapped in that, too.”

Thompson would have turned eighty last week, but he killed himself in 2005. “Hunter never wanted to live to see our current state of affairs in this country,” Duke Jr. said. “He all but predicted this type of scenario happening in modern America.”

McKeen says if Thompson was alive today, he’d kill himself all over again. “I don’t think he could live in a world where that thing he respected so much — the American Dream of freedom — was repeatedly shat upon, and shat upon with glee,” he said.