After the deadly warehouse fire, Oakland city officials vowed to help improve the safety of unpermitted live-work spaces without displacing residents. But many tenants have been evicted. 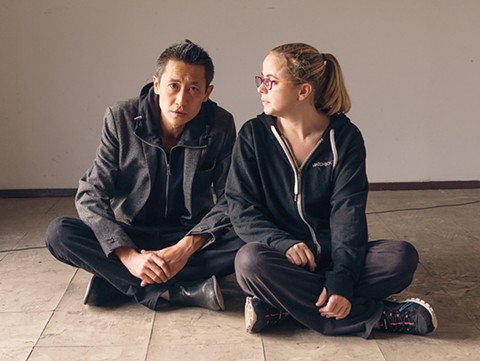 The memorial for Joey Casio, one of the 36 people who died in the Ghost Ship fire last December, took place just days later in the former church he called home for most of his time in Oakland. Dozens of people, including Casio's parents, sat on the floor and shared memories of the late musician. A makeshift shrine was erected in one corner of the building's common area.

But his friends had to be careful about publicizing the event. "We had to tell people not to post the address anywhere," said Sinuba Dreem, a resident. "If you knew Joey, you know where this is."

Indeed, in the days after the deadly fire, which occurred at an underground electronic music event held at a warehouse in Oakland's Fruitvale district, many feared that the city would begin to crack down on similar unpermitted residences in Oakland. Tooth, one of Dreem's housemates, said that the morning after the fire, he was at the Alameda County Sheriff's Office when Oakland Mayor Libby Schaaf, in a tense exchange with grief-stricken family members, spoke about safety and preventing another tragedy. "In my head, I imagined this nightmare scenario, all of these spaces targeted," he recalled. "Everything in that scenario has come to pass."

Sure enough, not long after Casio's memorial, the city began investigating the former church. The two-story building located in West Oakland's McClymonds neighborhood has provided affordable housing to a rotating cast of artists and musicians over the years: Tooth is an experimental filmmaker, Dreem is a noise musician, and Casio produced industrial-techno under the moniker Obsidian Blade.

In the meantime, Dreem joined Safer DIY Spaces, an advocacy group composed of architects, builders, and activists that emerged from post-fire town-hall meetings in an effort to help tenants and building owners safely update their living spaces while avoiding displacing residents. The landlord of the former church (who did not respond to multiple requests for comment) had given David Keenan, one of the members of Safer DIY Spaces, authorization to work with city officials on her behalf.

The group assessed the West Oakland space ahead of its inspection, which led to decluttering and the installation of more exit signs. Safer DIY Spaces, which relies on donations and volunteer labor, even paid to store some of Tooth's film collection. Casio's shrine, by then a vibrant menagerie, was scaled back. And a small loft had to be dismantled, meaning Dreem had to move out. "That room we tore down, that was Joey's first room in Oakland," Tooth said.

When a building inspector from the city finally did a walkthrough in May, he issued a notice of violation, citing a lack of permits for practically every interior alteration. Seven months later, the tenants continue to be in limbo. They fear that, without officials' flexibility and their landlord's continued patience, they'll lose their home. "Honestly, I'm less and less optimistic," Dreem said.

Their situation is hardly unique. After the fire at Ghost Ship, the city came under intense pressure to identify other potentially hazardous warehouse residences. At the same time, the city is in the midst of an acute housing crisis, and warehouses provided much-needed affordable housing. Acknowledging this fact, the mayor issued an executive order in January to help owners of unpermitted units upgrade their properties while explicitly directing city staff to avoid displacing residents, except in instances of life-threatening conditions.

But public records reveal that the mayor's plan hasn't been achieving its goals. Of the 64 investigations of nonresidential properties conducted by the city in the eight months following the fire, 10 resulted in evictions that displaced more than 45 people, and interviews with landlords, tenants, and attorneys indicate that more are likely to come. There are also allegations that some of the evictions have been illegal. Former tenants of two properties have filed unlawful eviction lawsuits against their landlords, who've both since sold the properties at steep profits.

Additionally, the Express didn't find any evidence that the city's approach to unpermitted residences changed after the mayor's order. According to city records, inspectors have regularly instructed property owners to "discontinue residential use" — even at properties that, according to building experts who toured them, appeared to pose no life-safety risks. Some landlords followed inspectors' de-facto orders to evict their tenants, while others have resisted.

"We found that inspectors ignored the mayor's order with respect to avoiding displacement and focusing on safety issues," said Thomas Dolan, an architect and member of Safer DIY Spaces. Dolan, who also authored Oakland's live-work code, said he's personally visited more than 30 at-risk residences since the fire and successfully intervened in instances when inspectors ordered landlords to evict tenants from spaces he considers safe. "We'd just like the inspectors to be more like instructors and less like cops."

But even in cases such as the former church in West Oakland where the owner, tenants, and advocates are working together, legitimizing the residence may be prohibitively expensive, at least without dramatically increasing rent to compensate. To start, changing a building's designated use from commercial to residential generally triggers the need for upgrades such as sprinklers and seismic retrofitting, which easily cost upwards of tens of thousands of dollars.

To lower these hurdles, the mayor's executive order established a fire-safety task force to come up with changes to the city's building and planning codes in order to make it easier and less costly for unpermitted buildings to become legal dwellings. However, several members of the task force said their recommendations, which they drafted months ago, are being held up by building department officials, and it's unclear when they'll be released for public consideration, let alone implemented.