Come to Shewhat Cafe & Restaurant for the breakfast (or lunch or dinner), stay for the traditional coffee ceremony.

When I stepped into Shewhat Cafe & Restaurant, the hazy air was filled with the smoke and aroma of freshly roasted coffee beans. Eritrean music videos played on the TV, while groups clustered around tables adorned with silk flowers, chatting and drinking tea. A man stopped in to buy bags of injera to go. And every time a customer arrived, the owner, Abby Dair, emerged from the kitchen to greet them with a smile.

Shewhat, an Eritrean and Ethiopian restaurant in North Oakland serving breakfast, lunch, and dinner, recently opened in August. But Dair is no newcomer to the food scene. She's worked at Berkeley Bowl for over a decade — her first job in the United States since emigrating from Eritrea — and when she's not at Shewhat, she still works at Berkeley Bowl. Dair has also worked as a waitress. But when coworkers tasted her cooking, they suggested she open her own restaurant. "I love to cook," Dair said.

Growing up, Dair learned to make Eritrean food from her mother, Shewhat, after whom the restaurant is named. (According to Dair, the name Shewhat also means appetite — the perfect name for a restaurant.) Her mother has passed away, but Dair and her sister, Selam, cook using their mother's recipes at the restaurant. "She [was] very motivated, the way she cook[ed]," Dair said. That same motivation drives Dair's cooking, both at Shewhat and at home. "Even at home, I never cook one dish — I cook four or five dishes."

Dair's homestyle approach to cooking is key to Shewhat's success. Since opening a few months ago, Dair has already gained a following of regular customers. "I was surprised," she said, "but I'm very lucky. People, once they came, they start coming back and coming back. They say... when we eat [here], we feel like we are at home."

And what better way to feel at home than with a comforting Eritrean-style breakfast? For first-timers or solo diners, I recommend the Shewhat plate: a combination of shahan ful with feritata on the side, served with green salad and a crusty roll. The shahan ful is a silky, flavorful puree of fava beans, topped with sprinklings of berbere, diced white onion, tomato, jalapeño pepper, tahini, olive oil, and a crumbly, feta-like cheese. Tear off a piece of the roll, which has a satisfying shattering crust and fluffy, airy middle, and use it to scoop up the shahan ful. The feritata, scrambled eggs with diced jalapeño and tomato, was perfectly cooked into custardy curds.

Then there's the fitfit — torn pieces of injera served in spicy red, berbere-tinged butter. The sauce transformed the flavor and texture of the injera — it became more sweet than sour, and the pieces of injera melted in my mouth. Dipped into the accompanying yogurt on the side, this was a comforting breakfast that I'd happily eat any day.

One dish I'd never seen before on Eritrean and Ethiopian breakfast menus is the ge'at, or barley porridge. Dair said it's a traditional and beloved dish that's often served to special house guests for breakfast. "It's not easy to make," she added. It involves constant stirring throughout the cooking process. The result is a dense yet smooth porridge that's so thick you can cut it with a spoon or ball it up in your fingers. It's served in a well shape, with berbere-flavored melted butter in the middle and a ring of plain yogurt on the outside. On its own, the porridge had a savory, nutty flavor and a distinctive chew. When eaten with the yogurt and oil, it was tangy, creamy, and had a hint of spice that made it difficult to stop eating.

And if you come around lunchtime, you can simultaneously sample Shewhat's lunch and dinner menu. I tried the Shewhat combo — a plate of lamb tibsy and chicken and spinach tibsy served with salad on top of injera. The lamb tibsy was excellent — chunks of tender lamb cooked with slivers of sweet, caramelized white onion in a spicy, garlicky, buttery, berbere-scented sauce. But even better was the chicken and spinach tibsy. The chicken was flavorful and succulent, and the spinach added a hint of bitterness.

As with many Eritrean and Ethiopian restaurants, there are plenty of vegetarian and vegan options to choose from, even at lunch and dinner. I tried the vegetarian combo, which was served with dollops of red lentils, yellow lentils, cabbage and potato, spinach, and salad atop a piece of injera. The potato was a little undercooked, but the cabbage, spinach, and lentils were all satisfying and well-seasoned, without any excessive grease. For those who aren't fans of injera, there's also the Bilen plate, described on the menu as a vegetable stew served over rice. What I received wasn't much of a stew — it was more of a stir-fry of vegetables including cabbage, whole snap peas, carrots, green beans, and broccoli. All the vegetables were fresh, crunchy, and flavorful, and bits of the turmeric rice had a crispy, craveable crust.

But let's go back to that freshly roasted coffee. On one visit, Dair brought out a pan of crackling, sizzling coffee beans, carrying the pan from table to table for customers to admire. She brought the pan back into the kitchen and then served a tray of popcorn to a neighboring table. At first I was puzzled — popcorn isn't on Shewhat's menu. As it turns out, popcorn is a typical snack served during Eritrean and Ethiopian coffee ceremonies. 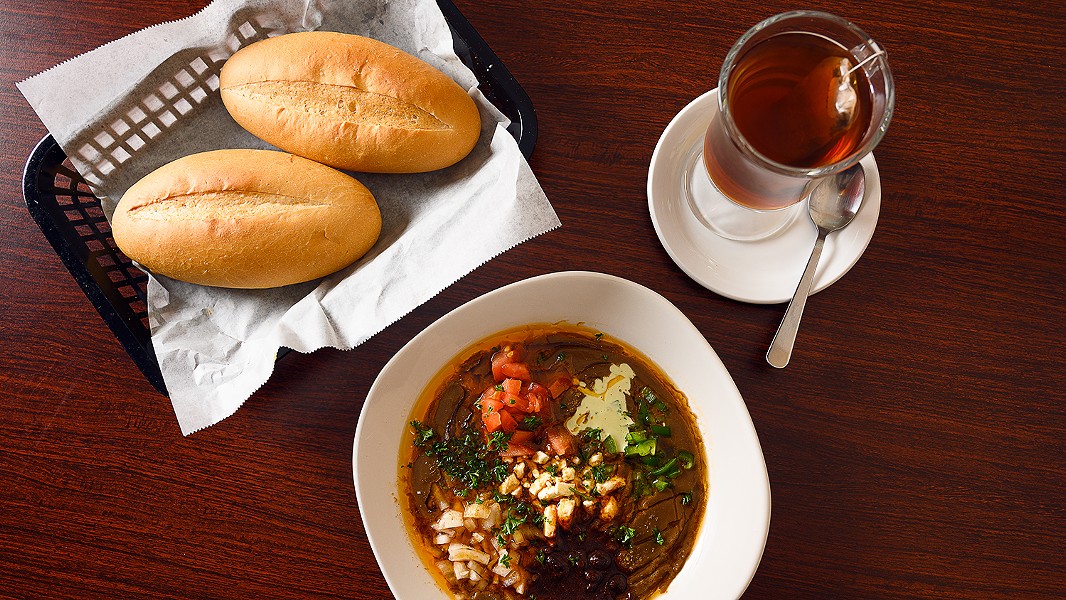 So I ordered the traditional coffee, too, although it wasn't listed on the menu either. I snacked on popcorn while the coffee brewed. After a few minutes, a clay pot, or jebena, of traditionally brewed coffee, known as bunn, arrived at the table. Poured from a height nearly a foot above the table, it splashed dramatically into the cups.

It was one of the best cups of coffee I've ever had. It was a dark roast spiced with a bit of ginger, yet it lacked any unpleasant bitterness, and was perfectly smooth. Every sip yielded another level of flavor. By the time I was done with my teacup-sized coffee, I already wanted more.

But that just means I'll have to make a return trip to Shewhat. I can't think of many better ways to spend a weekend afternoon. Make yourself at home, eat some popcorn, and take another sip of coffee. 