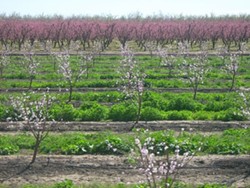 Local environmental groups have long fought the California Department of Pesticide Regulation (DPR) over the widespread agricultural uses of chlorpyrifos, a toxic insecticide that, according to a growing body of research, poses serious health risks to children. Although California officials, as I reported in May, have continued to defend this pesticide and the state's policies regulating its use, the US Environmental Protection Agency (EPA) announced this week that it is considering a potential federal ban on chlorpyrifos — raising questions about the chemical's ongoing applications in California.

In the face of these studies, a coalition of environmental groups have taken a number of actions to pressure California and the EPA to ban the agricultural uses of chlorpyrifos, which the federal government originally banned for residential use in 2000, due to health concerns. Yesterday, as part of an ongoing legal dispute regarding the chemical's agricultural uses, the EPA, citing concerns about drinking water, announced in a US Court of Appeals filing, that by April 15, 2016, the EPA plans to "revoke all chlorpyrifos [uses] to address drinking water exposure concerns in small sensitive watersheds throughout the country.” In other words, the EPA declared its intention to effectively ban all agricultural uses of chlorpyrifos within a year — but with a major caveat.

The EPA's report to the court — which is a formal response to environmental groups' 2007 petition requesting that federal regulators ban chlorpyrifos — stated that the EPA would reconsider its proposed ban if the pesticide manufacturers made certain safety-related changes. Specifically, if the manufacturer — Dow AgroSciences, Indiana-based chemical corporation — took "necessary action, i.e., amending the product labeling of chlorpyrifos products, to address unsafe drinking water exposures," the EPA would then immediately reconsider if the proposed ban is still warranted. That means it's possible that Dow in the coming months could make certain changes designed at limiting health hazards in drinking water — and that the EPA could subsequently allow for its continued use.

You can read the EPA's full report here. The EPA also noted that there are outstanding concerns about risks to farmworkers and other agricultural employees exposed to chlorpyrifos.

Local environmental groups praised the announcement today as long overdue and urged the EPA to follow through with the proposed ban. "It's in part a recognition of the harms of chlorpyrifos," said Paul Towers, organizing and media director for Pesticide Action Network, an Oakland-based group that has challenged the use of the pesticide in California and at the federal level. "It's a good sign, but states and the federal government shouldn't delay any longer."

The EPA's announcement comes after the California DPR recently released a report showing that from 2012 to 2013 (the most recent year for which data is available), the use of chlorpyrifos in the state has actually increased. Farmers applied 1.5 million pounds of the pesticide in 2013 — which was a 32 percent jump from the 1.1 million pounds reported in 2012. The chemical is used on a wide range of crops, including almonds, walnuts, oranges, and grapes, and it is most prevalent in the San Joaquin Valley and along the Central Coast (though asparagus and walnut growers in Contra Costa County also use chlorpyrifos).

Unrelated to the EPA case, California today also published new rules governing the use of chlorpyrifos in the state — policies that activists say are inadequate and don't do enough to protect vulnerable communities. The state has officially designated chlorpyrifos a "restricted material," which means county agricultural commissioners are now required to review and issue permits for each proposed application of the chemical. While this new system could help reduce dangerous uses, advocates have long argued that the best way to protect children is to institute or full-fledged ban or at least adopt strict policies automatically prohibiting the use of this pesticide in sensitive areas — such as creating "no-spray buffer zones" around schools. Even if the EPA ultimately settles the longstanding dispute over chlorpyrifos through a federal ban, California advocates argued that the need for major restrictions here is urgent and that the state should take immediate actions to protect people living in agricultural communities where chlorpyrifos use is prevalent.

For more on the research and dispute in California, see our recent news story, "Hazardous Pesticide Use Increases in California."