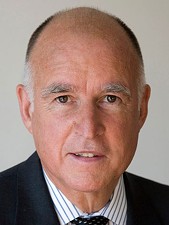 One is a legal petition by more than 150 environmental, health, labor, and community organizations asking Governor Jerry Brown to use his emergency powers to halt fracking. State law requires the governor to respond to this type of petition within thirty days.


A series of reports over the last eight months revealed that companies using an oil-extraction method known as hydraulic fracturing (fracking) have been illegally injecting toxic wastewater from the procedure into California aquifers. Meanwhile an environmental review by California’s Environmental Protection Agency found that fracking causes “significant and unavoidable” increases in air pollution, greenhouse gas emissions, and the risk of fuel spills and explosions during both mining and transportation of the fuel.

Starting last summer, the state and federal Environmental Protection Agencies and the Central Valley Regional Water Board revealed that hundreds of California fracking operations have been injecting wastewater laced with toxins, including high concentrations of the carcinogen benzene, into wells connected to California’s underground water supply. A March 4 report by the California EPA said toxic wastewater is currently being injected into the state’s aquifers at 2,100 locations, of which 140 feed directly into aquifers of drinking-water quality.

The state Department of Oil, Gas, and Geothermal Resources (DOGGR), which permitted this practice for decades, has now begun a process of evaluating these wells and ordered eleven shut down last July, of which three have reopened. Last week, DOGGR closed another twelve. After that action Kassie Siegel of the Center for Biological Diversity, one of the groups petitioning for a fracking moratorium, said in a statement, “Shutting down twelve illegal injection wells barely scrapes the surface of this threat to our drinking water.”

“Oil companies are fracking near homes and schools, and it’s time for Governor Brown to end this terrible threat to public health,” said Juan Flores, an organizer with the Central Valley-based Center on Race, Poverty and the Environment. “People in the state have suffered from fracking pollution for far too long. The governor needs to protect our air, our water, and our communities by halting fracking.”

Meanwhile three organizations have each filed lawsuits against Contra Costa County, charging that its recent approval of expansion plans for the Rodeo-based Phillips 66 refinery failed to reveal the true environmental costs of the project and has given the greenlight to a plan that will increase safety hazards, air pollution, and greenhouse gas emissions.

The Rodeo Citizens’ Association (RCA), one of the groups suing the county, pointed to the safety hazards involved in the refinery’s planned increase in the storage and transport of propane and butane, volatile byproducts of petroleum refining. “Phillips 66 presented Contra Costa County with a plan that essentially says there would be no increase in environmental or safety risks associated with the expansion in operations, and the Board of Supervisors simply accepted the refinery’s analysis at face value,” said Ellison Folk, attorney with San Francisco-based Shute, Mihaly & Weinberger, LLP, who represents RCA in the case.

Despite Phillips 66’s repeated statements that the project will not involve any change in the quantity or quality of crude oil the refinery will process, the lawsuits filed by both RCA and the environmental organization Communities for a Better Environment (CBE) cite evidence that the project is connected to a plan to process dirty, highly polluting crude oil from the Canadian tar sands.

Throughout the county’s approval process, CBE has presented technical analyses supporting its contention that the refinery’s goals for the project cannot be met without refining oil of the type produced by the tar sands. CBE also quotes Phillips 66 CEO Greg Garland saying the company plans to increase its profits by using crude from Canadian tar sands. CBE says the county’s environmental review fails to refute the CBE technical analysis but simply repeats Phillips 66’s denials.

The CBE lawsuit also claims that the new project will mean sending tar sands crude oil on trains through East Bay communities and down the coast. CBE has consistently pointed out that the Rodeo project is just one part of a planned overhaul that also includes a complementary project in the Phillips 66 refinery in Santa Maria (San Luis Obispo County). When the project is complete, according to the CBE analysis, trains will bring tar sands oil from Canada along the California coast to the Santa Maria refinery. There the crude oil will be partially refined, then sent by pipeline to Rodeo for final processing. Tar sands oil is especially contaminated with toxins and has a very thick consistency, which means that spills, especially spills near bodies of water, are impossible to clean up.

In addition, both the RCA and CBE lawsuits claim that refining and burning tar sands oil, in addition to Phillips 66’s plans to sell propane generated as a byproduct of the refining process, will increase greenhouse gas emissions.

A third organization, the Safe Fuel Energy Resources of California, a group representing workers at the Rodeo refinery, has also filed a lawsuit against the county for approving the Phillips 66 project, according to a report in the West Contra Costa Times.