But some complained about the union's protest outside an Islamic place of worship.

The unions that represent most of the city's workforce are currently in contract talks, but negotiations have not been going well.

On Thursday, SEIU Local 1021 staged a half-day strike to protest what workers say are unacceptable proposals from Schaaf's administration. The unions say they're being offered pay and benefits packages that amount to cuts due to high rates of inflation and rapidly rising housing prices.

Outside the Islamic Cultural Center of Northern California on Thursday evening — the venue chosen by Schaaf for her speech to illustrate Oakland's pride in diversity — hundreds of workers formed a picket line and called on people not to attend the speech.

"Scabs!" they yelled at city department heads walking past them. They booed Schaaf's supporters who crossed the picket line while cheering others who decided not to enter because of the labor discord.

Oakland's new Fire Chief Darren White was heavily booed as he walked through the picket line into the venue.  Firefighters union President Dan Robertson tweeted that it was "disappointing" to see the department's leader not stand in solidarity with the rank and file. The firefighters' union is also locked in contract talks with the city.

Disappointing... Came up through the ranks? Then act accordingly. OAK FF’s are #UnionStrong. You should be too, Chief White

The only major city employee union without a presence at the protest was the Oakland Police Officers Association. Several police officers worked as security for the event, politely opening and closing the iron gate at the center's entrance 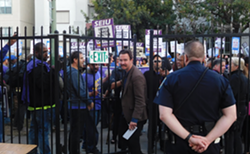 Councilmember Dan Kalb, North Oakland, also did not attend the mayor's speech out of solidarity with the workers.

"Throughout my life, I've had an ethic not to cross picket lines," Rebecca Kaplan told the Express.

"As the son of union workers, I understand first-hand the importance of expressing solidarity with workers," wrote Councilmember Abel Guillen in a Facebook post. "I won't be attending tonight's event and will not cross the picket line."

Oakland City Administrator Sabrina Landreth, who is in charge of the bargaining negotiations with the city's public-employee unions, has offered SEIU 1021 members a 4 percent raise over two years, plus a 2 percent one-time signing bonus, according to city spokesperson Karen Boyd. The city pegged the costs of the SEIU raise at $36 million.

However, it will be up to councilmembers to approve any deal reached between the city and the unions. And the councilmembers' decision to not cross the SEIU picket line last night, and for some of them to join the protest, could embolden the union to stick to its demand for a better deal than what the city is offering. The city budget that the council approved earlier this year, however, did not include substantial raises for the city employees.

The unions last night also were criticized for staging a boisterous protest outside the Islamic cultural center.

Several people told the Express that they were worried about the protest because some worshipers didn't understand why the union members were picketing the center and asking people not to enter. Because of this week's events in New York City involving a young man who told police he was inspired by the ISIS to kill eight people in a random attack, some worried the union protest might be misconstrued as a protest against Muslims.

Schaaf even sent an email out earlier in the day that upset union members because it stated that "Despite the protest outside, the doors to the Islamic Cultural Center will remain open, and all Oaklanders are invited tonight to show the world our city stands for unity and compassion." 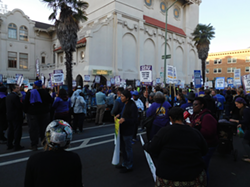 And Payman Amiri, the chairman of the Islamic center, told the Express he had concerns about the protest.

But Cherly Sudduth said that it was only a misunderstanding and that the union members actually went to extra lengths to facilitate a safe and un-harassed path into the center for Muslims who were there to worship or for some other purpose besides the mayor's speech.

"I told them I did need to get inside," said Sudduth, who is Muslim and also a candidate for the state Assembly District 15 seat. "They stepped forward and allowed me to walk in behind them."

Sudduth said she came for prayer but also attended the mayor's speech. "They were totally respectful," said Sudduth about the union protest.

Several councilmembers refuse to cross the union picket line for the Mayor Schaaf's state of the city address pic.twitter.com/lram1y3xNC

As to the substance of Schaaf's speech, the mayor addressed many of the city's challenges, from affordable housing and homelessness to public safety and racial disparities at the hands of the police.

She praised Oakland voters for passing Measure JJ last November, a package of renter protections that was heavily supported by SEIU Local 1021.

She also praised the creation of the new police commission.

And she called for more affordable and market-rate housing to address the region's housing shortage.

She also challenged Oakland's homeowners to create more housing for long-term residents. "Give up that Airbnb," she said. "Fix up that back unit."

As to the unions protesting her administration's offers at the bargaining table, she said: "Tonight we saw a great expression of Oakland values. When they speak truth to power, when they protest, I deeply respect that and want to give every city worker a round of applause."