Ending a Double-Standard at Laney College

California has invested millions in educating formerly incarcerated students at community colleges, but those students have struggled to get campus jobs. That could finally change. 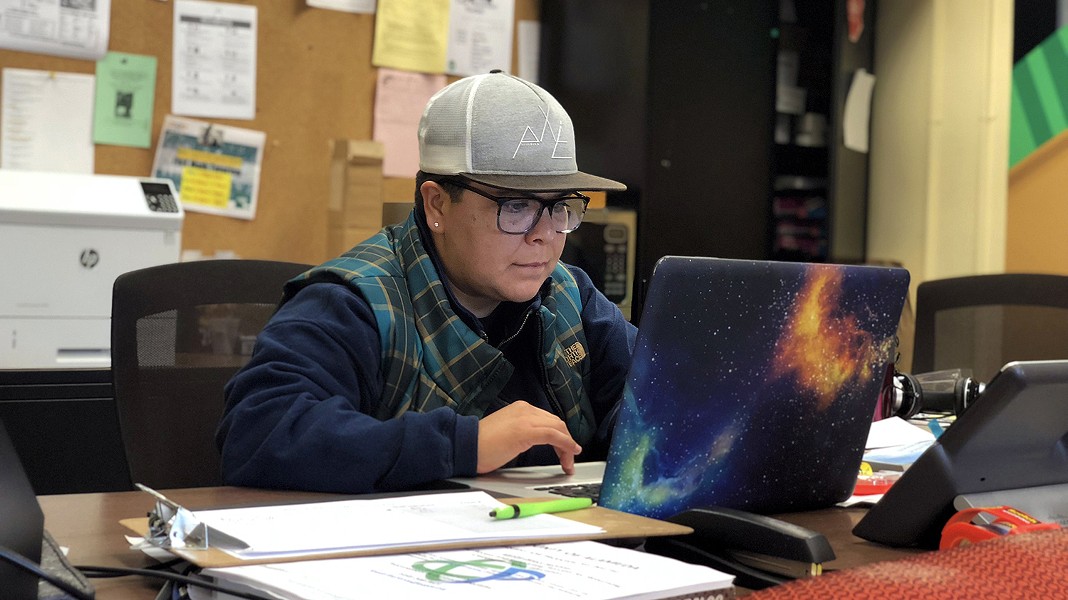 Alejandra Landin once dropped a course at Laney College to avoid telling her professor that she had to miss class for a meeting with her probation officer. That was 2012. Now, Landin is back on campus, working as the equity specialist at Restoring Our Communities, a program that supports formerly incarcerated students at the community college. Landin said sharing her incarceration story with students “is where the connection and trust begin.”

Since 2014, California has invested millions of dollars in programs like Restoring Our Communities to support formerly incarcerated students in community colleges. But the schools have been reticent about hiring formerly incarcerated people like Landin because of a confusing array of laws and education codes governing hiring. Landin herself has been working as a contractor in a position that did not require a background check. She loves her work but wants a classified position at Laney that comes with benefits and job security. And for the first time since leaving the Dublin Federal Correctional Institution and starting at Laney, that job could be in reach soon.

A legal advisory from the California Community Colleges Chancellor’s Office — released on Dec. 31 — could pave the way for community college districts to hire applicants with criminal records. “We believe this is reasonable and appropriate, will reduce the influence of discriminatory animus in hiring, and will help eliminate a significant barrier that prevents skilled individuals from entering the workforce,” wrote Marc LeForestier, general counsel for the chancellor’s office, in an email to the Express.

The new policy will impact the state’s entire community college system. And Landin is preparing to be one of the first job applicants to test it.
When Roger Chung, director of Restoring Our Communities, set out to hire Landin and her co-worker, Vincent Garrett, in permanent positions at Laney, he approached the hiring process as an experiment. Both Landin and Garrett had been working as contractors for two years. They were qualified for the jobs and beloved by students. But Chung was not sure if Landin and Garrett would make it past the district’s Human Resources Department.

“If they do a background check and something hits,” said Chung, “they are not sure what to do with it or they are risk averse to it.”

“It will allow us to clarify the policies of HR,” he said, “or if needed, to write them.”

That was months before the state chancellor’s office released its new policy guidelines.

Debbie Mukamal, executive director of the Stanford Criminal Justice Center and a legal advisor on the chancellor's new guidance, understood Chung’s position. She said that the relationship between state and federal laws, as well as education codes, had created confusion for HR departments that ultimately do the hiring.

“The ed code sets out explicit ‘do not, do not, do not,’” said Mukamal, referring to part of the education code that restricts the colleges’ ability to hire individuals with sex or drug offenses within the last five years. But other laws prevent employers from placing blanket restrictions based on prior convictions.

Mukamal’s work with the chancellor’s office produced a legal opinion that interprets the relationship between the various laws and codes. In the past, district-level HR departments had been left to interpret on their own, and according to Mukamal, they shied away from risk. “At the end of the day, the buck stops with them if something goes wrong,” Mukamal said. “By design and by profession, HR people are risk-averse.”

Chung doesn’t blame human resources departments, but he is quick to point out the irony of the situation. The state has welcomed formerly incarcerated students onto community college campuses for years — California leads all other states in making public education accessible to both the incarcerated and formerly incarcerated — but those very same students haven’t been able to get jobs on campus.

“Was there a safety issue when I was a student? No,” said Landin, who submitted her application on Jan. 4. “If they deny me because of my conviction history, is there really a safety issue?”

Arambula, too, would like to see this change. “Barriers need to be broken to hire our students back,” he said.

He is aware of the policy guidance and looking forward to greater clarity. “I think this legal opinion would help separate what crimes might be an issue and what crimes shouldn’t be,” he said.

Chung agrees and he hopes that the policy will make it easier to hire Landin and Garrett, whose convictions might have been difficult to assess in the past. Garrett’s conviction — though decades old — is drug-related, and Landin’s conviction — which is neither a sex nor a drug crime — is more recent. No law prohibits their hiring, but both have reasons to be concerned about their job prospects. Landin, in particular, is nervous because her conviction was recent.

That fear, Chung said, “is a really great example of how your conviction always kind of follows you and makes you feel like an imposter.”
Chung is hopeful that the new policy will make applicants like Landin more welcome. “There’s so much research that says, if you are a Hispanic-serving institution, it might make sense to have Latinx teachers,” Chung said. “If you’re going to be a formerly incarcerated-serving institution, it might help to have people who have this expertise of prior incarceration.”

According to Chanelle Whittaker, interim vice chancellor of human resources and employee relations for the Peralta district — which includes Laney College — the district complies with “ban the box” rules.
In an email to the Express, Whittaker wrote that the district “no longer requests or obtains conviction information relating to any job applicant until after a conditional offer of employment is made.” However, Whittaker did not provide any written policies showing how human resources staff assess conviction histories of applicants once they’re discovered.

“Hiring formerly incarcerated leaders is a necessary precursor to robust programming,” Chung said. “That’s really just a simple kind of logic.”
The logic has already been working at Laney College, thanks to Landin and Garrett’s work. They support hundreds of students at Restoring Our Communities and are changing the fabric of the Laney campus. “Her background is something I can relate to,” said Mario Anthony Whitty, a first-year Laney student, referring to the common ground he found with Landin. “It’s a blessing to have her here.”

Even the college president is aware of Landin and Garrett’s impact. “I feel so fortunate to have them here at Laney College,” said President Tammeil Gilkerson in an email to the Express. “Talk to any student and these two have helped facilitate life changes and brought hope.”
Landin was reminded just how much change is possible when a student told her that they had shared their court date with a professor — information that only six years ago Landin herself felt afraid to share.
Now, with the chancellor’s much-needed legal advisory out and her application in, Landin is summoning courage for the next hurdle — her job interview — and blazing a path for others to follow. 