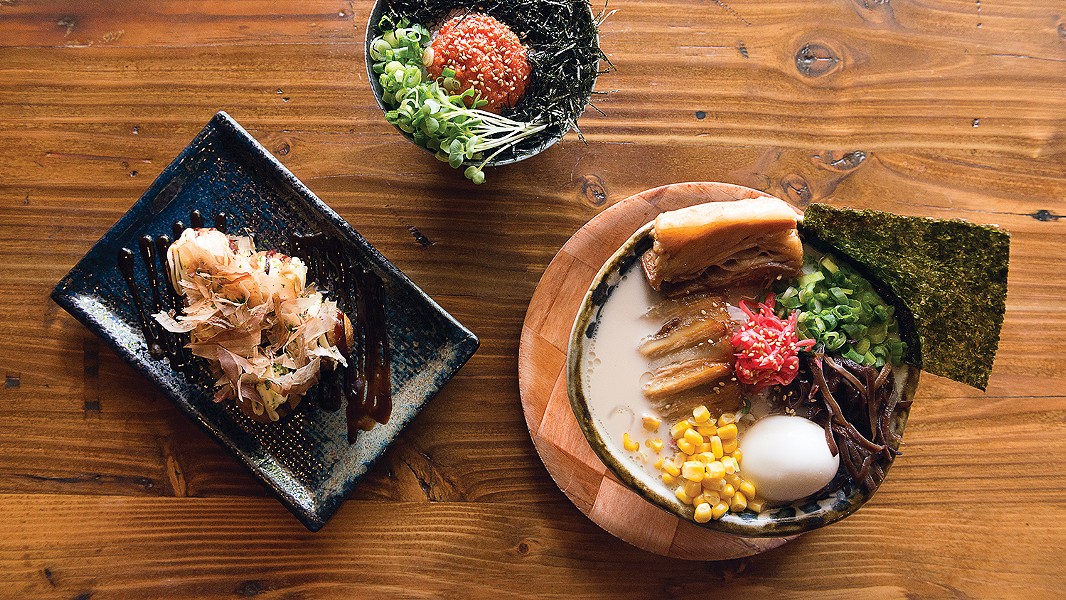 Berkeley touts itself as the cradle of "California cuisine" but the style has more to do with French and Italian cooking than native food traditions. Which is why Vincent Medina, a member of the Muwekma Ohlone tribe, opened Cafe Ohlone this past summer deep in the heart of xucyun (Berkeley). (Although, according to Twitter, Cafe Ohlone is currently on hiatus and will announce regular hours in early October.)

Cafe Ohlone is an outgrowth of Mak-'amham, an organization that aims to strengthen, revive, and reclaim indigenous food space of the Bay Area's first people. The cafe is Ohlone-run, serving only pre-colonial, pre-contact foods, Thursday through Saturday on the back patio of University Press Books.

Diners can enjoy a meal of acorn bisque, bay laurel roasted duck breast, venison mushroom stew, and white sage tea, with staff providing information about the food's medical uses or cultural significance. Reminders that not only is native food still being made, so is native history.

In the East Bay there is no lack of cafes that make and serve good coffee. In somewhat shorter supply are cafes that make good and serve. 1951 Coffee Company is one of the latter. The cafe assists refugees in their resettlement by providing job training and employment, while also educating the clientele on issues facing refugees.

The location of its flagship cafe is a poignant one. One block away is the First Congregational Church of Berkeley, where, in 1942, residents of Japanese ancestry were forcibly gathered just after Executive Order 9066 mandated their eviction, removal, and incarceration. Seventy-six years later, another xenophobe at the helm of the country, the cafe asks customers not only to learn from history, but learn from the present. Lest we forget.

Continuing the theme of refugee success, chef and restaurateur Nite Yun was born in a Cambodian refugee camp in Thailand after her parents fled the Khmer Rouge. The family moved to the U.S. when Yun was 2, first to Texas and then to Stockton. Yun later moved to the Bay Area as an undergrad at San Francisco State University studying nursing, but dropped out, eventually finding a very different way to serve others after enrolling at La Cocina food incubator. Yun had a vision to recreate a "golden age "of Cambodian food and culture, a place where customers could enjoy Cambodian street food and '60s Khmer surf and funk rock. She realized that dream with Nyum Bai in Fruitvale. Success has since come quickly. The San Francisco Chronicle named her a rising star chef, and Eater named her a Young Guns winner. Then Bon Appetit magazine named Nyum Bai on its list top 10 list of America's best new restaurants. Cambodian food has arrived.

Another La Cocina alum, Reem Assil first entered the East Bay food scene selling man'oushe — Lebanese flatbread — at farmers' markets and becoming a worker/owner at Arizmendi. Then last year she opened Reem's, an Arab street bakery, in Fruitvale Plaza. This year Assil expanded to Jack London Square with Dyafa, a restaurant whose menu might best be described as rooted somewhere in the Middle East Bay. Case in point, a flatbread wrap of turmeric-spiced cauliflower, eggplant, feta, and roasted garlic called — what else? — Steph Curry. "Dyafa" is Arabic for hospitality, and customers are sure to experience just that.

Yuki Sakakibara looked no further than Temescal when he decided to make the jump across the bay to open a second location for Marufuku Ramen, only a year after opening the first location in San Francisco's Japantown. For a neighborhood otherwise well-served with food options — and increasingly with brew options — there's a surprising lack of Japanese restaurants in and around Temescal, even as the ramen wave continues to rock the Bay. Where Marufuku distinguishes itself is in the attention given to the broth served with its traditional thin, straight hakata-style ramen. Pork bones are slowly simmered for 20 hours to make the clouded tonkotsu broth. Chicken bones and feet get the same amount of time on the burner for the paitan version. The method gives a depth of texture and flavor unrivaled by the competition and revelatory for those who grew up on instant. Vegan options also are available.

Grain is a seed. Hops are flowers. But malt is enigmatic — something done to milkshakes back when servers were called jerks. Malt is just barley or other grain that has been steeped, sprouted, and dried. The Rake, the taproom of Admiral Maltings, features the ingredient in 20 draft beers from breweries that use their malt. Admiral sources grain from Northern California growers, and then sprouts and dries their malt at their converted naval warehouse in Alameda, giving local brewers a local option for an ingredient they would otherwise have to source from suppliers outside the Bay, or even out of state. Hops, after all, is optional. Malt is a necessity.

It's a 10-hour plane ride from Oakland to Paris, but only about a 10-minute drive to Albany, where Rotha Ieng opened his French bakery earlier this summer. Ieng is a graduate of Parisian culinary school Ecole Ferrandi and trained under pastry chef Pierre Hermé, the Yves Saint Laurent of French pastry and the source of the macaron craze. Alas, macarons are not to be had at Pâtisserie Rotha, but Ieng does make authentic brioches, madeleines, and croissants, sure to impress even those who insist on pronouncing it kwah-ssohn. Paris can wait.

Samba, soccer, and supermodels are the trite summation of most Americans' understanding of Brazil. Which is exactly why Delvira Rodrigues opened Brazilian Bread in North Berkeley earlier this year. Rodrigues specializes in pão de quiejo, literally "cheese bread," making seven different flavors of the wheat-free, tapioca-based cakes that for work-a-day Brazilians fulfill a gustatorial role somewhere between French fries and doughnuts — food grabbed on the go, enjoyed with a cup of coffee and a newspaper, or else while running to catch a train. Rodrigues also offers catupiry — a soft cheese — sandwiches, yuca fries, acai bowls, tapioca crepes, and frozen pão de quiejo that customers can take and bake from home, regardless of train schedules.