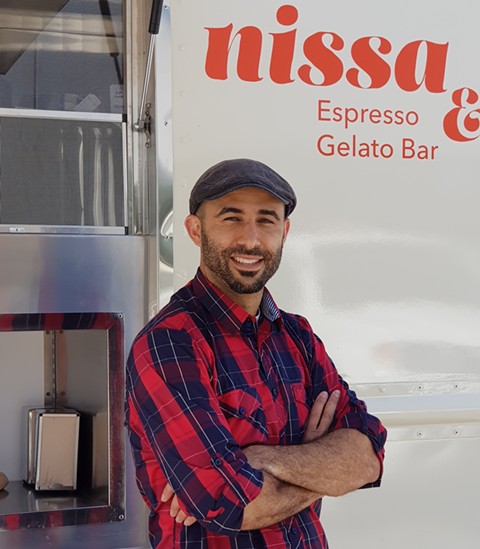 What’s not to love about a gelato and espresso truck in one? For one, if it’s hot, you can have a cold treat. If it’s cold, you can get a piping-hot espresso drink. If you’re undecided, you can get the best of both worlds with an affogato.

That’s the idea from Alex Nerguizian, who dreamed up the idea of Nissa Espresso & Gelato Bar (@nissatruck on social media). The new food truck debuts July 4 at the Berkeley Marina fireworks celebration and will serve affogatos, alfajores, espresso drinks, and plenty of gelato.

The Berkeley resident is a financial consultant, and he also teaches entrepreneurs and nonprofits about financial education and asset-building. “Little by little, I started getting this itch of starting a retail business,” Nerguizian said. “Even though I’m self-employed, it’s different being a consultant than to have an actual retail business.”

His truck will serve locally made gelato and feature coffee made from San Leandro’s Proyecto Diaz Coffee Roasters. Alfajores, the dulce de leche sandwich cookies, and other baked goods will come from Oakland’s Wooden Table Baking Company. All are locally owned, small businesses, and the gelato maker and bakery are run by Argentinian Americans.

“I’m from there, so I wanted to incorporate the country in some way, without really flashing the flag,” Nerguizian said.

While the truck will initially feature gelato made by another local company, the goal is for Nerguizian to make his own gelato. The name Nissa comes from a combination of his two daughters’ names.

This is his first food business, and Nerguizian believes that by doing and learning, he can teach and help others down the line.

“I’m a true believer in action,” he said. “I feel like we all talk about things we want to do in life. I asked myself, ‘What’s the boldest move I could take today?’ And I said, ‘Alright, I gotta buy a truck. Then I have to build it.’ I bought a delivery truck and it got built out. I didn’t buy an old food truck. I got a shell, and we built it from square one.”

Nerguizian also believes more entrepreneurs will use mobile spaces like a food truck because of the high cost of real estate in the Bay Area — from food vendors to tattoo artists to clothing retailers.

The financial consultant and entrepreneur said he has already started developing a workshop on how to start a food truck business based on his experience so far. “I’m showing my students that in the end, you gotta try and you gotta do,” he said. “As much as you think you can study every angle and be super prepared, you have to take action.”

In addition to the Fourth of July event, Nissa plans to cater private events and be at other public events where food trucks are featured.

Editor's Note: A previous version of this story misstated that Proyecto Diaz Coffee Roasters was also owned by an Argentinian American.