June 04, 2015
1 comment
The drug war took a one of its biggest shellackings in history this week as the Republican-controlled US House of Representatives voted to cement the federal cease-fire on medical marijuana, and nearly gave up the weed war entirely.

A more far-reaching amendment to protect state-legal recreational cannabis failed in its first-ever floor vote Wednesday, but went down swinging, losing by just sixteen  votes. The bill is certain to resurrect in future sessions.

Dan Riffle, director of federal policies for the Marijuana Policy Project, stated that Wednesday's vote was "the most significant step Congress has ever taken toward ending federal marijuana prohibition [and[ it received an impressive amount of support. It’s not really a question of whether this measure will pass; it’s a question of when it will pass.”

“Just about every candidate for president has said states should be free to determine their own marijuana policies,” stated Riffle. “It is time for Congress to get serious about addressing this problem and repeal federal prohibition so that states can regulate marijuana as they see fit.”

Congress first declared this cease-fire in December and the new rider continues the provisions.

“The majority of the states have said they want medical marijuana patients to have access to the medicine they need without fear of prosecution,” said Farr. “For the second year in a row, the people’s house has listened to the will of the people and voted to give them that access.”

“This impressive vote,” said Rohrabacher, “is deeply gratifying. It shows the people’s representatives really can reflect the overwhelming sentiment of Americans to do the right thing. Too many patients, for too long, have suffered under a regime that encourages doctors to prescribe opiates rather than the cannabinoids they deem much safer and more effective. It’s the federal government and out-of-control Justice Department enforcers who have acted as the real gateway drug. The good news is that the House of Representatives just took away that deadly connection.” 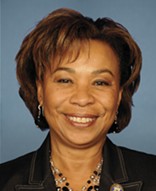 “The federal government should never come between patients and their medicine,” stated co-sponsor Congressmember Barbara Lee, D-Oakland. “Passage of this amendment brings us one step closer to providing relief for those suffering from multiple sclerosis, glaucoma, cancer, HIV/AIDS and other medical conditions.”

DOJ spokespeople have said that Rohrabacher-Farr does not apply to California’s dispensaries, which remain subject to an ongoing federal crackdown.

The lawmakers refute that interpretation of their language. Farr's office stated: “With a clear voice we have once again said to the DOJ:  Stop wasting our tax dollars attacking patients. Let’s spend those funds more wisely going after real criminals and not sick people.”

“With more support than ever before, today’s passage of the Rohrabacher-Farr medical marijuana amendment is a monumental victory in a revolution underway across America to reform and modernize our marijuana laws,” stated Congressmember Earl Blumenauer, D-Oregon, an original cosponsor of the amendment. “Well over 200 million Americans have access to legal medical marijuana, and at least one million people use it in accordance with state laws. Removing the threat of interference from the lives of patients, businesses and doctors in the 41 jurisdictions that have approved medical marijuana is the right thing to do.”

The House also voted to protect state industrial hemp laws, protect state laws allowing use of CBD oil by children suffering from severe seizure disorders, redistribute $23 million in DEA marijuana funding, and ban the DEA from engaging in mass surveillance of US citizens.

“Even Congress is now acknowledging the failures of the drug war and of the DEA and its invasive methods,” stated Major Neill Franklin (Ret.), executive director of Law Enforcement Against Prohibition. “Conservatives believe states have the right to decide their own rules, libertarians understand prohibition infringes upon civil liberties, and liberals know the effect prohibition has had on racial minorities, families, and communities.”