Cal Shakes is a quintessential part of summer in the East Bay. 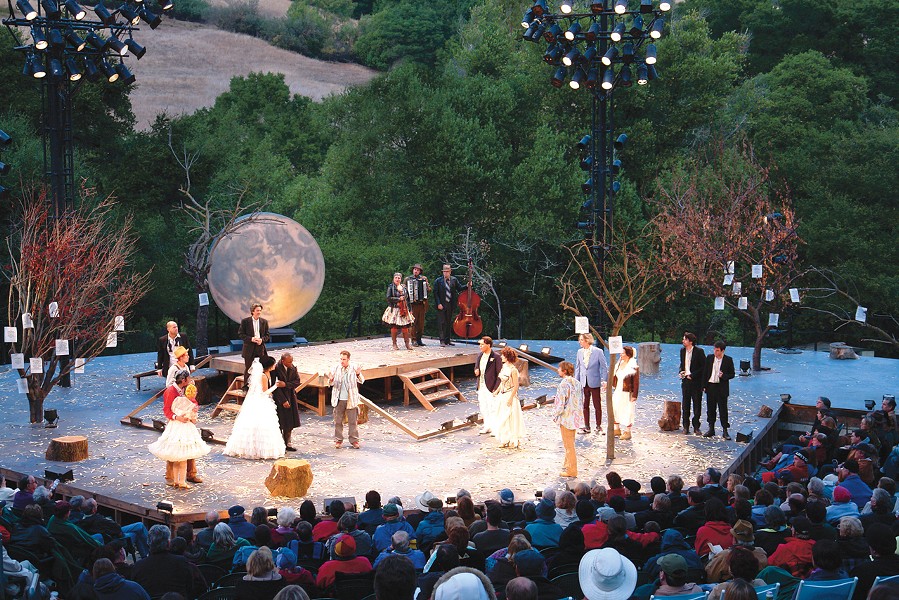 At least that is the case according to fans and staff of the outdoor theater company that has performed at Bruns Amphitheater in the Orinda Hills ever since 1991.

Cutting free of similarly stuffy theatergoing rules — no eating, drinking, sunscreen, or kids — is highly encouraged during summer at Cal Shakes. Yummy nibbles, small meals and ever-flowing Peet's coffee are available at the bustling, recycle-conscious café, and bring-your-own-picnics are allowed in the amphitheater. (An extra blessing: After a renovation in 2010, adequate bathrooms keep lines moving swiftly during intermission.)

Cal Shake's liberality occasionally results in a challenge, such as one night last season when an audience member consumed an entire chocolate cake. The tantalizing scent, methodical fork-to-mouth rhythm, and astounding display of human gastronomy distracted from onstage action. But the lucky eater of cake — who didn't offer to share with neighbors — was clearly thrilled, giving the play (or maybe the excellence of his cake) a standing ovation. Lusting after the food or fine wine of nearby audience members is a risk. But delight can be found in the casual atmosphere that allows a person to eat very good cheese while watching almost every character in a play by Shakespeare come to slaughter, or not.

Other sensory challenges also occasionally impose upon hedonistic pleasure, with summer sizzle at matinees sending handheld fans fluttering, or dense, bone-chilling fog and temperatures occasionally forcing people to huddle under the green blankets available for rent. Buzzing bugs, a rare helicopter, small airplane, or distant bulls mooing might interrupt the action, but are deftly handled by well-rehearsed actors. An audience with its mind set on summer adventure, after all, typically laughs at the ironic timing of a moo or engine roar during a Shakespeare soliloquy or Brecht monologue. Dismissing minor matters for the greater good of the experience is part and parcel of summer at the Shakes.

And of course, Mother Nature steps up with a magnificent backdrop at about 9 p.m., as sunset's gorgeous, golden glow sets off deep green tones of chaparrals and gnarly old oak trees embedded in the Orinda Hills before stage lighting begins its magic.

"We're committed to telling stories not as an escape from the world, but rather an invitation to the world, to all its wonder, flaws, challenges and delights," Artistic Director Eric Ting said.

Ting, who arrived as artistic director in 2016, pointed to the plays this season to highlight the organization's premium offerings. Wrestling with issues of consent and nature-in-disorder is central in the season opener, A Midsummer Night's Dream, Shakespeare's tale of four young lovers galavanting in the woods among fairies, spirits, and crisscrossed sexual and emotional attractions. "[We] examine our notions of goodness in a world that doesn't reward goodness in Good Person of Szechwan, resist gender assumptions in Madhuri Shekar's exquisite play, House of Joy, and tackle toxic exceptionalism in Macbeth," Ting said. "And yet, Cal Shakes delivers all this with comedy, music, muscle and wit."

Ting is especially enthused about directing Good Person, Brecht's framing of the Chinese fable that addresses questions of gender, patriarchy, and the societal consequences of a fast-growing wealth gap. Shen Te is the "good person" of the play. "From the moment she's identified as the sole good person in all of Szechwan by three wandering gods, she's immediately at war with herself," he said. "Because we have such incredible — and rightfully so — standards of goodness that we aspire to; if we can't live in our own contradictions, our own complexities, we risk quickly losing our way. That's something I'm spending a lot of time with — how to be good, and still live with our flaws."

Although flaws often lead to what makes an unusual character believable or human, Ting says that among his greatest revelations as artistic director has been rejecting the notion that diversity must be accompanied by tragedy. "We think the stories we tell, when they're stories of communities we don't often see on our stage, need to be stories centered on plight, on persecution. But rather, we've learned to seek out narratives that celebrate what is extraordinary about different cultures. Sure, there are challenges, there's conflict; it wouldn't be theater otherwise. But we're most interested in human resiliency; that bit of grace and power that allows us to laugh and sing and dance in spite of it all."

Aware of past success — a stable history since 1973 and programs like a New Classics Initiative that shares Cal Shake's productions and the talents of local artists with theater groups nationwide (2017's black odyssey by Oakland-based playwright Marcus Gardley, one example among others), prompt future excitement. "I think folks are hungry to not simply throw away our old stories, but to reinvent them for our contemporary moment, to build the sort of connections that reach back to who we were and make sense of how we've come to where we are."

If Ting has his way, where we are in summer is shivering, sweating, eating copious amounts of chocolate, dialoguing with artists and audience members at Cal Shakes. Above all, we're to be alive to summer, the next moment, wonder, flaw, challenge or delight. Then, and only then, we'll do Cal Shakes; we'll do summer.