The former frontperson of Pookie & the Poodlez calls out pettiness and bullying in the punk scene. 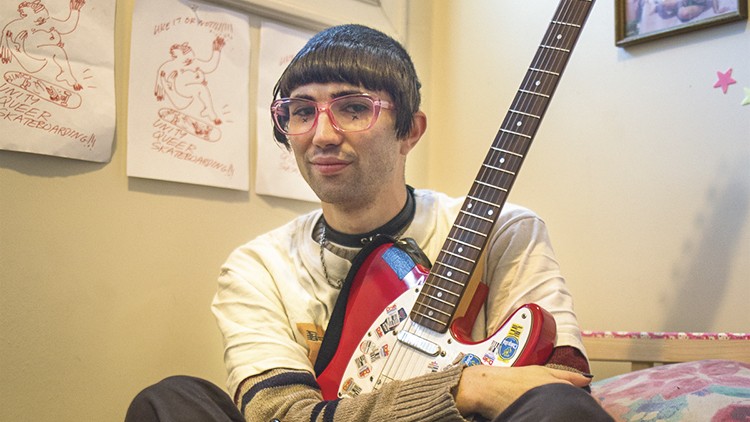 Trevor Straub and Stevie Shakes, of the punk duo Evil Twins, were sharing one microphone, their voices shooting from a shoebox-size speaker like candied barbs of sound. Straub, in a black leather jacket with pink paint splotches and x's drawn beneath their eyes, strummed a bass while Shakes stood battering a floor tom with a tambourine taped on top. They were in front of a bookshelf marked "essays," but their songs were more like poems written in emoji and punctuation, all spirited and expressive and to the point of their feelings. After they ran out of songs, they played the first one again.

It was the soft opening for the new headquarters of Unity, a queer skateboarding collective founded by visual artist Jeffrey Cheung, in the loft above downtown Oakland bookshop E.M. Wolfman. And it was chock-full of people: spilling out onto the sidewalk, winding up the staircase lined with skate decks freshly emblazoned with surreal nudes by Cheung, and cheering the drag performers who strutted between bands. Since early last year, Unity has become a lifeline for skaters who've felt repelled by the sport's macho sameness, documenting queer skaters online and meeting up with them in-person. Cheung has painted more than a thousand decks, and Straub has broken 20 of them.

Straub, a skater and 'zine publisher who used to front Pookie & the Poodlez and uses the gender-neutral pronoun "they," launched Evil Twins as well as Twomp Sax at about the same time that they connected with Unity. For years, they toured as a member of the garage-rock outfit Nobunny but gradually soured on the homogeneity of the scene. Punk was once Straub's way out of skating. Then skating saved them from punk. "All that touring, I didn't really meet any other queer artists," they said in their West Oakland backyard recently. "Just a lot of straight rock 'n' rollers who made me hate The Ramones."

To Straub, 25, the punk scene is rife with pettiness and backbiting bullies — "worse than high school," they said. It's also a bottomless well of inspiration. Their cat is named Matty after Matty Luv, late frontman of the storied Mission District punk band Hickey. Tacked on their bedroom wall is a letter from Aaron Cometbus, the prominent East Bay 'zine publisher who, Straub proudly relayed, wrote that each of their miniature 'zines is "like a song." Straub is the consummate fan who's been profoundly disappointed — a combination at the core of their newest music and renewed interest in skateboarding.

Straub grew up in the back of an Antioch funeral parlor with their mom, who made-up the corpses. They used to kick-flip over coffins, and the embalmer, who Straub calls "heavy metal Tom" in a 'zine about their childhood, would drop them off at the skate-park in a long, black hearse. "That always felt really cool," they wrote. They started skating competitively, getting sponsored by a local shop after snaring a statewide title. Then they broke the same ankle three times and effectively retired at the age of 14, shifting their focus from skating to music. Heavy metal Tom bought them their first electric guitar.

The next year, Straub's friend Pascual Santiago, who'd later play in Pookie & the Poodlez, took them to Berkeley's landmark all-ages venue 924 Gilman Street to see Hunx & His Punx, Nobunny, and The Younger Lovers — all scrappy, campy East Bay garage rock outfits. "Brontez [Purnell] drummed with branches that he'd found outside and then made out with his bandmate on stage," Straub recalled. "I realized I didn't need fancy gear to be in a band, and it was really inspiring for my sexuality — I still have the flier."

At 17, Straub got their GED in lieu of graduating high school and moved into a punk house in Brentwood called the Village House; they were evicted for having shows, so they had a yard sale to raise money to move to Berkeley. By then, Straub was a huge Nobunny fan. "I hitchhiked to a Nobunny show in Arcata and ended up in a mask playing tambourine on stage," Straub said. "It was amazing. They were all really supportive."

For most of the time Straub fronted Pookie & the Poodlez, they were also touring as a member of Nobunny. Both groups were associated with the garage-rock scene symbolized by Southern California label Burger Records, coupling Ramones-style simplicity with lowbrow, trash culture themes like so-called "budget rock" groups The Mummies and Supercharger before them. But Straub grew disenchanted with the Burger scene, especially what they say is the commercialism prevalent in its stronghold in Southern California. Other musicians suggested Straub model for Yves Saint Laurent, whose former creative director Hedi Slimane scanned the scene for muses. "I did not relate," they said. "Like, what?"

They moved to Chicago in 2016, living in the basement of a record shop in between epic tours in a Toyota Corolla with Nobunny. They were eager to be near the voguish Midwest punk scene represented by groups such as Coneheads and Warm Bodies, but they felt rejected by members of the bands they admired, scorned for their association with Burger. "I'd hear things like 'Burger Records bitch.'" By then, they recalled, "I hated being known to everyone as 'Pookie.'"

Straub moved back to Oakland after less than a year, sick of the garage-rock scene as well as the dismayingly un-weird, jock-like punks. (Punks are likened to jocks in two of Straub's new songs, while another calls out a local punk for bullying by name.) That's when Straub learned about Meow Skateboards, a Los Angeles company that centers women, and met prominent Meow skater Lacey Baker, who turned out to be a fan of their music. "That kicked it off," they said. Straub started skating again for the first time in 10 years. "And then [Cheung] said he wanted a platform for queer skaters called Unity."

Straub is a regular at Unity's skate meet-ups, which reflect the community they always sought in music. And whereas Pookie & the Poodlez skewed toward pastiche, Evil Twins and Twomp Sax are distinctly the work of Straub, mirroring their inventive, wildly stylized approach to skating. "I really just wanted a boyfriend for the longest time and thought I'd meet someone on tour but it never happened." Referring to their partner, who also skates for Unity, Straub continued, "Turns out Mae was right here in the Bay the whole time."