Despite what Romney Says, Green Energy Is the Answer

During Mitt Romney’s surprise visit last week to the East Bay, the Republican presidential nominee made it clear that renewable-energy subsidies will be at the center of his campaign. At the shuttered Solyndra solar plant in Fremont, Romney characterized public investment in green energy as an assault on free enterprise and an example of big government excess. The free market, Romney contends, doesn’t need help from Uncle Sam, and Solyndra was the number-one “failure” of President Barack Obama’s first term. 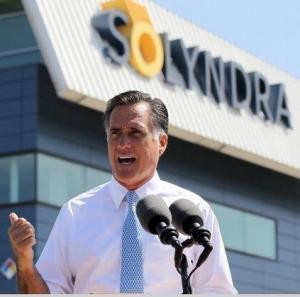 However, as much as Romney and the Republicans want to demonize public subsidies for green energy, the truth is, they still pale in comparison to the taxpayer giveaways for aging, polluting industries like fossil fuels and nuclear power. Indeed, even though Obama’s Energy Department made the wrong bet on Solyndra and it’s expensive solar technology, the amount of taxpayer subsidies for nuclear power and fossil fuels remains astronomically high. Currently, oil and gas companies receive at least $4 billion in direct annual subsidies from the US government — and that figure doesn’t include the hundreds of billions of dollars we have spent in the past two decades on foreign wars whose true intent is to protect our oil supply.

There are other hidden costs as well. Paul Epstein, director of Harvard Medical School Center for Health and the Global Environment, has estimated that the public health costs from coal power, from mining to air pollution, could be as much as $500 billion annually in this country. Moreover, if the true costs of oil, gas, and coal — including the public subsidies and the costs to our health and environment — were added to the consumer price for these energy sources, then what we pay at the pump, not to mention on our monthly utility bills, would be unaffordable.

In truth, the United States and other industrialized countries have a long, storied tradition of heavily subsidizing energy exploration, development, and production. Nuclear power, the major new energy source of the last century, absorbed $50 billion in public subsidies in the US from 1973 to 2003. Subsidies such as these have made our daily energy costs much less expensive. And so the idea that we shouldn’t make the same investments in green energy and that renewables are now receiving unprecedented and unwarranted public help is not grounded in reality.

Obama, in fact, deserves credit for his efforts to end the $4 billion in annual direct giveaways to Big Oil and Gas, rightly noting that the prime beneficiaries of this taxpayer largesse have been reaping record profits and don’t need our money. Obama’s efforts, of course, likely will fail this year because of staunch opposition in Congress from Republicans who also happen to receive huge campaign donations from the oil and gas industry. Romney, not surprisingly, also wants to keep the oil and gas subsidies in place — apparently because, in his world, only companies that make billions in profits while polluting our planet and harming our health deserve government handouts.

Romney and the Right also contend that green energy is just a pipe dream and that it will never supply our needs. As a result, investing in it, they say, is just a waste of money. But late last month, Germany proved that this argument has no merit either.

According to Reuters, Germany has installed so much solar power in recent years that it produced one-third of the country’s electricity needs on a weekday, and half of the total electricity used in Germany on Saturday, May 26. Norbert Allnoch, director of the Institute of the Renewable Energy Industry in Muenster, said that a whopping 22 gigawatts of solar power fed into Germany’s national grid that day. "This shows Germany is capable of meeting a large share of its electricity needs with solar power," Allnoch said. "It also shows Germany can do with fewer coal-burning power plants, gas-burning plants, and nuclear plants."