The Oakland-based musician goes at it alone 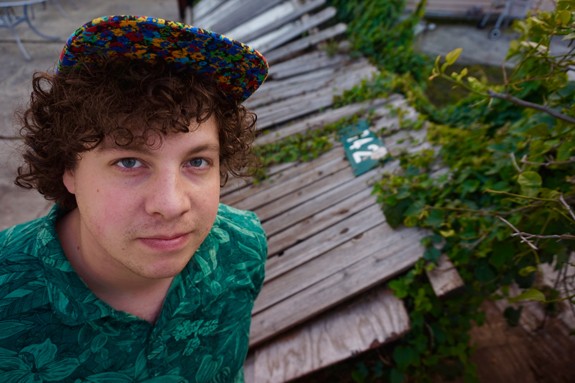 If every musician has a unique story, Perhapsy’s is of an Oakland artist reckoning with all sorts of trials — and triumphs.

The man behind Perhapsy is Derek Barber, best known for his work as guitarist and songwriter for several local experimental-indie bands, most notably Bells Atlas, Astronauts, and Madeline Kenney. Apart from playing in the former, which he describes as “his band,” Barber’s solo work lives under the above moniker, whose latest release is an EP simply titled The (which came out March 24). Barber admitted that he’s gets pleasure from the odd title. “It’s sort of humorous and a bit silly, in a grandiose sense,” he told the Express.
The name Perhapsy comes from a poem by e.e. cummings, called “warped this perhapsy...,” which is a nostalgiac piece for Barber. “My old bandmate in college came up with the name when we were still an instrumental, jazz-influenced, post-rock band. I just liked the name, so I’ve kept it as a moniker over the years.” he explained.

The is a well-crafted indie-pop album highlighting Barber’s unique songwriting sensibilities. Expect fluctuations in melody, and a compositional style that varies from electro clanks to heavy, washed-out whispers, and reverbed, distorted vocals. His experimentation is mixed in with an innate understanding of pop melodies that at times resembles The Beatles and George Michael.
Ask him how he hears his music, and Barber will describe it as experimental pop — though he feels that can be a trivial label. “Basically, I just love pop music wrapped up in ambient sounds and weirder textures,” he explained, attributing the pastiche of “weirder textures” to his love of post-rock and jazz.
Barber grew up in Mansfield, Ohio, a small town whose claim to fame is hosting the filming of the 1994 drama The Shawshank Redemption. He lived in a home with a supportive and talented family, and wrote his first song in his father’s painting studio in his family’s attic when he was 13. And, like many, he was heavily influenced by Nirvana’s “Smells Like Teen Spirit,” and his very first cassette tape, Oasis’ What’s the Story, Morning Glory?

Barber was living in Nashville and on tour when he experienced a health incident that caused him to be hospitalized. He since was diagnosed as bipolar. “It’s not easy to live with, but it’s also something I’m learning to find pride in — rather than feeling afraid others will find out,” he said.
Now in Oakland, he says it’s been a bit tougher to land gigs as a solo artist. “Not that there’s anything wrong with shows with conversing styles, because those can still be the best. But I think, artistically, it’s nice to find some common ground,” he said.

Barber has been through a lot in his young life. But, courageously, showed resilience, humility, and a strong sense of his future. “I’d really like to play as many fun shows as possible. There’s been a few recent smaller and DIY shows here in Oakland that have been really special to me. I think it’s a really exciting time to be playing music here.”