Environmentalists say Bay Area regulators are continuing to drag their feet on dealing with air pollution from refineries. And residents in vulnerable communities are paying the price. 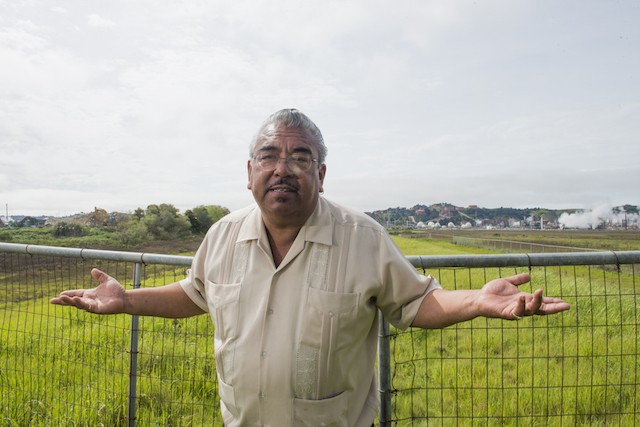 “Your policies are supposed to be protecting our health,” said Vallejo neighborhood activist LaDonna Williams. “You’re failing us.”
Andres Soto, organizer with Communities for a Better Environment, or CBE, accused the district staff of “colluding, cooperating, and bending over” for the oil industry.

Jed Holtzman of 350 Bay Area said district staffers continue to issue permits for more pollution, concluding, “We need your permitting program to line up with your stated goals and policies.”

And Ken Jones of 350 Marin pointedly told the board, “You need to look at new leadership,” alluding to Jack Broadbent, the district’s air pollution control officer, who heads the staff.

One source of this anger was the air district’s recent permit allowing the Phillips 66 refinery in Rodeo to increase the amount of oil processed in its “hydrocracker” by 4,000 barrels a day. Because the hydrocracker is used to process very “heavy” oil, environmentalists contend that this is part of a long-range plan to import more heavy, extra-polluting oil from Canada’s tar sands.

At the meeting, district staff passed out a “fact sheet” denying this charge, but activists are convinced that “the latest rubber-stamped permit is a stepping stone to tar sands,” said Rodeo neighborhood activist Nancy Rieser. She pointed to two other projects for which the refinery is seeking permits: expansion of its capacity to store propane (a byproduct produced in greater quantities by refining heavy oil) and almost tripling the number of oil tankers coming to its marine terminal.

“You say this permit is not related to the wharf expansion,” Rieser said, “but it’s your responsibility to look at the larger picture.” She and other activists accuse Phillips 66 of “piecemealing” its preparations for tar sands refining — getting permits for one small piece at a time to avoid public scrutiny.

Isabella Zizzi of the indigenous group Idle No More, said it was “very shocking” that the permit was issued at the same time a delegation from the air district, including Broadbent and board member John Gioia, were visiting Canada. They went to see the tar sands extraction and meet with representatives of First Nations battling a proposed pipeline to bring tar sands through their land to the Pacific Coast.

Gioia, a Contra Costa County supervisor who represents Richmond, said later in an interview that the trip “allowed me to see the strong connections between tar sands, the pipeline, the impact on fenceline communities here, and our global fight against climate change.” The Transmountain Pipeline, if completed, would “open up the third largest oil reserve in the world to a larger market. It would be a disincentive to investments in clean renewable technology and disastrous for our fight against global warming,” he said.

Despite the denials from Phillips 66 and air district staffers, Gioia said expanding the marine terminal “would increase the likelihood that tar sands would be refined there. We know that refining heavy crude leads to greater emissions that affect frontline communities and increased greenhouse gas emissions.”

Broadbent responded to anger over the new permit by saying that regulations left the staff no leeway but to approve Phillips 66’s request. “If they comply with all the requirements, we have to issue the permit,” he said. In an email, the air district staffers explained that the pollution resulting from the increased production would be within limits already permitted.

In an interview later, Greg Karras, senior scientist at CBE and one of the region’s leading experts on refinery activities, noted that environmentalists have been pushing for a rule to ban further increases in refinery pollution. But the air district has yet to adopt such a rule. If it had, Karras said, the Phillips 66 permit would have been denied.

In contrast to the air district’s prompt granting of the Phillips 66 permit, the public agency has unnecessarily delayed adoption of measures to reduce the deadliest form of refinery pollution: particulate matter, environmentalists say. The district’s foot-dragging, said Karras, amounts to “denial of legally guaranteed protection through interminable delay.”

Six years ago, the air district published a report identifying particulate matter, or PM, as “the air pollutant that poses by far the greatest health risk to Bay Area residents.” These microscopic particles travel deep into the lungs, through the bloodstream, and into every cell in the body.
The report said, “In addition to effects such as asthma and bronchitis, exposure to PM can trigger major health impacts such as heart attacks or strokes. In fact, the evidence indicates that exposure to PM contributes to the death of more Bay Area residents each year than more visible causes such as auto accidents.” The report continued, “PM is estimated to be responsible for roughly 90 percent of the premature mortality related to air pollution in the Bay Area.”

In other words, the stuff kills people.

In 2014, two years after the report came out, the air district board told the staff to develop a rule to reduce particulate matter from the refinery equipment that produces the most — “fluid catalytic converters [FCC].” The Valero refinery in Benicia had already cut PM emissions from its FCC by more than 90 percent by installing a “wet scrubber.”

Two years later, in December 2016, the board passed that rule, Rule 6-5. Three refineries immediately sued. In March 2017, air district signed an agreement with the refineries to win a temporary halt to the lawsuit. Through a freedom-of-information request, CBE recently acquired a copy of the settlement document. In it, the air district promised to propose certain amendments to the rule. A year and a half later, this August, the staff presented this amended rule to the board.

District staffers contend that the changes are not substantive, but Karras argues that they effectively gutted the rule. With the lawsuit, he said, “the oil industry was obviously putting pretty irresponsible and heavy pressure on the agency, but the agency doesn’t have to cave in. It’s their job to clean up the air.”

Later, Gioia added, “the refineries have sued on every one” of the air district’s recent regulations.

And even the amended rule to control particulate matter will probably not be enacted until early 2019, according to Guy Gimlen, the air district’s head of rules and strategic policy. Gathering public comment, drafting an environmental impact review, allowing time for public comment on that, then revising the rule will take until mid-December.

Meanwhile, the district is using a new law meant to promote environmental justice as an excuse to delay further action on particulate matter, environmentalists charge. The 2017 state law, known as AB 617, tells regional air districts to develop plans to clean the air in heavily polluted communities, like those near the refineries. At the Sept. 5 air district meeting, staff members said that in December they would present a schedule for studying and implementing this law, which they estimated would take until 2021.

At a later meeting, the California Air Resources Board passed a resolution, initiated by Gioia, calling on the air district to “expedite” this schedule and complete new rules for reducing refinery pollution by the end of 2020.

Karras said the air district is just delaying again. It already knows that particulate matter pollution can be cut by more than 90 percent because the Valero refinery has done it. So, he said, the air district could immediately require other refineries to make comparable reductions: “They could do it right, right now!”

The district responded in an email, “We aren’t waiting for the completion of these plans to start reducing emissions in vulnerable communities. Last year, the air district finalized the most stringent air toxics control regulation in the country.”

But that regulation will take at least five years to develop and implement, advocates say. “You’re using AB 617 to delay and delay [particulate matter reduction],” Tyler Earl of CBE told the district. “Meanwhile, people are dying.”

As a result, the air district announced it was suspending its plan to bar refineries from increasing their releases of carbon dioxide.
Climate activists say suspending this plan is unnecessary, arguing that the law doesn’t ban a “cap,” only reductions.

This report originally appeared in our sister publication, The East Bay Monthly.