My favorite street food discovery so far this year didn’t take place during a rollicking First Friday street party or at one of the East Bay’s many formalized convocations of gourmet food trucks, and it certainly wasn’t served on a porcelain plate at some sit-down restaurant.

Instead, on a recent Wednesday, fresh off a tip from the eagle-eyed grub seekers over at Chowhound, I found myself standing in front of a tiny shack of a food stand set up on a trailer in a barren West Berkeley lot. Daniel’s Caribbean Kitchen shares the lot with a small pottery shop called Jered’s Pottery (2720 San Pablo Ave.). It’s an unassuming little spot, but if you like Trinidadian food, you should head over as soon as possible. 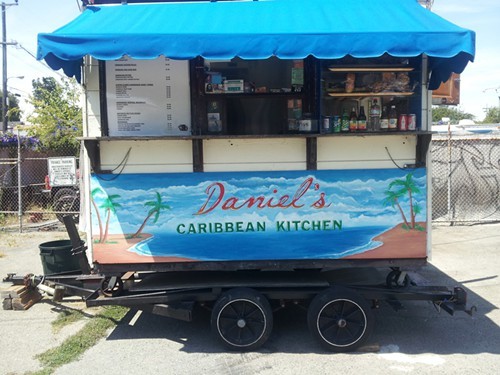 The chef, who introduced himself as “Daniel,” hails from Trinidad and Tobago, and his stock in trade are dalpuri roti wraps: flatbread that’s stuffed with a potato-and-chickpea curry and your choice of meat, the whole thing folded up so that it resembles a square-shaped, multi-layered burrito. I loved the chicken roti ($6.50), which was loaded with tender shreds of chicken and a mild curry sauce that was soaked up wonderfully by carrots and potatoes cooked very soft, practically to mush. The roti itself was soft and pleasantly chewy, the insides dusted with ground split peas, cumin, and other spices (which are what made it a “dalpuri” and not just plain old roti), adding an awesome savory quality to the wrap.

Before Daniel folds up the roti, he’ll ask if you’d like him to add some Trinidadian hot pepper sauce, and if you can handle a little bit of heat, the answer to that question, definitively, is “yes.” Shrimp and vegetarian versions of the roti wrap are also available.

Daniel’s also offers an interesting selection of homemade beverages: sorrel, which I’m familiar with, but also peanut punch and something called sea moss, which Daniel told me is a clean-tasting drink made from a kind of algae, which he simmers and blends with condensed milk. “It’s a good drink for a man,” he said. (Later, I read an article on the Internet entitled, “Sea Moss, the Caribbean’s Most Potent Sex Potion,” and regretted not making the most of the opportunity). In the end, I settled on the peanut punch ($3), which Daniel said he liked best, having grown up with the stuff. The drink is made from peanut butter, condensed milk, and assorted spices (nutmeg being prominent). It’s good — not as thick as you might imagine, and refreshing despite being quite sweet. Supposedly this, too, will help boost my virility.

During another visit, I had the chicken pelau ($6.75), the Trinidadian take on chicken-and-rice: two boneless thighs, pounded flat and slow-braised until tender, served over a generous mound of rice that’s quite similar to a pilaf, but creamier — drenched in coconut milk — and flecked with pigeon peas. Delicious.

Look, I love Off the Grid — and this new breed of high-end, “artisanal” mobile food vendors — as much as anyone, but at the end of the day this is the kind of street food I get excited about: tasty, convenient, and, just as importantly, inexpensive. Just six or seven dollars (N.B. cash only) will buy you a thoroughly satisfying meal.

Daniel sets up his trailer kitchen in the Jered’s Pottery lot every Wednesday, Thursday, and Friday, from around 11 a.m. until 5 p.m. — though that schedule is subject to change based on weather and whim. (I came by hoping for a roti fix on the Friday after the Fourth of July, and the cart was nowhere to be found.) He also sells at the Berkeley Flea Market (1937 Ashby Ave.) on Saturdays. Look for the tiny trailer with the blue facade and two small Trinidadian flags (red slashed by a black diagonal band) billowing in the wind.

You can’t miss it. And, really, you don’t want to miss out.