But Big Ag in California still thirsts for more water. Los Angeles, for instance, uses about 600,000 acre-feet of water annually, while Kern County, at the southern end of the San Joaquin Valley, consumes more than four times as much — about 2.7 million acre-feet in a typical year.

In recent years, the state's water industry, with Brown's ardent backing, has resurrected the old peripheral canal concept as the Delta Twin Tunnels, with the same essential features. These 40-foot-diameter water pipelines would tap into the Sacramento River upstream of the delta. And, as Stork noted, "With the tunnels project back on the table, some of the firebrands are turning up heat on undoing protections for North Coast rivers."

In July 2013, the agribusiness-dominated Tulare County Board of Supervisors made known its ongoing desire to tap the northern coastal rivers. "The continued over-drafted groundwater basins of the Central Valley are also a very serious threat to the economic future of California agriculture, and the Central Valley is in dire need of the development and importation of more surface water to eliminate mining groundwater," the board wrote in a statement. "The legislature should revisit Wild and Scenic Rivers status of the North Coast waters, where nearly one-third of California's water supply flows to the ocean, when there is such a demonstrated need to put available resources to their highest and best use."

One conservative ideologue who bemoans the failure to tap California's northern coastal waterways is Victor Davis Hanson, a senior fellow at Stanford University's Hoover Institution – an influential right-wing think tank. Writing in the urban-policy magazine City Journal earlier this year, Hanson stated, "Had the gigantic Klamath River diversion project not been canceled in the 1970s, the resulting Aw Paw reservoir would have been the state's largest man-made reservoir. At two-thirds the size of Lake Mead, it might have stored 15 million acre-feet of water, enough to supply San Francisco for 30 years."

Stork sees the recent resurrection of these ideas as part of a broader strategy by south-of-Delta water interests. "From their perspective, you have to find a way to put water into the delta pumps. To do that, you have to build the tunnels. Then, you can put a little more in by raising Shasta and a bit more by constructing Sites or Temperance Flat. But the really juicy parts come from attacking North Coast rivers."

Sites Reservoir is perhaps the most likely of California's four prospective new dam projects to receive state and federal funding. As Bill Kier, the former water projects branch chief of California Department of Fish and Wildlife, noted, Sites is "a reincarnation" of a facility described in Department of Water Resources Bulletin 76, known as the Paskenta-Newville reservoir in Glenn County. That reservoir's original function was to receive water diverted from the Dos Rios Reservoir, serving as a forebay to regulate the rate at which diverted Eel River water would flow into the Sacramento.

"When the North Coast rivers — the Eel and others — were given protection under the State and federal Wild and Scenic River systems in the 1970s, it was game over for Paskenta-Newville," Kier said. "Well, Sites Reservoir is just Paskenta-Newville migrated about seventeen miles south-southeast from Glenn into Colusa County."

Stork, who is a member of the California Water Commission's Stakeholder Advisory Committee, says the competition for the Prop 1 funding appears to be "a shoot-out between the two new reservoirs" — Sites and Temperance Flat. Tensions concerning each dam are ratcheting up in their respective areas. Earlier this year, two Bureau of Reclamation attorneys visited the homes of residents in the town of Auberry and informed them that, should Temperance Flat Dam be constructed, the government would be taking the family's property via eminent domain. 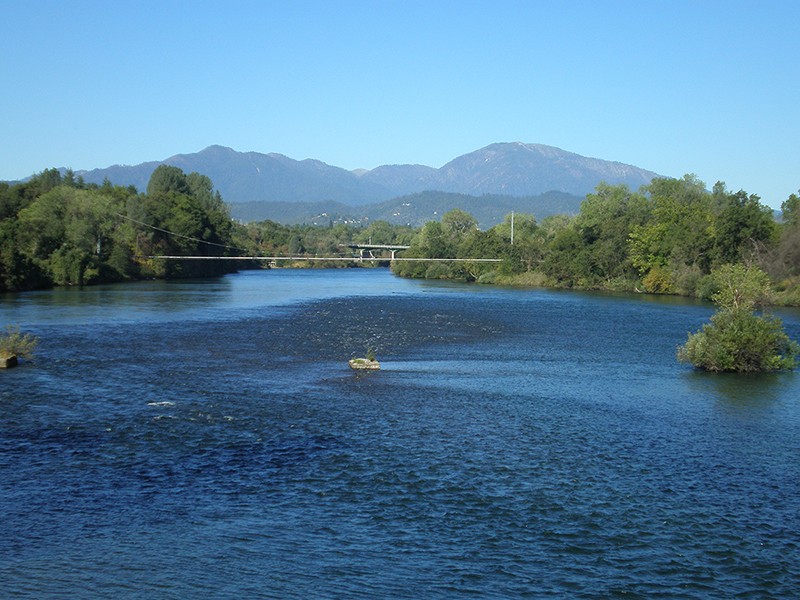 Temperance Flat is highly controversial because it would flood thousands of acres of public land in the San Joaquin River Gorge, where scenic canyons and historic sites are located. Meanwhile, an effort to promote Sites Reservoir is simultaneously ramping up in Butte and Colusa counties. On September 22, state Senator Jim Nielsen, Assemblymember James Gallagher, and Congressmember Doug LaMalfa — all Republicans — convened an event that they dubbed the North State Water Action Forum, where they encouraged attendees to flood the state water commission with comments supporting the project. But Barbara Vlamis, executive director of AquaAlliance in Chico, said the reservoir "does not have slam-dunk support up here." She said the forum's two hundred attendees were roughly divided among those in favor, against, and undecided.

Environmentalists also note that neither Sites nor Temperance Flat pencils out in terms of the costs to construct them and the amount of water they would yield. Sites Reservoir, for example, would be filled via the Sacramento River, and proponents of the project believe it would solve a problem of too much water racing down the Sacramento River during high flows. So they propose a "Big Gulp, Tiny Sips" approach in which Sites the would be filled by big gulps during wet years and tiny sips the rest of the time.

But the reservoir, according to Kier, also would be "an evaporation pan" on account of its hot, dry location and shallow size. And, he said, it's "unclear whether there is sufficient water remaining in the Sacramento River even to fill the proposed Sites Reservoir, or whether it would require raising Shasta Dam and increasing the capacity of Shasta Reservoir to make the Sites scheme work."