Advocates of other approaches to meeting the state's water needs point out that the new dams would cost California taxpayers billions of dollars, while doing astonishingly little to relieve the state's water woes. They also noted that the dams would lead to further destruction of fragile watersheds, the decimation of fisheries, and the ruination of Native people's cultures and sacred sites. And some caution that they could pave the way for a renewed effort to drain the North Coast.

Inside Proposition 1, the $7.5 billion water bond that California voters enthusiastically approved last November, is a provision requiring the expenditure of $2.7 billion on water storage projects. Many environmentalists had hoped that a substantial amount of those funds would be used for groundwater storage, but according to some close observers, it appears increasingly likely that most, if not all, of the money will go to dam-building. In addition, US Senators Dianne Feinstein and Barbara Boxer, both D-California, introduced a $1.3 billion emergency drought relief bill in July of this year to "support communities affected by drought."

This senate bill, as presently drafted, would authorize $600 million of spending on "Calfed storage projects," in reference to four dam-expansion and construction projects that the state and federal governments have studied since 2004: Sites, Temperance Flat, Shasta, and Los Vaqueros. The first three of these projects are in various parts of the vast Central Valley, while Los Vaqueros is located in eastern Contra Costa County.

Feinstein, a former longtime chair of the Senate subcommittee that funds the US Bureau of Reclamation, has been a key player in advancing the dam proposals. "Building or expanding these four reservoirs would result in hundreds of thousands of acre-feet of additional water storage, benefit urban and rural communities and increase the pool of water available for releases that benefit fish species," she wrote in a 2013 San Francisco Chronicle op-ed.

Of the four projects, the most costly would be Sites Reservoir. With an estimated pricetag of about $3.9 billion, the project calls for the construction of two large dams, each about 310 feet tall, on the Sacramento River. Engineers plans to pump the water through the Tehama-Colusa and Glenn-Colusa canals, as well as a third canal built specifically for the project that would originate north of Colusa, to an off-stream storage reservoir that would flood the Antelope Valley, located just east of Mendocino National Forest, about 10 miles west of the small town of Maxwell on Interstate 5.

The Temperance Flat project calls for building a 665-foot-tall dam on the Upper San Joaquin River in the southern Sierra foothills, northeast of Fresno. The proposed dam would flood scenic canyons and historic sites along the river. It would be the second tallest dam in California, and the fifth tallest in the United States (it would be about 63 feet higher than Shasta Dam). In February, Congressmember Jim Costa, D-Fresno, introduced a bill to authorize construction of the dam — which is projected to cost as much as $3.36 billion. 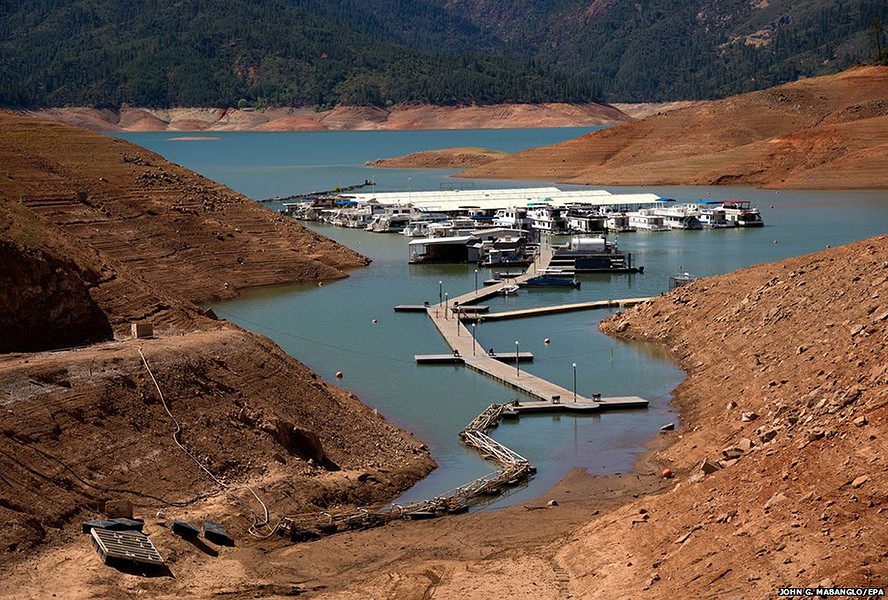 And then there's the proposal to expand Shasta Lake by raising Shasta Dam by up to 18.5 feet, at an estimated cost of $1.2 billion. The reservoir expansion would flood thousands of additional acres of the Trinity-Shasta National Forest and innumerable sacred sites of the Winnemem Wintu people. It would add 300,000 acre-feet of storage capacity to what is already California's largest reservoir, with an existing capacity of 4.55 million acre-feet. And finally, the proposed expansion of Los Vaqueros dam in Contra Costa County would add 115,000 acre feet of water storage capacity and cost an estimated $840 million.

Earlier this month, US Senator Lisa Murkowski, R-Alaska, chair of the Energy and Natural Resources Committee, held a long-awaited legislative hearing on both Feinstein's bill and drought-relief legislation produced by the Republican-controlled House of Representatives, along with several other bills dealing with Western water issues. Congressmember Kevin McCarthy, R-Bakersfield, the House majority leader, has been instrumental in advancing the new dam proposals.

Meanwhile, the California State Water Commission, the nine-member committee appointed by the governor that will rule on allocation of the Prop 1 bond money, has held meetings this month to craft guidelines for handing out the water storage money. The commission is expected to announce the guidelines next month and to allocate the funds sometime in 2017.

Some legislators have seized on the dam projects and attempted to stamp them as the start of a new era. In the mid-1990s, then-Congressmember John Doolittle, D-California, repeatedly said that the proposed construction of the Auburn Dam on the American River would "inaugurate a great new era of dam-building." (The dam was defeated largely on environmental grounds.) A new stock phrase, courtesy of Congressmember Tom McClintock, R-Roseville, is that the new reservoir projects subject to Proposition 1 and Congressional funding will help "to build a new era of abundance."

But opponents of the projects point out that California is already home to nearly 1,600 dams, plus thousands more of mostly small, privately owned ones. All together, more than 60 percent of the state's water fills up behind concrete and earthen walls. With California largely leading the way, in fact, the American West as a whole was transformed during the last century into a region of dams and canals.