Spirituality up in smoke

Cannabis and spirituality have always been intertwined, with various degrees of validity and seriousness. It was used as an entheogen (a psychoactive substance used in religious practices) as far back as ancient India, and some Hindus still consume bhang, an elixir that contains cannabis, in their spiritual practices. The Buddhist Mahakala Tantra specifically mentions cannabis as a medicinal plant. Cannabis is of course central to Rastafarianism. 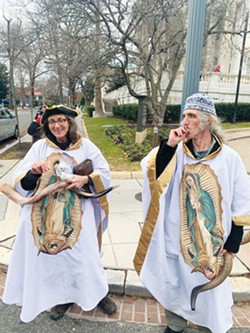 But even among many otherwise irreligious cannabis users, pot is often treated totemically. In the 1970s, a lot of guys walked around with weed-leaf belt buckles. These days, online comments are filled with people who clearly think shamanistically about pot, even as they clearly use it only to get high and play videogames or watch Adult Swim, and not for any genuine spiritual purpose. And like many cultists, a lot of them believe a lot of nonsense: that hemp will "save the world," or that cannabis will cure any disease, just for a couple of examples. That approach has been formalized, sort of, by the THC Ministry, which started in 2000 in Hawaii and now has a presence in a few dozen states, including California. There are no real religious precepts behind that organization except for the fact that cannabis has been used by many religions throughout history (which is true) and thus, they believe, its use should be considered a religious sacrament by law enforcement and tax authorities.

Meanwhile, cannabis has long attracted adherents of marginal (at least until recently) political ideologies, like libertarianism and anarchism. And if you look at the social media pages of Trump supporters and adherents of the Trump-supporting Qanon cult, you'll see that many of them are way into weed, or at least CBD. That's no real surprise, since conspiracy theorists tend to go big for quack medicine (despite the very real medical potential of cannabis and CBD, there is a lot of quackery surrounding it).

On Wednesday, the leaders of The Healing Church, a cannabis-based Christian sect located in Rhode Island, were on hand in Washington as Trump supporters launched a violent terrorist attack on the U.S. Capitol. They were there to support the president because, as they had said previously, he had "protected" their "religious freedoms." They haven't really spelled out how he did that. The church founders, Anne Armstrong and Alan Gordon, were photographed on the streets of D.C. decked out in flowing, white robes bearing images of the Virgin Mary. They carried shofars—ram's horns—which witnesses reported on Twitter they were using to smoke weed through. Armstrong was running for governor of Rhode Island in 2016 when she and Gordon were arrested for cannabis possession. They told local media that Donald Trump, who was not yet president, had "intervened." Other than their declarations, there's no indication that he actually did. Their social-media accounts reveal them to be—aside from all the pot iconography—pretty typical MAGA types. But they are also pretty typical pot cultists.

Now that pot is being legalized by states across the country, and legal-pot businesses are trying to mainstream weed as much as possible in order to attract new consumers and serious investors, it could be that such pot fetishism is beginning to fade. Suburban moms and "weed dads" are flocking to legal pot. "The Cult of Marijuana is at a tipping point: sliding down the slippery slope from hipster counterculture drug to country-wide gold rush," journalist and indie musician Rick Cipes wrote in a 2018 column. In order to reach "critical mass" he continued, "we no longer need to be hopping around in an orange robe chanting the Gospel of our Chosen One. We need to put on a business suit and prove to the nonbelievers that good people DO smoke Marijuana—and we're here to stay."

At the bottom of his column, however, was a link to his web site (420tsc.com) where he peddles weed-themed t-shirts, one of which bears a likeness of Guy Fawkes smoking a joint, with DOPE emblazoned across the bottom. We might have a way to go before we get over the tipping point.