The protests at Cal State University East Bay today included several speeches by students and faculty, and musical and spoken-word performances. In his speech, Thomas Candelario, director of Legislative Affairs of the Associated Students of CSUEB, said, “We can no longer rely on an inept legislature that continues to cut us at every opportunity. Today let them receive notice that we will no longer lie down and accept cuts to the quality of our education and future.” Another powerful speech was given by Craig Collins, a political science professor who has taught in the CSU system for seventeen years but will be laid off in the Spring due to budget cuts.

The CSUEB protest culminated with a march from the school’s Agora Stage to the Warren Hall administration building where protesters presented their demands. The ten demands were read aloud and then delivered to administrators by a crowd of hundreds shouting “Cut backs? F*** that!” The demands ranged from budget transparency to expansion of ethnic and women’s studies. Another demanded that the university “De-privatize all corporate entities on campus. We hate Aramark food and their values as a company. We don’t condone the hiring of non-unionized, contract labor.” The final demand was that no disciplinary action be taken against peaceful student activists. 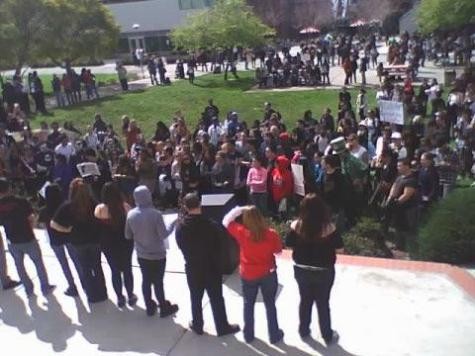 The event closed with musical performances by students from the Music Department, which has been severely cut but managed to regain some class sections by promoting their cause. The reason for their performance at the protest was “to get attention, really” according to music student Judy Cruces. Following the CSUEB demonstration several buses were scheduled to bring students to the larger rally taking place in San Francisco.