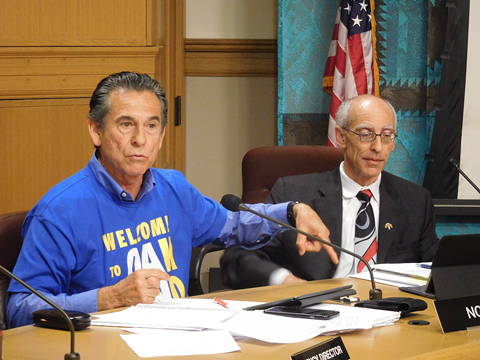 At last night’s public-safety committee meeting, Oakland Councilmember Dan Kalb told his colleagues he was “thrilled” to introduce detailed legislation that will govern the city’s new and powerful police commission. But by the end of the meeting, Kalb was visibly frustrated.

So too were dozens of activists, who have been a driving force behind the new police accountability board.

The committee deadlocked on a split vote over whether to advance Kalb’s version of the enabling ordinance or a competing ordinance favored by a broad coalition of community groups.

Kalb, who isn't a member of the committee, gave a brief presentation, to his colleagues.

As a result, the all-important package of rules died in committee.
It’s unclear how, or when, a version of the rules, which are necessary to set up the commission, will come to the full council for final approval.

“There’s a reason for the expression, ‘The devil is in the details,’” said Rashidah Grinage, of the Coalition for Police Accountability, at last night’s meeting.

Grinage was referring to the numerous powers and rules spelled out in the ordinance that will determine whether or not the new police commission can fulfill its mission civilian oversight, transparency, and accountability of OPD.

According to Grinage — who worked closely with Kalb and Gallo’s offices to draft the ballot measure that created the police commission — Kalb’s version of the enabling ordinance weakens the commissioners’ independence from the Mayor’s office, and would also prevent some Oakland residents from serving on the board.

The biggest disagreements are whether potential commissioners will be subjected to criminal background checks, and if the mayor’s three commission appointees will be allowed to comprise a majority on the powerful discipline subcommittee.

Kalb’s version of the ordinance requires criminal background checks for potential commissioners. And his version would allow two, or even three, of the mayor’s appointees to serve on the discipline committee at that same time.

“A person is more than the sum of their mistakes,” said John Jones, a member of the selection panel that will appoint four of the commission’s members. Jones and the rest of the selection panel voted several weeks ago to not require criminal background checks, but the panel’s vote isn’t binding. Rather, it’s only a recommendation to the council for how to proceed.

Jones, who is formerly incarcerated and now works as a criminal-justice-system reformer, said at last night’s meeting that he objects to the “idea that everything in my mast could preclude me from doing something in the future.”

George Galvis, the executive director of Communities United for Restorative Youth Justice, wrote in an email to the Express that background checks are “an example of the first layer of discrimination for formerly incarcerated people that denies and discourages civic participation and community involvement.” He said requiring background checks goes against recent public-policy changes in Oakland, such as “ban the box” rules that are meant to help formerly incarcerated people transform their lives and prevent discrimination from employers.

Another member of the selection panel, Shikira Porter, said required criminal background checks will likely dissuade people from applying to be commissioners, because of the impression the information will be used against them.

“It’s just another way to block and marginalize people who have been most impacted by the criminal-justice system,” she said.

But Kalb told the Express that he thinks the selection panel and mayor should have as much information as possible when choosing commissioners. He underscored that a background check shouldn’t be seen as an effort to weed out people with past convictions.

“Nothing in the ordinance says it would disqualify anyone from serving,” he said.

Oliver Luby, who works as a policy analyst in Kalb’s office, said “a criminal background might actually be considered a bonus” when the mayor or selection panel is considering someone for the commission, because the city wants some of its commissioners to represent the communities that have the most contact with the police, and have been most affected by police misconduct and mass incarceration.

On the issue the mayor having too much influence over the discipline committee’s composition, Kalb said critics were making “a big deal out of nothing.” He said it would be “insulting” to the commissioners to force them into different categories based on who appointed them, and prevent some of them from serving on the discipline committee.

“They should see themselves as all one, working together, toward the same goals,” said Kalb. He also said that the proposal to limit the mayoral appointees ability to serve on the discipline committee could lead to an unbalanced workload for other commissioners.

But members of the Coalition for Police Accountability said that allowing the discipline panel to be comprised of a majority of mayoral-appointees would undermine the independence of the commission from the mayor and city administrator’s offices.

Saied Karamooz told the public-safety committee last night that the reason the mayor’s office fought for three direct appointments to the seven-member police commission was to have some influence over its work. She explained that this is why many opposed giving the mayor the power to pick commissioners, but they compromised in the end.

“The principal has already been set,” said Karamooz, “not to have a majority of the commission be appointed by the mayor. We need to extend that simple logic to the discipline committee.”

Gabriel Haaland, the political director of the union SEIU 1021, which supported the police commission ballot measure, said it’s crucial to make sure the mayor’s appointees don’t have a majority on the discipline committee, and that it’s not a matter who the mayor happens to be at any given point in time. Haaland said it’s about “checks and balances” over the long-term.

“Ten years from now, you don’t want a mayor who can just pick up the phone to lean on someone,” said Haaland.

The public-safety committee’s deadlock means that one of the councilmembers will have to pull both version of the enabling ordinance up to the full council at a future meeting. But Kalb and other councilmembers that this could delay a final vote on the legislation until possibly after the council’s summer recess.

The police commission is scheduled to start meeting in the fall — if the new rules are approved in time.

It's also unclear where other councilmembers and Mayor stand on the differing versions of the ordinance. Mayor Libby Schaaf's office didn't respond to questions about how she might vote on the different versions, if there's another deadlock when the full council votes.

“This is the final step in working for twenty years for police accountability,” said Pamela Drake, just before the committee’s vote last night. “Even the perception that the mayor of administrator will have more power to control what goes one, especially with discipline, will weaken us.”

Kalb and the activists acknowledged that their competing versions of the ordinance are “95 percent” the same. After the vote, the councilmember debated several members of the Coalition for Police Accountability in the lobby of City Hall.

They say they’ll work with each other to try to settle their differences before the next vote.