County to Sell its Share of Coliseum Complex to Oakland A's 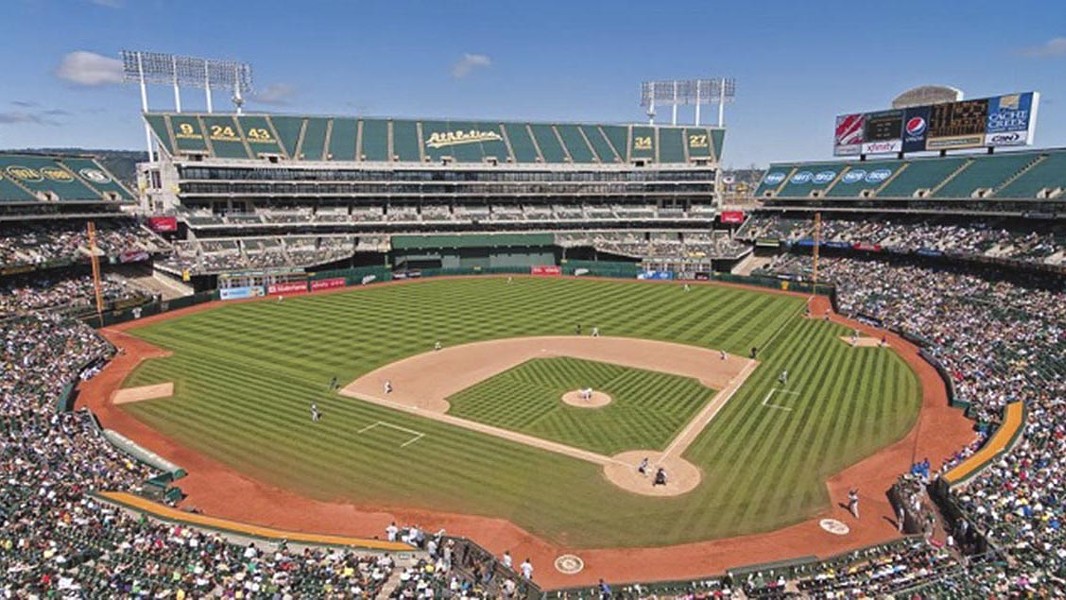 Alameda County is getting out of the sports business after the Board of Supervisors agreed last week to a nonbinding term sheet with the Oakland Athletics to sell its 50 percent interest in the Coliseum complex.

Details of the term sheet include a price tag of $85 million. The A's eventually will assume operational costs and liabilities at both the Oakland Coliseum and Oracle Arena. The proposed deal excludes a portion of land near Hegenberger Road and Coliseum Way informally named the Malibu site.

The county will continue making bond debt payments on the property, which is roughly $10 million-$13 million in yearly obligations that has stymied both the county and Oakland's tight city budgets.

Cost savings from the deal will cover the county's portion of the annual debt payment that was incurred in the 1990s to fund the remodel of both facilities, County Administrator Susan Muranishi said.

"Today's action gets the county back to its original intent — its original mission — helping those who need it the most," said Alameda County Supervisor Scott Haggerty. "Quite frankly, that $10 million to $13 million a year that we are putting toward funding a debt out with the sports teams would be better spent on people who are within our mission — health care, social services, people that are homeless."

The A's are seeking to build a new ballpark at Howard Terminal near Jack London Square and not at the current Coliseum. However, team owners hope to develop the Coliseum property for housing and retail. They also intend to maintain Oracle Arena as an entertainment hub for the East Bay.

Last week, Oakland Mayor Libby Schaaf suggested that the proposed deal might not be legal. On the morning of the supes' decision, she addressed the board to urge them to push for robust community benefits from the A's at the proposed Coliseum development.

"You are a public entity," Schaaf said during public comment. "You can't just take the money and run. You are responsible for public health in this community and other issues."

Later, several county supervisors noted the county does not have control over land-use decisions at the Coliseum property. That authority rests with the city of Oakland, they said.

Alameda County Supervisors Nate Miley and Keith Carson attempted to quell questions over why the county chose to deal with the A's and not their longtime partner at the Coliseum, the city of Oakland. At the direction of Carson, county staffmembers said they had met with Oakland officials 14 times to discuss a sale of their portion of the Coliseum to the city, in addition, to countless phone conversations and emails beginning in December 2017 through earlier as late as April 9.

"We've been trying to get the city to buy our interests," said Miley. "We have not been bashful about that and we've always said we we'll go with the entity that provides a fair offer. The A's have come forward with an offer that satisfy our needs, but also keep the A's committed to the city of Oakland."

The potential land deal may alleviate the constant problem of "too many cooks in the kitchen" that many assert led the Oakland Raiders to leave for a new stadium in Oakland.

In addition to negotiating with the city and county, the Raiders, A's, and Warriors also had to take into account the Coliseum Joint Powers Authority, which includes elected officials and appointments from Oakland and Alameda County.

"It's really becoming an imposition," Haggerty said of the arrangement he also described as a "three-headed monster." "It's too hard dealing with everybody."

The BART Board of Directors may soon approve a plan to install hundreds of automated license plate readers at the transit authority's parking lots all over the Bay Area.

A staff report released last week says the addition of the reader is intended to promote safety and instill the "confidence of the public while using BART's public transportation system."

But privacy advocates in the East Bay have long questioned the use of the readers by local enforcement for, among many reasons, its potential to capture information of individuals on a wholesale basis.

How long the data is stored and by whom has also been a great concern. Fears of collaboration with the U.S. Immigration and Customs Enforcement also has worried privacy and immigrant groups in the past.

Under the plan, BART's license plate reader data would be stored on servers at a U.S. Homeland Security fusion center named the Northern California Regional Intelligence Center (NCRIC) in San Francisco and be retained for 30 days, the report said.

"The administrator of the data collection, the NCRIC will not share information with ICE or any agency conducting immigration enforcement or removal operations," the reports added. "Information is only shared with other law enforcement possessing a need and legal right to know."

BART also could later use the license plate readers to track parking fee collection, similar to how that is done at San Francisco International Airport, according to the staff report.

Caltrans tabled its plan to rebuild the MacArthur Maze to accommodate larger trucks. ... The Alameda Unified School District is changing the name of Haight Elementary School to Love Elementary School. ... The Richmond City Council agreed to enter into an exclusive negotiating agreement with SunCal to develop Point Molate for 1,200-units of housing, along with retail, office space, and open space, Richmond Confidential reported. ... The Union City Council sidestepped the threat of a lawsuit by a Latino legal group and approved a move from at-large city elections to a district-based system. ... Alameda County Sheriff Gregory Ahern raised the possibility of closing downtown Oakland's Glenn E. Dyer jail as a cost-cutting move. ...

Year-over-year median home prices for the nine-county Bay Area dropped in February for the first time in seven years. ... California regulators approved a $373 million PG&E rate hike. The average bill will go up about $3.50 a month. Meanwhile, former CEO Geisha Williams was paid $9.3 million last year, the Mercury News reported. ... The Federal Reserve Bank in San Francisco found that the percentage of Bay Area residents who borrowed to finance higher education has nearly doubled since 2003, and the default rate has more than doubled, KQED reported. ...