Two Fremont cops shot into a moving vehicle in Hayward last year, killing Elena Mondragon. The DA's office ruled the shooting was justified and is now charging the driver with murder. 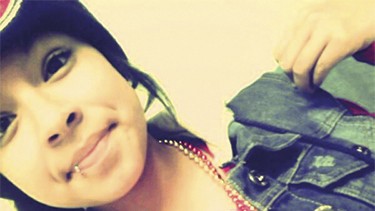 As the stolen BMW scraped against the side of an unmarked police van in a desperate attempt to escape, two plain-clothes police officers opened fire with their AR-15 rifles. They missed the driver — who was wanted for a string of violent armed robberies — and instead struck Elena Mondragon.

Five bullets and bullet fragments ripped through Mondragon's body. The pregnant 16-year-old girl was pronounced dead less than three hours later at a nearby hospital.

The fatal shooting of Mondragon by two Fremont cops occurred in Hayward on March 14 of last year, but in the following 11 months, authorities from multiple law enforcement agencies repeatedly declined to release information about the killing. "We never heard anything from anybody," Mondragon's uncle Miguel Minjares said in a recent interview. He complained about the secrecy of multiple law enforcement agencies and questioned why his family wasn't provided with information for almost a year.

Last week, the Alameda County District Attorney's Office finally completed its review of the police shooting, providing new details and concluding that Fremont Detective Joel Hernandez and Sgt. Jeremy Miskella were justified in fatally shooting Mondragon, because they were trying to stop 19-year-old Rico Tiger, the driver of the car, from killing their partner and slipping through the net they had cast to apprehend him.

In addition, prosecutors have decided to charge Tiger with murder, blaming him for Mondragon's death. He's also facing other felony charges; he was arrested in San Francisco the day after Mondragon died. In a letter to the Express, Fremont City Attorney Bronwen Lacey alleged that Tiger was a member of "a crew that is associated with a violent gang located in Oakland with ties to the city of Hayward called ENT and/or Money Team."

Court records and the DA's report describe the shooting as a chaotic scene in which the Fremont police officers' strategy to corner and trap Tiger didn't go according to plan. Instead, they scrambled to avoid being run over while other cops fired into the vehicle Tiger was driving.

The shooting had its origins in a series of armed robberies allegedly perpetrated by Tiger and several other accomplices over the prior year, according to court records.

Last February, Tiger, his friend 19-year-old Khyrie Copes, and others allegedly executed a spree of armed robberies across Santa Clara County and in Fremont and Union City. Police investigators described them as "violent, armed with firearms, and [having] employed police-like capture tactics."

One victim told police she parked in her home driveway one afternoon when a vehicle suddenly boxed her in. Two men exited. One leveled a pistol on her while the other said, "just give me your purse."

Another victim arrived at his house when three men ran up, one of them pointing a black handgun. A second man punched him in the face. They frisked his pockets and disappeared in a silver SUV.

The stick-up crew's undoing was a tracking system embedded in a stolen BMW sedan. On March 11 last year, Tiger, Copes, and another accomplice fled the scene of a Union City armed robbery in a stolen white BMW SUV. Police chased them into San Francisco where the three men bailed out of the vehicle and disappeared. The cops recovered a cellphone that had Tiger's information on it. Another phone allegedly belonging to Copes was found nearby. Police later figured out that the SUV had been stolen from the Manheim Auto Auction in Hayward.

Police learned that the thieves had been nabbing Manheim's vehicles as they were being staged for loading onto transport trucks. In addition to the silver SUV, there was a charcoal colored BMW 550X sedan stolen around the same time. Fremont Sgt. Eric Tang surmised that the sedan was taken by the same crew. After contacting BMW, Tang learned the vehicle came equipped with GPS tracking.

The dealership activated the GPS and began feeding coordinates to the Fremont detectives. On March 14, at around 3 p.m. the Southern Alameda County Major Crimes Task Force, which was leading the case, was sent information that the BMW was in Hayward. They assembled a team that included Fremont detectives Ghailan Chahouati and Joel Hernandez, along with officer James Taylor. The three rode in an unmarked Dodge minivan. Calling this the "heavy van," the trio would move in to arrest Tiger and Copes. Fremont police Sgt. Jeremy Miskella drove a small unmarked Honda Pilot SUV and also would assist in the arrest. Three other officers would carry out surveillance nearby in parked cars and on foot. With the exception of Taylor, who was handling a canine, all the arrest team officers were equipped with AR-15 rifles.

On March 14, 2017, they found the BMW tucked into the last parking spot on a dead-end street inside the City View Apartments near California State University East Bay in Hayward. Mondragon, Tiger, Copes, and Mondragon's cousin, Airieanna Cabrera, were swimming in the complex's pool. It was a warm March afternoon. They stayed poolside for about an hour while an undercover officer observed them. Mondragon, who was from Antioch, was a friend of Tiger's.

The arrest team's plan was to wait until Tiger, Copes, and the two girls returned from the pool and got into the BMW. From there, the police would conduct a maneuver much like that used by Tiger and Copes to rob people. They hoped to block the BMW in its parking spot with their own vehicles, and arrest the suspects at gunpoint.