It's time to talk about pedigreed restaurateurs that co-opt traditional eats — and how the food-media hype machine enables cultural erasure.

The small, unassuming building on the corner of Market and 42nd streets — a mostly residential, working-class stretch of North Oakland — is an unlikely location for one of the most highly anticipated dining establishments in the East Bay.

Years ago, the building was home to a hair salon, and more recently a restaurant serving high-end "New Baja"-style small plates. Now, Russell Moore and Allison Hopelain, the husband-and-wife owners of Camino and two of the more prominent restaurateurs in the East Bay, have taken over the space and plan to reinvent it as The Kebabery. Yes, it's a restaurant specializing in grilled-meats-on-a-stick, but prepared in the quintessential California style, with lots of organic vegetables and other locally sourced, seasonal ingredients.

This is great news for fans of Moore's wood-fire-driven California cuisine — and also for those who don't have the budget to dine at Camino on the regular. But it's also the latest example of a rather curious phenomenon in the food world: Seemingly overnight, and even though the restaurant is still months away from opening, The Kebabery might already be the most talked about kebab restaurant in the entire East Bay.

That's despite the fact that the region is home to a wealth of more traditional Middle Eastern restaurants: Kamdesh, with its deliciously savory rice; Aria Grill, with its assortment of excellent grilled meats; and both Oasis Food Market and its sister restaurant, Oasis Kitchen, with their spit-roasted shawarma and habit-forming garlicky red-pepper sauce.

All around the country, many of the most famous purveyors of global and immigrant cuisines — the so-called "ethnic" foods — are actually chefs without family ties to those particular cultures. As food writer Francis Lam documented in a 2012 New York Times article entitled "Cuisines Mastered as Acquired Tastes," many of these prominent "ethnic" restaurants are helmed by white fine-dining chefs, who later in their careers decide to dedicate themselves to a particular cuisine for which they've developed a passion.

Here in the East Bay, often it's chefs with Chez Panisse pedigrees who own and operate some of the most-heralded restaurants, from Japanese ramen spots to upscale Mexican eateries. And when food reporters write about these places, there's a tendency to talk about how the chefs have "elevated" the traditional versions of the cuisine, whether it be through farm-to-table sourcing or fine-dining cooking techniques.

"People are willing to pay more when the kitchen is full of straight white guys because they look like they should be paid more." click to tweet

No one is making a serious argument that chefs should only ever cook foods to which they have a direct ancestral connection. But why is it that these mostly white, "pedigreed" chefs attain such incredible fame and success when equally talented immigrant cooks might labor in obscurity for years? And what does it mean that food pundits are so quick to hail these chefs as authorities on their adopted cuisines?

We need to have a talk, then, about this matter of cooking other people's foods and whether it's possible for chefs to do so in a respectful manner. Otherwise, the restaurant industry will always be rigged in favor of what Preeti Mistry, the chef-owner of Temescal's Juhu Beach Club, calls the "Iggy Azaleas" of the ethnic-dining scene: overhyped, culturally appropriative restaurants whose stories dominate the blogosphere and prominent food magazines, even as their white owners and chefs wonder why everyone always has to make a big deal about race.

Moore, for his part, seems keenly aware of the tricky cultural terrain that he's navigating as he prepares to open The Kebabery. The chef, who is half-Korean — though he said that he looks mostly white, so many people don't realize that he's bi-racial — said he's sensitive to the typical narrative of a successful chef picking up a new cuisine and trying to improve on it. 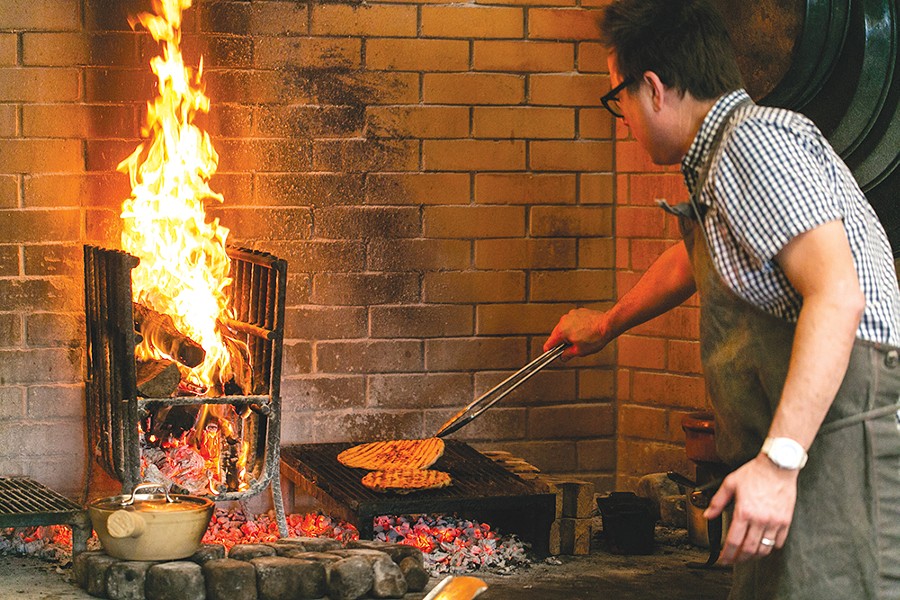 On the one hand, Moore feels good about the type of business he plans to run — one that will support small farmers, provide jobs for people who live in the neighborhood, and offer high wages and health insurance to everyone on staff. Although he hasn't set exact prices yet, he said he's committed to making the restaurant affordable enough that people who live in that part of North Oakland will actually be able to eat there regularly. And Moore stressed that, of all the things he hopes The Kebabery will be, a traditional kebab restaurant isn't one of them.

"This is going to be non-denominational," Moore said, explaining that he and Hopelain wouldn't have even put the word "kebab" in the name of the restaurant if there was an easier way to encapsulate the type of food they plan to cook — i.e., a small, rotating selection of grilled meats, served with flatbread and a variety of little salads. It was an affinity for that style of cooking and eating that drew Moore to making kebabs in the first place, more so than any particular transformational experience eating at some traditional kebab shop in Israel or Iran.

So, according to Moore, even though The Kebabery will prominently feature Middle Eastern flavors and spices when it opens later this year, the idea isn't to duplicate or improve upon someone's Persian grandmother's recipes. Lead chef Traci Matsumoto-Esteban is of Japanese descent and cooked mostly Asian food prior to working at Camino. Her carrot salad might taste just like something you'd find at a Moroccan or Tunisian restaurant, but the strictly non-traditional sauerkraut salad that might accompany another kebab plate certainly would not. And over the past few years, Moore has developed a flatbread recipe — inspired by the one at Oasis — that uses whole-wheat flour and a slow leavening process, so that in the end it resembles a Chad Robertson (of Tartine Bakery fame) bread as much as it does a traditional flatbread.