'This is the beginning of something.'

by Suhauna Hussain and Emma Courtright 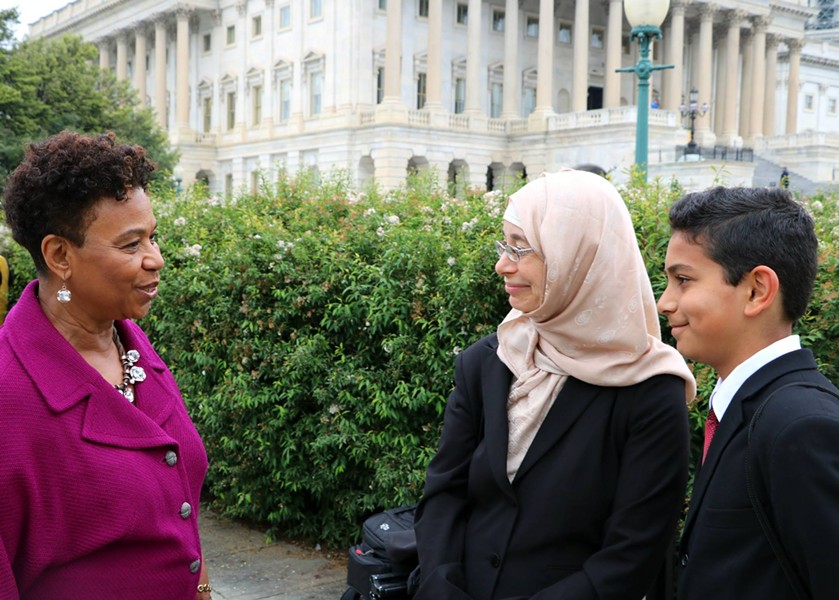 Rep. Barbara Lee’s been there before. She was the lone vote against the invasion of Afghanistan after 9/11. She served as the East Bay’s Congresswoman during the Iraq War, the PATRIOT Act, the Recession. She’s seen it all — or so she thought. Now, it’s the era of Donald Trump. That’s why the Express spoke to Lee this past Friday, which marked Trump’s first week as president. Here’s her perspective and observations:

On Congressional priorities
Big picture, we have to focus on not allowing him to erode our democracy and our democratic values. … People are fearful right now. [Trump’s] bullying our sanctuary cities, almost blackmailing our cities, in many ways, and that’s not who we are.

Her top priority
The number one focus is to resist much of what he has put forward. ... We’ve got to attack his agenda. It’s got to be a frontal assault, on all fronts. It can’t be just one priority right now. This administration is very, very intent on undermining our democracy.

The climate in D.C.
On the Hill, I think Democrats are united, in terms of what we stand for and what we must resist. I think Republicans are trying to go along with [Trump’s] program and his agenda. Shaking their heads, many of the moderate Republicans, they’re pretty quiet right now, but I think they’re like, ‘OK, we got to hunker down and support [Trump] even though we don’t agree with him.’ I don’t think all of the Republican caucus agrees with what [Trump] is doing, but they’re not saying that publicly.

On funding sanctuary cities
I have four cities that are sanctuary cities. Fortunately, my cities understand that they’re not going to allow this administration to bully them into saying they are going to cooperate and get rid of the sanctuary cities. I think a priority with regard to my district, and these four cities, is to stop them from trying to take away federal funds. That would be a disaster. We got to resist this, but also determine methods and strategies to keep them from moving forward on that.
We’re still trying to determine from the administration, quite frankly, what type of federal funds are they are talking about? Are they talking about everything? All grants, money? It’s too early to speculate on that. But bottom line is we’re going to fight back and not let them do this.

On Dem Party resistance
If this president puts forth a very right-wing Supreme Court justice, who will err on the side of eroding all of the human and civil rights and environmental protections that we fought for over the years, then I think that the leadership of the Senate must make a calculation and determine how they’re going to resist that. I saw each and every day how [President Barack Obama] tried to ask for input and cooperation [from Republicans] and they just said, “No, no, no.” That’s not the American way, but I do think, given the extreme agendas Trump has, that we have to find our own way to not allow it to happen.

On recent political activism
I’m really proud of my constituents, because many came to the Women’s March in Washington and many participated in the marches in my district in the Bay Area. I think my constituents really understand that free speech is extremely important, and educating the public about what is taking place and letting their voices be heard is very important. …

We have to get very political. We can’t sit out these next elections. There are four or five Republicans next time around in two years who really have a very tough district. … This is a political struggle, and people in my district and throughout the country need to get involved in races around the state and around the country, where we can change at least the House of Representatives and the Senate so that we can have that wall of protection and resistance in the House. So, registering people to vote, getting politically organized, marching, raising our voices, it’s essential for my district to engage in the next few years.

On lessons learned from the Civil Rights movement
I talked to a lot of people the day after the election who were totally demoralized, depressed and frustrated. And that was OK for a day or two. But as an African-American, and as a woman, I’ve been fighting all my life. And the people involved in civil-rights movements have been fighting all their lives. Many died, many spilled their blood for change and for equal justice under the law. So, while we may feel down and out for a day or two, we got to get up and fight back, that’s what the civil-rights movement has shown, and that’s what the struggle of African-Americans has shown. We’ve been through the middle passage, slavery, Jim Crow, legal segregation. We didn’t give up. We fought back. So, I am encouraging people not to give up though times may seem pretty gloomy.

On How Trump is different
After 9/11, I was the only one who voted against that blank check for the president’s war, and I think the difference for me personally is that I was under so many personal attacks, death threats — it was a terrible, terrible time. … We were in mourning for the loss of life, the tragedy that took place. We didn’t know how to respond. This time, I think we see more people understanding the nature of what is taking place, and the ramifications of it right away.
I think immediately after Donald Trump was elected, people got it. They get how his agenda is not a democratic agenda. This is the beginning of something we don’t even want to think about, in terms of the type of government he is trying to establish. People understand that, and they really do want to fight back. It’s settled in.