We asked Bay Area comedians where they like to go out for a night of laughs in the East Bay. 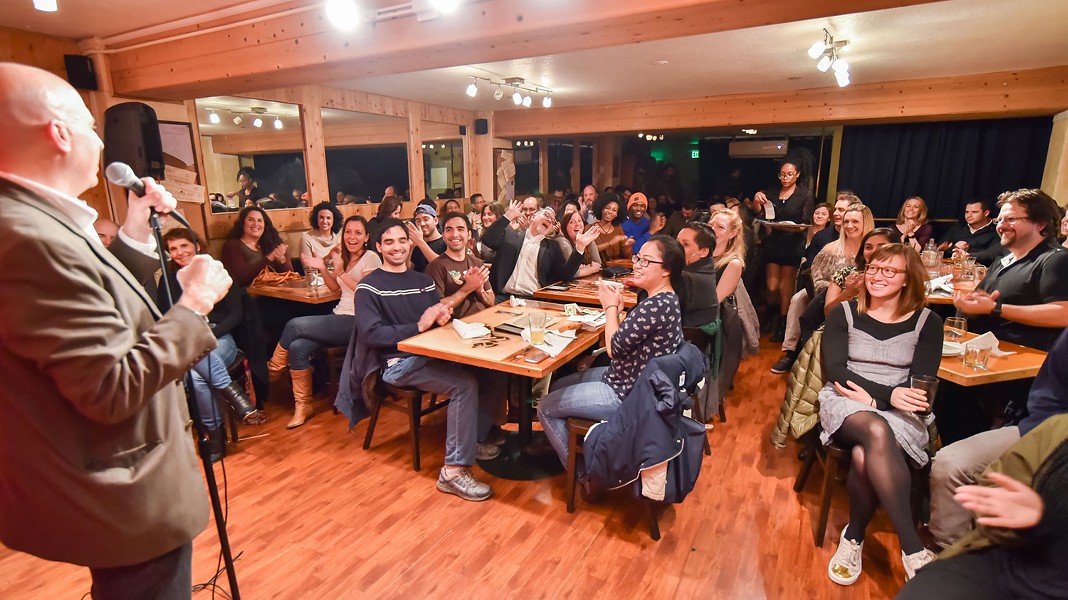 When you don’t want rage at a club, drop a lot of money, or passively watch a movie, local comedy nights start to sound like the ideal night out. They’re intellectually stimulating, but you don’t have to expel much effort. They’re fun — what’s more fun than laughing! — and often free. And when you do drop cash, it supports local businesses and entertainers. We should all hit the nearest comedy club right now.

But wait a minute. The East Bay actually has barely any comedy clubs. Instead, comedy fills restaurants, bars, cafes, and even game stores every week — it can take a while to figure out where to go and what’s what. Instead of pretending that we’ve been to every single comedy night in the East Bay, we asked some great local comedians about where they like to perform and watch their peers.

Ladies Love The Layover
Irene Tu hosts the ever-popular Man Haters show, so you can trust her recommendation to check out this monthly show at The Layover. Every show features exclusively female performers — although all are welcome in the audience — as hosted by Dominique Gelin. “There are quite a few shows at The Layover, including shows every Tuesday and some Saturdays, but this particular night is my favorite to watch,” Tu wrote via email. “The crowd is always electric and you can tell the comedians are really having fun onstage. A great night out with friends or even a date.” Find Ladies Love The Layover every second Tuesday night at 8 p.m., and there’s no cover.

Moonlight Comedy: Stand Up Under the Stars!
When Filipino-American comic Andrew Orolfo isn’t luring celebrities to Comedy x Pop Up, he likes stopping by Moonlight Comedy at The Uptown. “When it’s not super cold out, the show takes place outside on the back patio. Something about comedy by moonlight is pretty awesome,” he wrote. Hosted by Adam Pearlstein, Moonlight Comedy takes place every Wednesday at 7 p.m. Even better, it’s free.

Comedy Oakland
San Francisco-based comic David Nihill gets around. He’s the winner of 2018 San Francisco International Comedy Competition, founder of the FunnyBizz Conference, and the author of Do You Talk Funny? — and he’s a regular at Comedy Oakland, which isn’t exactly a venue and isn’t exactly a regular comedy night, either. It takes over the upstairs loft of The Spice Monkey Restaurant & Bar with five shows spread across Thursday, Friday, and Saturday nights. Nihill particularly recommends The (Not So) Late Show on Saturdays at 9:30 p.m. “The lineup is curated so you only see the best local and visiting comics and they are never on for too long. Comedians are always diverse (not just because of me being Irish and on there!), usually five to six per night and the food is great,” he wrote. “That’s when folks really come to really laugh and let their hair down, free from the working week.” Comedy Oakland, founded by Samson Koletkar, also hosts The (Not So) Late Show on Fridays at 9:45 p.m.; Comedy Oakland Presents on Thursdays at 8 p.m. and Fridays at 7:30 p.m.; and Comedy Machine, which pits comics against each other in a tournament, on Saturdays at 7 p.m. Tickets range from $15 to $20 per night, though you can also splurge on reserved tables.

Comedy x Pop Up Food
Michael Che and Hannibal Buress have dropped by Comedy x Pop Up Food unannounced, so the weekly show must be pretty great. Tu and Orolfo are behind this comedy night at Starline Social Club, and Gelin is a fan. “It’s got a really great vibe, so usually I’ll get there early to grab a bite of whichever food pop-up they’ve got that day and then head to the back for the show. You can bring your drinks to the back room, but I do like that it’s in a separate space from the bar so folks aren’t getting distracted by other people’s drink orders or anything. These two also do a good job of featuring a fun mix of local talent and out-of-towners passing through,” wrote Gelin. “You’ll love it.” It takes place Mondays at 8 p.m., with no cover for entry.

Critical Hit
Gelin also recommends checking out Critical Hit, a comedy show that takes over It’s Your Move Games on Saturday nights. “I’m not sure how these guys got a game store to host a weekly comedy show, but every Saturday, Erik Krasner, Hayden Greif-Neill, and Jim McVeigh pack it in and it’s great. It’s a BYOB show that’s been going strong for four years now. They also raffle off a bottle of wine and a gift card from the store, so... bonus,” Gelin wrote. The prime Temescal location doesn’t hurt, with great restaurants and beer destinations nearby to make it a full night out. It costs $5 to get into each 8:30 p.m. show.

Pizza Party
For Berkeley denizens and folks interested in checking out a newer show, Gelin points to Pizza Party Comedy, a weekly event at the Red Tomato Pizza House. “I’m not just recommending this show because I love pizza. I also love garlic bread. And hilarity, of course,” she wrote. “This is a great spot to go to if you want to get a sense of who’s coming up in the scene right now and prefer hanging around downtown Berkeley.” Hosted by Sureni Weerasekera, Pizza Party goes down every Saturday night at 7:30 p.m. It’s free and comes with discounts on pizza and pitchers.

Comedy Soup
Oakland’s main comedy club is All Out Comedy Theater, a community-oriented spot with shows and improv classes. Dalia Malek hosts the Interruption Show on first Fridays at the theater, where she interrupts stand-up comics mid-performance and digs for backstories. Ironically, she recommends comedians and fans go to some dude’s house instead. “Comedy Soup is produced by comedian Jonah Pollack in his living room at Sycamore House, but I promise it’s not creepy,” she wrote. “Jonah’s probably more afraid of you than you are of him. … The audience is led upstairs to the living room, which functions as the showroom. They’re free to go into the kitchen and grab popcorn, beer/wine, etc. There used to be soup, hence the name, but not anymore. The living room is comfortable and warm, with a properly functioning microphone, strangely perfect for a really engaging comedy show. The lineups are always diverse and funny, and it’s a relaxed place to try out stuff that’s more experimental.” The DIY show takes place on the first and fourth Fridays of the month, and it’s free with an RSVP to SoupComedyRSVP@gmail.com.  