Clearing Out the File Cabinets, But Not Necessarily the Air 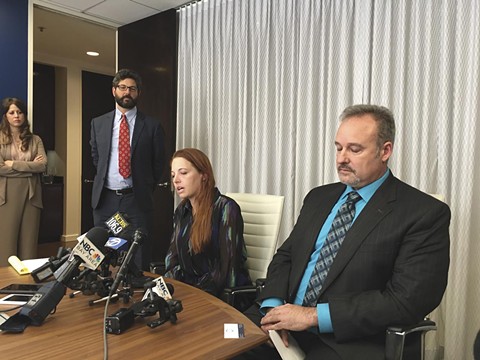 A veteran employee of the Bay Area Air Quality Management District has filed a lawsuit charging that the district destroyed important public records about air pollution, then fired him because he objected.

Through interviews and court documents, Michael Bachmann and coworker Sarah Steele describe an agency culture that accommodated large polluters, shredded records of emission violations, withheld such documents from the public, and violated a legal agreement to preserve its data. A spokesperson for the district declined to comment on the case.

Bachmann had worked for the air district for more than a dozen years when he was asked, in 2014, to take charge of a massive overhaul of the agency's records. The district was planning to move its headquarters and wanted to inventory, streamline, and digitize its files in preparation for the move.

To help with this task, Bachmann hired his longtime friend Steele, who had experience creating and managing records systems. While she organized paper and microfilm documents, he worked with photographic images stored on computers, creating a digital system to organize and digitize them so they would be searchable.

"My goal was to make sure everybody could see the history," Steele said. Air District planners need records of past experience to guide future decisions about controlling air pollution. In addition, the district is required by law to retain many types of documents as public records. Steele said part of her motivation for this work came from growing up in El Sobrante, unaware of how pollution from nearby refineries was harming the health of her community. "So few people are aware of the horrific pollution going on in our backyards." She said it's important for people to know the history of pollution on a particular piece of land — such as the site of the notorious Berkeley polluter, Pacific Steel Casting, which recently closed.

Bachmann is now restricted from discussing his suit by a recent court-imposed confidentiality rule, but he told his story in interviews before the rule was put into effect. His attorneys, Gary Gwilliam and Jayme Walker, provided additional details in the brief they filed in August 2017 in Contra Costa Superior Court against the district and six senior staff members. Steele, who also was fired in February 2016, was originally part of the lawsuit, but in June of this year she accepted a cash payment to settle her case. Steele and Bachmann, now a couple, were struggling financially after both losing their jobs, and Steele wanted to be free to talk about the case.

As Bachmann and Steele worked on organizing the records, they began noticing things that disturbed them. In the summer of 2015, she said, "giant dumpsters began to appear" in the office. When Steele looked in the dumpsters, she found, among other things, reports of refinery "flaring" incidents, notices of violations of air-pollution standards, and documents pertaining to current litigation — all records that she thought should be kept. In August, according to the lawyers' brief, an employee in the enforcement division also told Bachmann that documents related to litigation against Pacific Steel Casting were being improperly destroyed.

At around the same time, Steele was working on sending paper and microfilm records to a contractor to digitize. According to the lawyers' brief, one day air district Director of Enforcement Wayne Kino and attorneys Brian Bunger and Bill Guy "approached [Steele] in an aggressive manner and told her they wanted to destroy microfiche documents containing many records of violations of air quality." Steele thought that request was illegal and reported it to Bachmann.

In November, Bachmann told senior executives that records were being illegally destroyed and asked that they send documents to him first, rather than putting them straight into dumpsters. In an interview before the confidentiality order was imposed, Bachmann said Bunger overruled this request. He quoted the lawyer as saying, "If staff accidentally destroys these records, that's OK, because they can only hurt us in the long run."

Meanwhile, Steele said, boxes of paper and microfilm documents were being shipped to a storage facility in Richmond. But some records were withheld from these shipments, sometimes with explanations, sometimes not. She said the process seemed "haphazard." She continued to send records to be digitized, but senior officials told her not to digitize certain documents, including records in one huge, locked cabinet that Steele nicknamed the "magic cabinet."

Steele said Rochelle Reed, public records coordinator, stated in a deposition to the court that the cabinet had not been opened in more than ten years. After the cabinet was moved to Richmond, a staff member sawed off the lock. Inside, Steele found records of asbestos pollution, refinery flares, inspection reports, and settlements between the air district and companies that had been charged with violations. She expressed concern that these documents had not been made available for public records requests. Asked if she felt the district was withholding information from the public, Steele said, "Hell, yeah."

Another former air district employee, who asked not to be named, agreed that the district had mishandled public documents and destroyed many that should have been kept, but disagreed with Bachmann's and Steele's suspicions that this was being done intentionally to keep information from the public. The employee, who was familiar with the document-handling process, expressed the view that rather than "a conspiracy," the records mishandling was due to "laziness and ineptitude."

That person, however, also reported having the impression that senior air district officials were reluctant to clash with industrial polluters. If the district were to impose large fines for air-pollution violations, for example, "the refineries would fight tooth and nail — and they have the best lawyers." The former employee said district officials "want to work with industry, to be on their good side, [to have] a symbiotic relationship."

Steele believes this cozy relationship interferes with the public's right to know about air pollution issues.

In December 2015, Bachmann made another disturbing discovery. Over the summer he had downloaded all the photographic images of documents from agency computers. Since then, he had developed a software system for digitizing them to be searchable. But at the end of the year, when he went back to the computers to double check, he found that thousands of these images had disappeared. They included records of violations of air quality standards, complaints and actions taken, asbestos records, and communications between executives and industry. Gaps in numbering showed that documents were missing.

In January 2016, Bachmann reported this to air district senior staff. His supervisor, Eric Stevenson, said later in a court deposition that Bachmann had been "ruffling feathers" of executive management: "He wanted ... to be more in control of the documents system as opposed to ... allowing the divisions to maintain control of that," Stevenson said. Under further questioning he added that Bachmann wanted that control because "there was the potential that documents of records could be destroyed."

Air district employees soon received a flyer with their paychecks reminding them that the office move was imminent and encouraging them to "clear out unwanted/unneeded items." The flyer specified that "confidential documents" should go into shredder bins and other materials into recycling containers, with no direction about which records to retain. The flyer promised a pizza party to the division with the best-cleaned-out office.

The following month, Bachmann was summoned to a disciplinary meeting where he was told he was being suspended for a week without pay for violating the agency's vehicle-use policy. Officials said he used an air district car in his commute, a widespread practice specifically allowed in the vehicle-use policy, Bachmann said.

His absence gave agency officials an opportunity to second-guess his work. "When a government employee is suspended without pay," he noted, "the agency gets access to your computer." When Bachmann returned after a week, he found that his whole software system for digitizing records had been wiped from his computer — along with all the digitized documents. Fortunately, he said, he had stored all the information on a hard drive and backed it up in the cloud.

On the same day Bachmann was suspended, Steele was told she was being let go because the project was finished. Yet after Steele and Bachmann were gone, she said, the district hired a contractor to continue the work they had been doing.

Even before he returned from his suspension, Bachmann was suspended a second time, this time with pay. However, he maintained access to a security camera at the Richmond storage facility. He showed the Express pictures he said were stills taken by that camera in May 2016. The pictures showed records chief Reed directing a crew that was dumping boxes of stored records into bins, then wheeling them out to a truck labeled "Shred-It." This despite a 2001 agreement in San Francisco Superior Court in which the air district committed not to destroy any public documents without keeping a record of them.

Bachmann was finally fired in August 2017. At stake for him, as a career employee, was not only his salary but also his access to health care and other retirement benefits — although his retirement income is secure in the state employee pension fund. Reasons given for his firing were "misconduct," "insubordination," and "dishonesty." The air district claimed he had misrepresented his military service and education on his employment application, but Bachmann said he has documents verifying these records.

As a career employee, Bachmann was entitled to due process in a "Skelly hearing," named after a court case that established this right. According to law, the officer conducting the hearing is supposed to be impartial. But Steele pointed out that Bachmann's hearing was conducted by Jeff McKay, one of the district officials charged in the lawsuit with destroying records.

The lawsuit is moving slowly, but scheduled to go to trial in December. So far the court has taken depositions from eleven air district staff members. Last April, Walker said, it imposed a fine on the district for "abusing the discovery process and not producing documents that they should have produced."