Oakland officials, neighbors call the decades-old center a nuisance. Advocates worry customers will soon be the latest victims of gentrification. 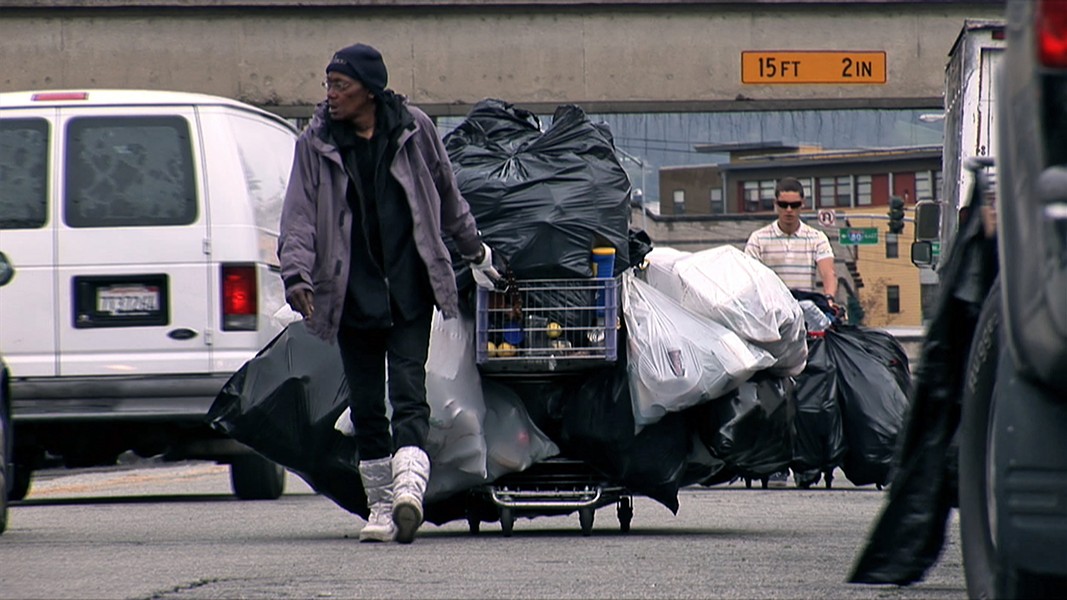 Ask David Larks what he does for a living, and the twenty-year Oakland resident says he recycles. He earns about $1,200 a month selling bottles and cans three to four times a week to Alliance Metals, the red brick building decorated with scrap-metal sculptures in West Oakland’s Dogtown neighborhood. An elderly Black man who used to lay tile professionally, Larks stood next to his bike in front of Alliance recently while his phone charged inside. “If this place closes,” Larks said, “I don’t know what I’ll do.”

Larks is one of roughly four hundred daily walk-up recyclers — many of them homeless or disabled — who rely on Alliance’s buyback service as a primary source of income. For them, it’s a rare gig in the formal economy that is without barriers to entry, requiring little more than a receptacle and an intrepid spirit.

And it’s all poised to disappear in less than a month.

After decades of pressure from the city, including dozens of citations in recent years, Alliance’s owners agreed that it will shut its doors for good on August 20, in lieu of incurring tens of thousands of dollars in fines for remaining open.

The city says that Alliance is a nuisance, with recyclers who officials say not only steal recyclable material from neighbors, but also use drugs and contribute to blight in West Oakland.

Alliance supporters say that the City Attorney and City Administrator offices are short-sighted and lacking in compassion. The city, critics suggest, is in thrall to incoming West Oakland developers keen on remaking the area.

The rub is that, in West Oakland, Alliance is the only recycling center that accepts walk-ups with shopping carts, according to office manager Victor Ortiz. And it’s also the only location where Food Not Bombs and church groups drop off bagged lunches. “Ain’t no other recycling place like this one,” said Richard, an East Oakland resident who recycles at Alliance six days a week. “It’s like a community.”

“If [recyclers] are not entitled to our trash, what are they entitled to?”—Amir Soltani, Oakland filmmaker tweet this
Some say the city’s aggression toward Alliance stems directly from the recycling center’s refusal to cease serving these walk-up customers with shopping carts, a policy that, if implemented, might run afoul of state recycling law that prohibits discrimination on the basis of transportation.

Alliance supporters have been galvanized by activist Amir Soltani’s 2015 documentary Dogtown Redemption, a sympathetic portrait of three recyclers — the Olympian of the trade, Jason Witt; the eloquent former minister Landon Goodwin; and onetime Polkacide drummer Hayok Kay, who’s ultimately beaten into a coma while sleeping on the streets — that depicts earlier controversies surrounding Alliance as proxy battles over the fate of Oakland.

“The city should reconsider its decision to shut down the recycling center,” said Soltani, who’s advocated for Alliance in articles published by Street Sheet, the East Bay’s newspaper that covers homeless issues, and directly to public officials since the release of Dogtown Redemption.

He said the city doesn’t view poor people as a legitimate constituency. “This is an exhausted, fragile community. To whom do they appeal?” he said, implying that electeds find it easy to ignore their struggles.

Similarly opposed to the closure of Alliance is the American Civil Liberties Union. In a letter addressed to the Oakland City Council on July 18, an ACLU representative wrote that “closing a facility that is relied upon by so many vulnerable community members — without providing any alternative resources — will only serve to increase homelessness, pan-handling, hunger, and desperation.”

Assistant City Administrator Claudia Cappio told the Express that she agrees “the folks who rely on the activity of selling cans and bottles back to a place like Alliance are vulnerable.” She also insisted that the city would help the recyclers transition after Alliance closes.

“I think it’s really important that we follow up in the next thirty days to make sure folks who rely on the money from that activity know there are a lot of social services to make life easier,” Cappio explained.

David Radoff, who works with Alliance as head of Recycle For Schools, thinks this is crucial. He has been leading rallies in support of the recycling center in front of City Hall, and he emphasized to the Express Alliance’s economic impact. For instance, the center doles out about $5 million to recyclers every year, according to its owners.

“The reason I’m organizing these protests,” Radoff said, “is because, though some folks like me have an alternative [source of income], a lot of the Alliance customers, they don’t.”

Lance Finkel and Joe Zidak bought Alliance from decades-long owner Jay Anast in 2011 with an understanding that the business was legally allowed to serve walk-up customers with shopping carts. However, the new owners’ attorney, Rena Rickles, said that conversations with representatives from the City Administrator’s Office in early 2015 made it clear that, so long as Alliance served walk-ups, there would be problems.

But welcoming walk-up customers, she noted, is the crux of the center’s business model. “The only way that [Alliance] could be ‘in compliance’ would be to cease its acceptance of material from walk-in customers,” Rickles explained.

The attorney described the city as indifferent to not only Alliance’s plight, were it to cut off walk-ups, but also to the loss of its customers’ livelihoods. “The city was deaf to the devastating impact that this loss of income would have on the recyclers, the majority of whom [have housing] only because of this income,” she said.

Rickles added that she informed city officials that discriminating against walk-up customers violates state law. The city’s position, she explained, was that even if the activity was specifically allowed and legal, walk-up customers with shopping carts could still be cited as nuisances for obstructing the right of way. Since it seemed to Rickles that the city wouldn’t tolerate shopping carts approaching Alliance via the sidewalk or street, she sarcastically said: “[Our] position was that the walk-in customers could not fly.”

“Essentially, they were blocking the sidewalk, blocking the streets,” responded Cappio when asked about Alliance customers. She admitted that this was a major sticking point during 2015 negotiations with Alliance, but that she was unaware if banning walk-up traffic violates state law.

Alliance received dozens of citations amounting to more than $17,000 in fines between April and June of last year for infractions including double-parking and an open gate with-out business being conducted, according to Rickles. The majority of the citations were for shopping carts obstructing the right of way, she said.

Alliance was prepared to go to a hearing last year to fight the citations —Rickles was confident most would be thrown out — but the owners decided to avoid paying the fines altogether by agreeing to close in a year.

Co-owner Finkel explained that the decision was made “under duress.” He said that recent talks with Council President Lynette Gibson-McElhaney, in whose district Alliance resides, were unproductive.

According to Finkel, the councilmember suggested that he direct customers to his other business, Lakeside Recycling in the Jack London District. In a statement, Gibson-McElhaney staffer Brigitte Cook wrote her office has assisted in the search for new Alliance locations.

Cook also explained that the councilmember is working with several nonprofit partners and the Department of Human Services “to identify other sustainable income strategies for the recycling clients.”

Contacted by email, a manager in Human Services wrote that they "do not have any information on Alliance closing.”

Finkel said he’s still hopeful the city council will intervene at the eleventh hour, at least to delay the closure until there’s some plan for the fallout. He also said that he’s proposed shutting down both Alliance and Lakeside a year from now if the city helps find another accessible location in West Oakland to consolidate operations.

Diverting Alliance’s walk-up customers to the relatively upscale Jack London District, as officials such as Gibson-McElhaney and Cappio suggest, is likely to only incite even more pushback from property owners, he added. Lakeside, for instance, is directly across the street from an in-coming seven-story, 90,000-square-foot market-rate apartment development.

“It comes down to the future of the underclass in America,” is how filmmaker Soltani summed up the struggle. “If [recyclers] are not entitled to our trash, what are they entitled to?”