San Leandro's All Saints Episcopal Church holds a roundtable discussion with its congregants to change the narrative around cannabis. 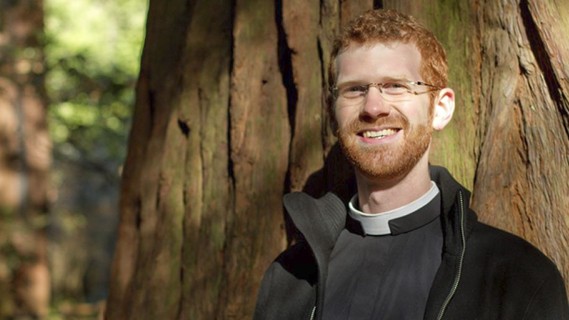 Thirty or so people gathered in the rec room of San Leandro's All Saints Episcopal Church on the warm, sunny afternoon of June 10. A stack of brochures, more than a dozen dropper bottles, and a few transdermal patch packages — all of them empty — sat on a long table in front. Playing on a large TV was a short video: The Racist Origins of Cannabis Prohibition.

"My intent in doing this roundtable was to address the long stigma around medical cannabis," All Saints Reverend Justin Cannon told congregants during his opening remarks. Titled "Every Plant Bearing Seed—Encounters with Medical Cannabis," the forum was organized as a way for church members to learn about the medicinal properties of cannabis. For the audience of mostly Baby Boomers, opening the program by acknowledging the racist, xenophobic roots of criminalization marked the first step toward a larger goal: changing the narrative.

"With cannabis being restored into use through laws, we need to de-stigmatize and address that stigma," Cannon explained to the group. "What better way of doing that than at a church, having that conversation through a spiritual lens and hearing from each other?"

A house of worship leading its parishioners in an open discussion about the medical benefits of weed might seem surprising, even odd, to an outsider. But the Episcopal Church passed a resolution expressing support for legalization just as the War on Drugs was getting started more than 35 years ago. The 1982 statement reads, "The Episcopal Church urges the adoption by Congress and all states of statutes providing that the use of marijuana be permitted when deemed medically appropriate by duly licensed medical practitioners," reflecting a progressive stance on the issue 14 years before California started the nation's first medical cannabis program, in 1996.

The title of the event, taken from the creation story in the Book of Genesis, was the first thread weaving religion and spirituality into the day's discussion. "'The land produced vegetation, plants bearing seed according to their kinds and trees bearing fruit with seed in it according to their kinds, and God saw that it was good,'" Cannon read aloud from the Bible. "So that's the starting point, that the plants that God created are good. It's when they're abused that people start to corrupt God's creation."

Over the course of an hour, four parishioners came up to the microphone one-by-one to share their personal experiences with medical cannabis. (The parishioners asked to only be identified by their first names.) Bronwen spoke of recently trying CBD cream to soothe the painful inflammation in her knees after her doctor recommended it as an alternative to glucosamine. "I'm not ready to say absolutely positively," she said of the results so far. "But it's looking good!"

Donna, the next parishioner to share, was more definitive. "I've suffered from an incredible amount of pain in the last ten years, and my experience with medical cannabis is that it's a miracle drug." After detailing the myriad health issues she's faced since 2010 — gastroesophageal reflux disease, spinal fluid leaks, an esophagectomy, brain surgery — Donna tried medical cannabis despite fears stemming from longstanding prohibition. "I'm such a rule follower, I don't do illegal things," she said. "But I will go on record saying that cannabis changed my life."

Mary sat on a chair in front of the group when it was her turn to speak, tucking her cane beside her. "My biggest thing has been neurologic pain — the searing, burning," she said. "It's like I have a blowtorch on my back and in my ears. Really messes with your quality of life." After years of vague diagnoses and a slew of prescription meds including Cymbalta, Lyrica, and methadone, Mary started taking cannabis to get relief from her recently diagnosed generalized and small fiber neuropathies, and for the migraines she's suffered from for years. "For me, it's not about sitting at home and thinking, 'I don't like my reality right now so think I'll have a different one,'" she explained. "It's about making my all-day, everyday reality better and bearable."

The program was rounded out by presentations from two Oakland dispensary representatives. "I loved when I looked at this group because I thought, 'Oh my God, it's my people!'" said Barbara Blaser, the director of clinical services at Magnolia Oakland. She had handouts: the list of known cannabinoids, the different ways to consume, the various diseases that benefit from cannabis, Magnolia's class calendar. Despite her daughter Debby Goldsberry's ownership of the dispensary and long history as a Bay Area cannabis advocate, Blaser didn't try cannabis until she fell into a coma and had to relearn how to walk after her own 2014 esophagectomy. "I was raised by Nancy Reagan, 'Just Say No to Drugs!'" she joked. "But when you're in a wheelchair for six months and in unbearable pain, you'll try almost anything."

During her presentation, Asha Manaktala, sales team lead for Harborside, briefly touched on how cannabis interacts with the endocannabinoid system. "Cannabis has very low negative impact because ultimately it works the same way that chemicals in your body work," she said. Manaktala referenced the tinctures and patches on the table, inviting the crowd to take a look and ask questions after the program. "It's important to know that you can use cannabis to achieve pain management and other balancing processes without a psychoactive effect," she explained. "So if that was holding you back, it shouldn't."

The final speaker of the day, Hillary, a psychotherapist who only wanted to be identified by her first name, addressed the ways cannabis helps psychological as well as physical issues. Her patients have taken medical cannabis for a number of ailments including anxiety, chronic ulcerative colitis, and sleep disorders without needing additional medications to counteract any side effects. "I've seen people who have managed to use this and maintain a level of comfort in their lives that they were not able to do with prescription drugs," Hillary said. "It is a natural substance, and I truly believe that we are given these things for a higher purpose."

The roundtable marked the beginning of a long educational journey — a journey that, as Cannon reminded his congregation, doesn't conflict with their faith. "God said, 'I give you every seed bearing plant on the face of the whole earth, and every tree that has fruit with seed in it. They will be yours for food,'" he said, quoting the Bible. "The plants of the earth are gifts to us from God, intended for our wellness."