Movie idols such as Ruan Lingyu and Bai Yang star at this special retrospective. 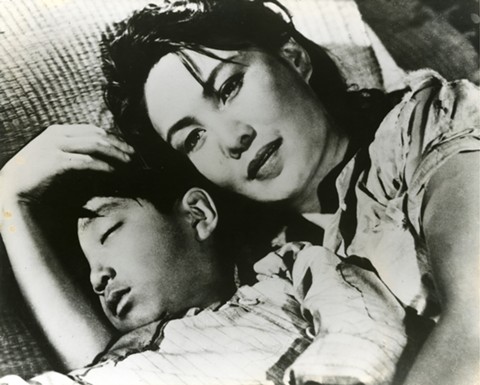 Ever since the dawn of the moving image more than a century ago, movies and movie stars have been a leading driver of content for communications media — internet, print, TV, advertising, newsreels, etc. As in: How is Bradley Cooper’s new one? What’s Saoirse Ronan up to these days? But we’ve almost never seen a serious, museum-level film retrospective inspired by a study of fan magazines. Until now.

If we had to pick the most representative of the retrospective’s five titles, it would be Crossroads (Shizi jietou), a 1937 romantic comedy directed by Shen Xiling and starring screen goddess Bai opposite the ridiculously handsome actor Zhao Dan. The story was old-fashioned even then. A newspaper proofreader (Zhao) shares a space in a rooming house with a textile mill training assistant (Bai), with only a thin partition between them. The gag is that they don’t know each other, even when they run into their unknown neighbor on the tram to work.

Crossroads benefits from more careful pacing and a sweeter mood than many similar Hollywood pics from the same time period — led by Bai’s performance as “a guileless, good girl.” On-location street scenes of Depression-era Shanghai, complete with ragamuffins in quilted coats, provide a real-world setting, alongside the sensuous camera work devoted to Bai. It shows one time only, Sunday, Oct. 14.

The three-hour World War II epic melodrama The Spring River Flows East (1947) is something else entirely. As Japanese troops invade Shanghai, a cowardly factory worker named Zhang (Jin Tao) takes advantage of wartime duty to abandon his wife Sufen (Bai) and their baby son. Fleeing to the interior city of Chongqing, he moves in with a spoiled rich woman (Shu Xiuwen) and lives a soft life far from the conflict. In a blizzard of cross-cutting, co-directors Cai Chusheng and Zheng Junli contrast Zhang’s indolent life among the property-owning class with the sufferings of Sufen and her working-class family under the cruel invaders. Bai gets the best lighting — that’s one way of evening the score. Newsreel war footage adds realistic urgency to the already heart-rending proceedings. The Spring River Flows East (Yijang chunshui xiang dong liu) screens Thursday, Oct. 11.

The retrospective opens with a pair of early showcases for beautiful leading lady Ruan Lingyu. In the 1934 silent The Goddess (Shennü), Ruan plays a Shanghai prostitute who tucks in her baby son every night, then goes out on the streets. This fretful existence is complicated by the presence of the Boss (Zhang Zhizhi, the Chinese Ernest Borgnine), a corpulent pimp who helps himself to the Goddess’ food as well as her life savings. Tender scenes of maternal devotion alternate with gritty soundstage social realism under the direction of Wu Yonggang. The Goddess plays Friday, Oct. 5.

Director Wu remade the same story as a talkie with the same main
actors four years later, and called it Rouge Tears (Yanzhi lei). If Ruan reminded us of Barbara Stanwyck in the earlier version, in The Goddess she’s more like Anna Magnani, in a leisurely paced, fleshed-out scenario. Compared to this weepy soap, the 1934 version is an austere tone poem. Rouge Tears shows Sunday, Oct. 7.

A group of rare Chinese fan-magazine covers from the Paul Kendel Fonoroff Collection will be on view at BAMPFA through Oct. 14. For further info and updates, visit BAMPFA.org