Caviar, Newly Launched in the East Bay, Delivers Food from Some of Our Favorite Sit-Down Restaurants

Perhaps you, like me, have occasionally had a hankering for a rice bowl from Hawker Fare or a margherita pizza from A16, but felt too lazy to leave your house — to deal with parking, or waiting on line for a table during the peak dinner rush, or any of the other hassles that go hand-in-hand with a formal restaurant dining experience.

If so, Caviar, a delivery service for sit-down restaurants, most of whom don’t normally deliver, might be the solution you’ve been waiting for. Founded by four UC Berkeley alums, the company launched in San Francisco two years ago, and has slowly rolling out its service to other major cities. Caviar just launched service in the East Bay yesterday, with a preliminary lineup of fifteen restaurants that includes some of the most popular and most beloved spots in Oakland and Berkeley: Hopscotch, Phil’s Sliders, Plum Bar, the aforementioned Hawker Fare and A16, and many more. 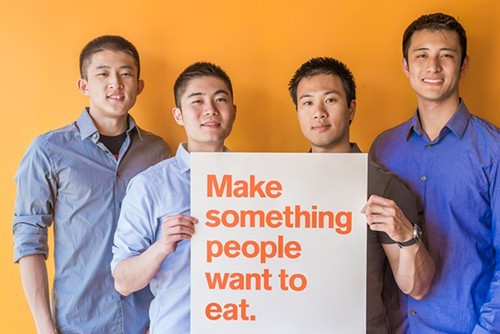 Here’s how it works: Customers place an order from the restaurant of their choice, either “on demand” (for delivery within the hour) or scheduled up to a week in advance. Once the order is placed, Caviar dispatches a driver (via a smartphone app) and notifies the restaurant. Delivery is guaranteed within the hour, and GPS technology allows you to track the exact location of your food — kept warm in a heat thermal bag — while it’s in transit.

How much does this kind of Jetsons-esque service cost? For customers, there’s a $9.99 flat fee (split between however many people are placing the order) plus an automatic 18% gratuity, both of which go directly to the driver. Meanwhile, the company its makes money by taking a cut from the restaurant — usually between 20% to 25% of the sale, depending on the type of restaurant it is, co-founder Jason Wang explained.

Other notable features: Caviar’s website (a smartphone app version is currently in development) features a photograph of every single dish; there is no minimum (or maximum) order; and the delivery zone, which covers most of Oakland, Berkeley, and Emeryville, is notably large — there are restaurants on the list I’d never normally considering getting takeout from because they’re just too far away.

Caviar recently took some heat from the tech-culture blog Valleywag, which criticized the company for not being up front about the fact that it’s really just offering a luxury service for people who are as lazy as they are wealthy — “Seamless for rich people,” as the author put it. But Wang said the idea that Caviar is mostly delivering food from expensive white-tablecloth restaurants is a misconception, pointing to the diversity of the restaurants represented on the East Bay list. And it’s true: Higher-end restaurants like Hopscotch and A16 are outnumbered by places like Shan Dong, an Oakland Chinatown standby where nearly every dish costs less than $10.

According to Wang, quality is important to Caviar. He said the company only plans on partnering with what its founders consider to be “top” restaurants, not your typical mediocre Chinese takeout joints or greasy slice shops. But in most cases, what that translates to is low- to mid-range neighborhood spots that happen to be extremely popular.

Wang said Caviar plans to add at least one new restaurant a week. The next two on the list are the ever popular Ike’s Lair and Homeroom. As an opening promotion, from now until May 25, the company will waive the $9.99 delivery fee for East Bay orders.