Cashing in on Education

California’s school bond system is dominated by well-funded private interests and plagued by a lack of oversight. 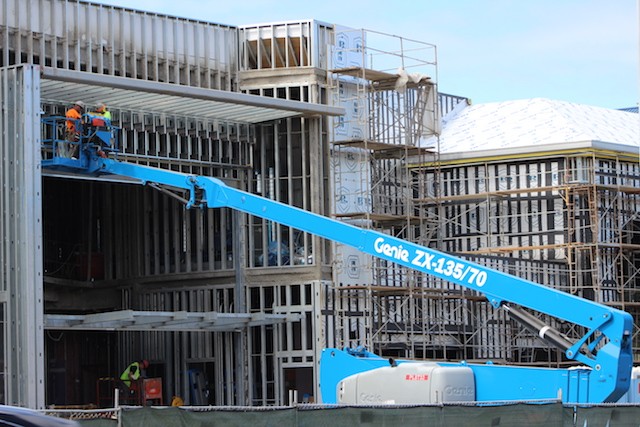 At Anton Jungherr’s home in Hercules, two dachshunds bark bloody murder from the other side of the door. Even as Jungherr opens it with a welcoming greeting and smile, the two four-legged sausages, Nathan and Olive, continue to yelp as they circle around the cuffs of his khaki pants.

At 85, the silver-haired Jungherr, his cheeks hanging comfortably over his square jaw, knows much more about school bonds than most Californians.

The West Contra Costa Unified School District is home to nearly 32,000 students from Richmond, El Cerrito, San Pablo, and nearby cities, including Hercules, and Jungherr has served on its citizen bond oversight committee since 2004. He also co-founded the California League of Bond Oversight Committees, a nonpartisan group that promotes school district accountability.

Jungherr contends that, over the years, school districts like West Contra Costa have been using local bond money to build “nice-to-have” rather than “need-to-have” facilities, and have been watched over committees that have received little training and whose members are too cozy with school district officials. He says that without incentives or mandates to change, school districts will continue to spend their money on whatever they want with little recourse.

“Each community is basically going to get, just like any other issue in a democracy, whatever the citizens are going to tolerate,” said Jungherr, who, in sharing his opinions, says he’s merely a Contra Costa County resident advocating for greater oversight over taxpayer dollars. “If people want to have terrazzo floors, which was one of our high schools — they had terrazzo floors — and $21 million football stadiums with bond issues, and the people go along and pay for it, that’s what you get.”

In the last two decades, voters in the West Contra Costa Unified School District have approved more than $1.6 billion in school bonds. That money, like the nearly $200 billion in school bonds passed all over California during that same period, isn’t meant for hiring more teachers or increasing their salaries or relieving them from the obligation of buying supplies for their classrooms. It doesn’t fund mental health services, after-school programs, or free lunches for hungry kids.

It’s meant for brick-and-mortar improvements like updating heating and cooling systems and building a school from the ground up. And West Contra Costa has done that, taking its once dilapidated schools and turning many of them into state-of-the-art educational facilities.
But was the money to improve the district’s schools used as wisely and prudently as possible? There had been allegations of waste and fraud, and community members tasked with keeping tabs on the bond funds say the district hasn’t followed oversight requirements mandated by state law.

One Contra Costa County grand jury investigation pointed to numerous problems with the school district’s bond oversight committees, including delays and inadequate and inaccurate documentation provided by the district and committee members with conflicts of interest with the school board — all violations of state education codes. A school district whistleblower had even alleged there was “fraud, corruption, and waste” in the bond program, according to district documents.

The district Citizens’ Bond Oversight Committee’s annual report released in August 2017 — which included an outside forensic audit of the district’s books — found while the district was making some improvements, it’s spending practices still had some areas of concern.
Overall, while oversight was lacking in West Contra Costa, property owners were paying nearly 300 percent of the state average on their property tax bills, school construction costs were three times the state average, and nearly $300 million of the bond went to program management and architects’ fees, not construction costs.

Jungherr has pushed for greater school bond oversight across the state, noting that the lack of accountability isn’t exclusive to West Contra Costa. While school districts are required by law to have independent oversight of their multimillion-dollar school bonds, too often, they’re staffed by untrained people who are “appointed by the school district to be quiet,” Jungherr argued.

While many cases of questionable school bond spending go under the radar, some financing scandals in California have attracted the attention of the U.S. Department of Justice, the Securities and Exchange Commission, and even the FBI. In some cases, entire school boards were charged, superintendents jailed, and others indicted for illegal practices. Those cases, however, are rare.

There was, however, legislation in Sacramento — AB 1253, by Ken Cooley, D-Rancho Cordova — to give more teeth to local watchdogs commissions, but the 2017 bill was opposed by well-funded lobbying groups who continue to push for more school bonds while actively objecting to measures that would keep tabs on how that money is spent.

“It was all of the lobbying groups who were against it because they don’t want to provide any additional resources to the oversight committee to do their jobs,” Jungherr said. “It’s not in their interest to give them any tools or help them to be more assertive, to be more aggressive, and provide independent oversight.”