California's cap-and-trade system, which has been touted as a model for reducing greenhouse gas emissions worldwide, allows timber companies to clear-cut forests.

Jerry Brown basked in adulation during his whirlwind trip to Paris, and the evening of December 8 figured to offer more of the same. Standing alongside governors of states and provinces from Brazil, Mexico, and Peru, California's governor planned to tout his state's leadership role on global climate policy. The event was one of 21 presentations that Brown delivered during a five-day swing through France during the United Nations Framework Convention on Climate Change (COP 21). His busy schedule included a stately private meeting with UN Secretary General Ban Ki Moon and presentations at events organized by the French, German, Chinese, and US governments.

The December 8 event was held at a mid-19th-century-mansion-turned-hotel and was hosted by the Governors' Climate and Forests Task Force, which is a collaboration of 29 states and provinces in forest-rich countries that are preparing to join a program called Reducing Emissions from Deforestation and Forest Degradation (REDD). Crucially, though, it was Brown's only Paris presentation to which non-invited members of the public could purchase tickets.

As Brown concluded his remarks, Pennie Opal Plant, an East Bay resident and member of the group Idle No More Solidarity San Francisco Bay, stood up near the front of the room, directly in front of the governor. "Richmond, California says 'no' to REDD!" she shouted, '"no' to evicting indigenous people from their forests, and 'no' to poisoning my community!"

About thirty people, who had dispersed themselves throughout the room to avoid prior suspicion of coordinated dissent, soon joined in a chant of "No REDD! No REDD!"

Organizers quickly escorted the flustered Brown to a nearby exit. Before disappearing, the governor claimed to agree with the protesters, witnesses said. 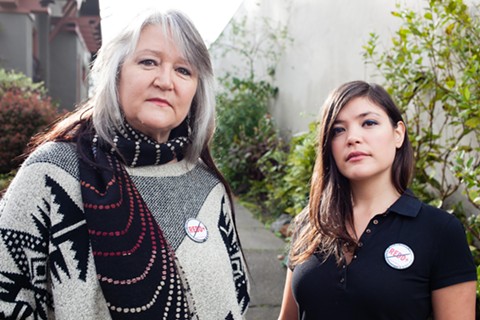 Brown and California are widely regarded as global leaders in the fight against climate change in large part because of the state's cap-and-trade program, which was authorized by the 2006 California Global Warming Solutions Act (Assembly Bill 32). The law caps the total amount of carbon emissions in the state and is designed to reduce emissions by allowing polluters to buy "credits" or "offsets" from carbon-saving projects or to sell credits themselves if they've significantly reduced their own emissions. California's largest polluters — including power plants and refineries, like the Chevron refinery in Richmond — can also invest in carbon-saving projects elsewhere in the United States, or in Québec, on a commodity exchange market. The oil giant Shell, for example, is using forests in Michigan to offset its carbon dioxide (CO2) emissions from its refinery in Martinez.

California's cap-and-trade program is the first of its kind in the nation. And the state's leaders are pushing to become the only jurisdiction in the world that also offsets its climate pollution through investments in tropical forest regions in the Southern Hemisphere. The common name for such efforts is REDD. Several industrialized countries, as well as the World Bank and the United Nations, have already invested money in REDD pilot projects.

Proponents say that REDD is urgently needed to prevent the degradation and loss of forests, a problem that accounts for roughly 20 percent of greenhouse gas emissions worldwide — more than the entire global transportation sector and second only to the energy sector.

But critics warn that California's adoption of REDD would have far-reaching human rights and environmental consequences. Initial investments by the World Bank and United Nations in REDD have already precipitated violent evictions of indigenous people from their forested homelands in the Democratic Republic of the Congo and Kenya — to make way for carbon-saving projects. In fact, countless activists and grassroots organizations regard REDD as a recipe for a global land grab, prompting them to dub it a case of "CO2lonialism."

Given California's trailblazing status with regard to climate policy, its adoption of REDD would likely trigger similar policies throughout the globe. "People all over the world are terrified that California will open the floodgates on REDD," said Ayse Gürsöz, an Oakland resident who was among those who joined in chanting "No REDD!" at Governor Brown in Paris last month. A video producer and volunteer for the Indigenous Environmental Network, Gürsöz has gathered video testimonies in Africa and Peru from indigenous people who oppose California's program.

Yet despite the opposition, California appears poised to adopt REDD. And Brown might do so at a time when many environmentalists have increasingly challenged the climate benefits of the state's own cap-and-trade program. They note that California's cap-and-trade system allows large lumber companies to generate and sell carbon credits when they engage in standard logging practices and clear-cut forests. As a result, cap-and-trade in California is proving to be a financial boon for timber corporations that practice many of the same forms of destructive logging that occur in tropical regions of the Global South.

The world's forests are in deep trouble. Since 1970, the year of the first Earth Day celebration in the United States, more than 1 billion acres of tropical forest have vanished: They've been cut or burned, or have died from insects and disease. The amount of forest lost equals an area about half the size of the continental United States. The environmental group Rainforest Action Network estimates that 2.5 acres of forest are cut worldwide every second — equivalent to two and a half football fields — which translates to about 215,000 acres every day, an area larger than New York City.

In the past several years, though, conservation of these forests has gained a fresh impetus as many scientists have begun to view them through a new lens: as global sponges that soak up heat-trapping carbon dioxide molecules emitted from burning coal, oil, and natural gas. Ecologists have started to measure the ability of every major forest in the world to absorb CO2, a process known as sequestration.