Can Transit Improvements Lead to Gentrification?

Transit-oriented development has become a key tactic to combat the region's housing crisis, but the challenge is to make sure it helps the people who need it most. 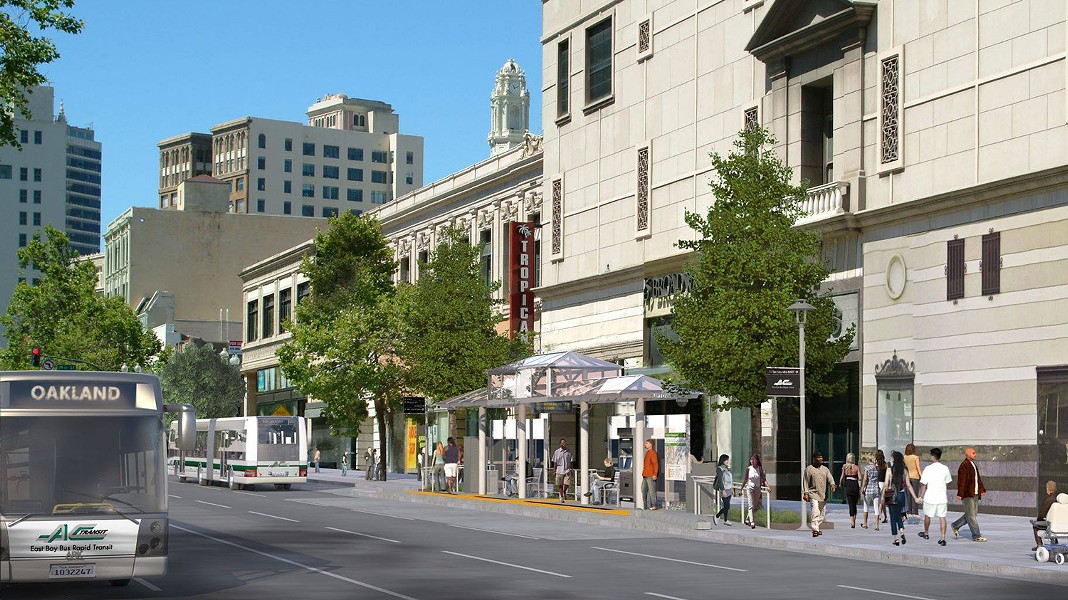 Conversation stops as the BART train goes by; it's too loud to hear anything over it. The noise only lasts about 20 seconds but it repeats frequently, about every five minutes. It's the same in any West Oakland backyard within a few blocks of 7th Street. Friends and family gather outside, fire up the grill, but every five minutes stare awkwardly at each other waiting to continue talking.

Downtown, the trains run underground, but rise again past Lake Merritt in the east and before MacArthur in the north. The tracks past MacArthur are at the height of second-story windows along Martin Luther King Jr. Way. At the border sculpture marking Berkeley as "HERE" and Oakland as "THERE," the tracks dip underground again.

It's cheaper to build elevated tracks. But as BART construction was planned in the 1960s, then-Berkeley Mayor Wallace Johnson recognized that elevated tracks would disrupt businesses and divide the city's neighborhoods. Berkeley fought to build the tracks underground, eventually passing a new city tax to make up the difference in cost to do so.

Oakland's elevated tracks were constructed as planned, and there, Johnson's worries about their impact proved correct. BART was one of multiple public works projects that disrupted the bustling — and mostly Black — business district along 7th Street. Known as "the Harlem of the West," it was once a hub for jazz and blues performances, attracting such artists as B.B. King, Etta James, and Billie Holliday.

When it opened, the West Oakland station's surface parking lot was mainly useful for people driving to the station from outside the neighborhood. Residents have complained about the noise ever since.

Decades later, the neighborhood continues to struggle with a lack of retail businesses, including a full-service grocery store, as well as pollution issues from freeways and the Port of Oakland. Yet because of its proximity to San Francisco and stock of attractive Victorian homes, West Oakland has recently seen its housing prices soar.

The demand for more housing creates an opportunity for BART, which owns an abundance of undeveloped transit-accessible land in its parking lots. Since the 1990s, BART has slowly changed its philosophy about how best to use the land around its stations, and sought to replace parking with housing, office, and retail developments.

The challenge is to develop transit improvements in a way that helps the people who most need public transit while preventing disruption to the neighborhood. Research has shown that improvement to transit and transit-oriented development can make neighborhoods more desirable and lead to gentrification, but it doesn't have to.

In the Bay Area, transit development has been more likely to lead to gentrification in core urban areas like Oakland and San Francisco rather than in more peripheral locations like Concord or Antioch, said Karen Chapple, a professor of city and regional planning at UC Berkeley.

Chapple, along with other researchers from Berkeley and UCLA, authored a 400-page report studying the effects of transit improvements on gentrification for the California Air Resources Board last year. She will also publish a book based on the findings next year, titled Transit-Oriented Displacement or Community Dividends? Understanding the Effects of Smarter Growth on Communities.

"The impacts are really mixed and so it depends on where you are in the region and what the specifics are in the neighborhood context," Chapple said.

There are several policies that Chapple said can help prevent displacement around transit centers: housing should be dense, but with an affordable component, and with strong protections for renters. It's also important to preserve affordable housing and prevent its sale to new owners seeking to raise prices as rent-controlled tenants move out. This can be accomplished by either the government or an affordable housing nonprofit stepping in to buy the building, she said.

Increased density near transit has been the goal of high-profile efforts this year. Two controversial state bills this year have targeted zoning regulations near transit: state Sen. Scott Wiener's SB 827, which would have set statewide height minimums for zoning near transit, and AB 2923, which would give BART zoning control over its own land, overriding local regulations and allowing denser development. Wiener's bill died in committee in April but AB 2923 passed and was sent to Gov. Jerry Brown to sign on Sept. 6.

If Brown signs the bill into law, it could lead to denser developments than might otherwise have been approved at some BART stations as well as a faster timetable for development, though it could take years to fully go into effect.

But more density doesn't necessarily mean more housing. For example, a plan for the West Oakland station proposed by a development group negotiating with BART would replace the surface parking with 1.1 million square feet of office space — enough for about 7,600 workers — and could be BART's future headquarters. It would add only 180 units of housing and a 75,800-square-foot retail plaza.

On the other hand, an Oakland neighborhood that appears to have had some success in effective transit-oriented development without displacement is Fruitvale. In the 1990s, BART had planned to build a new parking garage at its station there, but after the community pushed back on the plan, BART instead built one of its first business and housing developments, with a strong affordable housing component.

A study released earlier this year by the UCLA Latino Policy & Politics Initiative found that while the economic well-being of the residents there improved from 2000 to 2015, the racial demographics of the neighborhood was almost unchanged.

It's important to avoid displacement in transit-oriented development because an influx of more affluent residents could lead to a reduction in overall public transit use. While people with higher incomes might use public transit more if they live near a station or stop, they overall don't use it as much as people with lower incomes.

"If we're going to spend public dollars subsidizing housing, then we've got to make sure we're putting the heavy transit users into those apartments," Chapple said. "People are just going to live near BART, hog all that space, and then jump in the car anyway."

BART's ridership surveys indicate that 25 percent of its riders have household incomes of less than $30,000 a year, but only 20 percent of households in the region have the same income level. Meanwhile, 40 percent of Bay Area households have incomes over $100,000, but only 32 percent of BART riders make that much.

For buses, this discrepancy is far greater: a 2012 survey of weekday AC Transit riders found that 63 percent had household incomes under $35,000.

But fears of rising housing costs have become so pronounced that even improvements to bus service worry some residents. AC Transit is working on a Bus Rapid Transit (BRT) project from downtown Oakland to San Leandro via International Boulevard. The roughly $178 million project will make two lanes of International into dedicated bus lanes. It will also build raised platform stations to speed boarding, particularly for people with disabilities

While many residents are eager for the development, some fear it will lead to displacement along the corridor. There does appear to be some evidence that BRT can lead to gentrification: A study by the UCLA Institute of Transportation Studies found that Los Angeles' Orange Line may have exacerbated gentrification.

Just like in the 1960s, the people of Berkeley balked at the transit plan. AC Transit's BRT project was originally intended to continue up Telegraph Avenue into Berkeley, but an organized group of Berkeley merchants objected, scuttling that section.

Berkeley's doubts had little to do with gentrification, however. In fact, the city protected the preferred mode of more affluent travelers: cars. City leaders and merchants feared the bus-only lanes would lead to traffic congestion and objected to the elimination of parking spaces. 