As Oakland's soon-to-be last pro sports team, the A's are trying to land on the right side of the city's housing battles, as they aim to build a new ballpark. 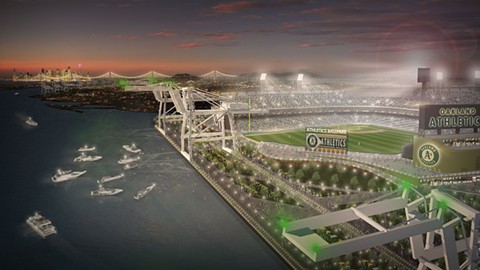 An A's fan on Twitter recently complained to team president Dave Kaval about vendors on the BART ramp next to the Coliseum, saying the street merchants hawking everything from T-shirts to bacon-wrapped hot dogs should be removed because they block pedestrians.

What followed next was vintage old-school Oakland, and perhaps a template for how the franchise can build a new ballpark in The Town while landing on the right side of the gentrification battle.

Hundreds of A's fans disagreed with the request, taking to Twitter to ask Kaval to leave the vendors alone. The consensus on social media was that the tweeting fan likely visits the Coliseum infrequently because a) the merchants do not crowd the ramp, b) they've been there for decades and are part of the Oakland baseball experience and, c) in an increasingly homogenous sporting landscape, the walkway vendors should be protected because they're part of Oakland sports' unique flavor.

Those merchants are living examples of Oakland hustle, some commenters said, calling them an offshoot of the city's celebrated blue-collar ethos. In short, hard-working strivers should be protected, especially if they're not bothering anyone while hustling to survive. Rise and grind — it's the Oakland way.

Kaval quickly jumped back on Twitter, promising the rising number of commenting A's fans that the vendors will be left alone as the team seeks to improve the BART ramp experience.

Even as the issue quieted, some compared the complaining fan to BBQ Becky, the woman who symbolized Oakland gentrification when she called the police a few months ago in a failed and somewhat preposterous attempt to stop African American men from barbecuing at Lake Merritt.

The BART ramp debate lacked the glaring racism that fueled the BBQ Becky case. But both scenarios shared the fact that longtime Oaklanders spoke up together to stop a newcomer who sought not to fit in with the city's culture but to change it to fit their narrow comfort zone.

That's unacceptable to the longtime Oaklander. And repelling such arrogance lies at the heart of The Town's anti-gentrification battle, which has tried to protect people of color from being harassed while doing mundane activities, as well as stem the alarming rates of displacement of low-income residents.

If the ramp debate was a test of how to respond to the forces of gentrification, Kaval and the A's passed it pretty well. They listened to the Oakland community before making a decision that reflected the city's values and showed compassion toward those financially vulnerable residents who'd be most affected.

If the A's tread as deftly while building their new Oakland ballpark, they'll do just fine — for the city and the franchise.

The A's have searched for a new home for nearly 25 years. That, unfortunately, has placed their anxious fans in a never-ending limbo in which they've had to worry almost daily about losing the team to another city. The concern is justified, as the NBA's Warriors plan to be in San Francisco next fall, and the NFL's Raiders say they'll move to Las Vegas in 2020.

To end local fans' torment and stabilize the team's future, Kaval and the A's are seeking to build a privately financed ballpark in Oakland.

Sounds simple enough. But the A's' ballpark saga has been far from simple.

That story took another twist last year when the team's first choice for a stadium site — on Peralta Community College District land — was rejected by the district board, which cited concerns from faculty and students that the ballpark might hurt nearby Laney College, gentrify the neighborhood, and displace its residents.

So, the A's have set their focus on two possible Oakland sites: The Coliseum in East Oakland and Howard Terminal, along the waterfront.

The Coliseum complex doesn't present the same challenges as Peralta because it's been used for pro sports and concerts for more than half a century. Howard Terminal, meanwhile, sits next to port cranes, warehouses, and other industrial uses, and neighboring Jack London Square is an entertainment district that doesn't clash with the impacts of a ballpark.

Still, obstacles to the ballpark search remain. For one, the team's previous owners, Steve Schott and Lew Wolff, spent 20 years badmouthing the Coliseum — and sometimes the fans — as they tried moving the A's to the South Bay. Their relentless negativity shrank the fan base and destroyed the community's trust in ownership.

"When I first got here five years ago, we didn't have strong connections with the A's, which disappointed me because we're just 30 blocks from each other," Iglesias said. "But when Dave got in, they really engaged with us."

When Kaval replaced Wolff as the business face of the franchise, the A's committed to keeping the franchise in The Town. They've made "Rooted in Oakland" their main slogan, while backing up that talk with countless charity gifts and community events. The latest example occurred on Sept. 13, when the A's partnered with former Oakland prep star and NBA Hall of Famer Gary Payton to donate $5,000 to the basketball team of his alma mater, Oakland's Skyline High School.

"The A's don't seem to be afraid to go deep into the community; you never saw that before from them," said Iglesias, whose organization's real estate portfolio includes the Fruitvale Village development. "Now they're in East Oakland, in the Fruitvale, and they've brought in a team that includes [A's vice president of external affairs] Taj Tashombe, people who know Oakland."

The A's also have been receptive to the community's needs, Iglesias said, noting that East Oakland residents have been meeting with the team to share what they want added to the Coliseum site, if the A's are to develop the 120-acre complex.

That inclusive approach is necessary to regaining the community's trust, especially because the city's housing issues are more challenging than ever.

"The biggest community issue right now is really about displacement and the pressures of gentrification," Iglesias said. "It's been exciting to have these conversations with the A's about how to make this project work for the community. They understand what kind of impact this ballpark will have on Oakland."

The A's plan to continue meeting with groups in all corners of the city and hammering out "a robust community benefits agreement" will be a big part of that process, Kaval said.

"Any ballpark plan we have has to deal with its impact on vulnerable communities," he said. "That's why we plan to have affordable housing and a local hire plan, to make sure whatever's being done is done in a responsible way, because it's an important part of us being a good community citizen."

One of Kaval's other challenges is rebuilding the team's once-strong fan base. That has led some critics to worry that a new ballpark would gentrify the A's' game experience.

The franchise has begun taking steps to make sure that doesn't happen, Kaval said.

He pointed to several of the team's ticket programs, including a new one called A's Access, which offers discounts on parking, concessions, merchandise, and admission to the Coliseum's Treehouse section.

"It's very important for us to be inclusive as an organization, getting people into the park in an affordable way," Kaval said. "It's all to combat the crisis in pro sports of pricing out regular fans."

"I reject the hypothesis that it'll crowd out the average fan," Kaval said. "We're going to preserve the experience of longtime fans but also extend a hand to new ones to grow our fan base. Both things are possible. When we had 58,000 fans this year at the Coliseum, we had the place rocking. Our new ballpark can be an amazing location like that — a place for people to gather across socioeconomic lines — because that's the beauty of our national pastime."

Iglesias worked at San Francisco's Redevelopment Agency in the late 1990s when the Giants were building their new ballpark that transformed the franchise and the formerly moribund Mission Bay neighborhood.

"I want that in Oakland," Iglesias said. "Given the gentrification issues, it's a challenge. But it's an opportunity for Oakland, too, if you develop the ballpark with the idea that it will also enhance the community. To see that the A's are ready to be a part of that is exciting."

Iglesias paused before laughing softly: "And a little bit scary at the same time."

Chris De Benedetti, a co-founding member of Baseball Oakland, writes about Oakland sports for the Express.