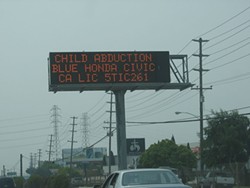 Governor Jerry Brown has signed legislation to enact a hit-and-run "Yellow Alert" system that will enable police to broadcast information on freeway signs about vehicles suspected of fleeing serious or fatal crashes. This new alert system — proposed in Assembly Bill 8, authored by Assemblymember Mike Gatto (D-Glendale) — could be particularly useful for Oakland, which has consistently had the highest rate of hit-and-crashes of any large city in the state. As we reported earlier this year, the Oakland Police Department solves only a small fraction of hit-and-run cases: In 2013, out of 346 hit-and-runs in which victims were injured or killed, only 14 cases — 4 percent — led to criminal charges. And in 2014, police solved only 3 percent of serious hit-and-run cases. And there is an alarming number of hit-and-runs here; roughly one out of every six motorists who injure or kill a victim flees the crime scene.

The Yellow Alert system will function in a similar manner as the emergency "Amber Alerts" that law enforcement currently send out to spread the word about child abductions. The state will only use Yellow Alerts when local law enforcement agencies have sufficient descriptions of a vehicle or the identity of a suspect — and only for collisions that are fatal or result in "serious bodily injury." Brown vetoed similar legislation last year, citing concerns about the emergency system being overloaded with alerts.

The California Highway Patrol had again expressed concerns earlier this year about AB 8, arguing that Amber Alerts are successful because they are so rare and raising concerns that an increase in alerts could make the emergency system less effective. But Gatto's office has emphasized that the hit-and-run alerts would be geographically limited and further has noted that the state's freeway signs are not currently overburdened, considering that they sometimes display public service announcements, such as "buckle up" or "conserve water."

And supporters of the bill have argued that there is a great need for these kinds of alerts, considering that many cities are suffering from local hit-and-run epidemics. Gatto's office — which has cited Oakland's high rate of hit-and-runs and low rate of arrests — has noted that officials in the City of Los Angeles are now offering $50,000 rewards for information on hit-and-run cases. The Los Angeles Police Department also failed to solve 80 percent of hit-and-run crimes from 2008 to 2012, according to Gatto.

Additionally, similar Yellow Alert systems have been very successful outside of California. In Denver, Colorado, a hit-and-run alert system implemented in 2012 led to a 76 percent arrest rate in cases in which the authorities activated the alert. Colorado lawmakers subsequently expanded the program statewide.

In a statement yesterday, Gatto said the new system could also have a deterrent effect. “This bill is just as much about preventing hit-and-runs as it is about solving them. If people know that their information will be broadcast on these signs and there’s a chance they’ll be caught, the likelihood of them fleeing will decrease.”

Bike and pedestrian advocates have also supported the bill. Dave Snyder of the California Bicycle Coalition said in a statement yesterday, “Many victims of hit-and-run crashes are walking and biking, especially in low-income communities. ... We know from Colorado’s experience that a yellow alert works to help law enforcement find hit-and-run perpetrators, and find justice for victims."