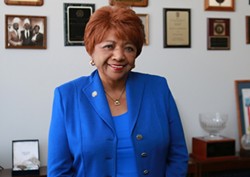 Today, the California NAACP filed a ballot initiative with the Secretary of State to legalize cannabis for adult use in the state's 2016 general election. The California Hawaii NAACP's initiative entitled "Community Act to Regulate, Control and Tax Cannabis of 2016" is signed by director Alice Huffman.

We're getting reports that the NAACP isn't actually going to run its own initiative, but has submitted model language as a show of support for the 2016 effort. Huffman and the NAACP are working with the main group, dubbed, ReformCA.

The NAACP initiative represents another watershed moment in the history of minority support for pot policy reform. It notes that:

According to The National Research Council's recent study of the 11 U.S. states where cannabis was decriminalized, there is little apparent relationship between severity of sanctions and the rate of consumption.

Cannabis has fewer harmful effects than either alcohol or cigarettes, which are both legal for adult consumption. Cannabis is not physically addictive, does not have long term toxic effects on the body, and does not cause its consumers to become violent.

There is an estimated $15 billion in illegal cannabis transactions in California each year. Taxing and regulating cannabis, like alcohol and cigarettes, will generate billions of dollars in annual revenues for California to fund what matters most to Californians: jobs, health care,
schools and libraries, roads, and the rebuilding of the urban core.

The illegality of cannabis enables the continuation of an out-of-control criminal market, which in turn spawns other illegal and often violent activities by drug lords profiting from illegal sales and addiction to support domestic and foreign criminal enterprises .. Establishing legal, regulated sales outlets would put dangerous street dealers and drug lords out of business which would once again make urban communities a safer place to reside.

The war on drugs has not targeted the major foreign producers and importers but rather has disproportionately targeted poor and minority recreational cannabis users in urban communities, resulting in criminal records imprisonment, and financial penalties not imposed
upon cannabis users in majority communities, and resulting in a cycle of unemployment, poverty, family breakup and other disparate impacts on minority citizens including criminal records.


Adults 21 and over could possess up to one ounce under the NAACP guidelines, and grow up to 25 square-feet of cannabis for personal use, and keep the harvest. Read the NAACP's full proposed law, here.