May 10, 2016
comment
Every year, California lawmakers work to imprison automobile drivers who are sober, based on an arbitrary and unscientific amount of marijuana byproducts in their body.

But this year, Assembly Bill 2740 is about to have a huge, head-on collision with science.

As it sat in the Suspense File this morning, the widely respected automotive group AAA released a bombshell of study adding to the proof such a law would be unscientific, unjust, wasteful, and dangerous, because it takes cops and prosecutors’ focus off real road dangers.

“There is no evidence from the data collected ... that any objective threshold exists that established impairment, based on THC concentrations measured in specimens collected from cannabis-positive subjects placed under arrest for impaired driving,” the AAA report “An Evaluation of Data from Drivers Arrested for Driving Under the Influence in Relation to Per se Limits for Cannabis” finds.

A regular medical cannabis patient or wellness user might easily test over AB 2740’s unscientific threshold of five nanograms of THC, per milliliter of blood, so California NORML is telling medical marijuana patients, as well as responsible drivers to contact their representative today to kill AB 2740 and prevent the criminalization of sober drivers. 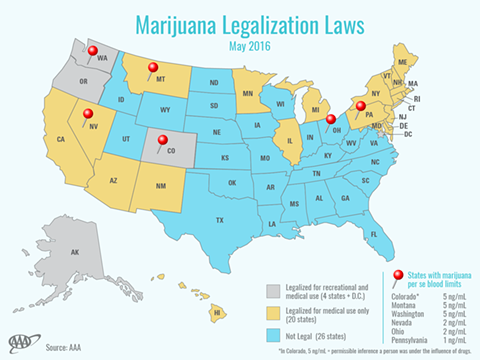 This issue is coming up every year in California, because the alleged scourge of stoned drivers is trendy in law enforcement circles.

Law enforcement has been saying for decades that reforming cannabis laws makes roads more dangerous. The opposite is likely true.

In the cannabis capital of California, auto fatalities were down 1.1 percent from 3,107 in 2013 to 3,074 in 2014, and are at some of the lowest levels since World War II, despite tens of millions more cars being on the road.

But with cannabis legalization increasing, so is cops’ budgets for testing dead drivers’ blood for drugs. And the more you look for anything, the more you find. Just ask Washington.

QUADRUPLE THE BLOOD TESTS
The state of Washington went from testing one in four dead drivers for drugs, to every dead driver after legalization — and low and behold, they found more dead drivers with cannabis byproducts in their system.

But even that means little, AAA reports. For one, the amount of THC or its metabolite (known as THC-COOH) does not correlate with that driver’s level of impairment, AAA reports. This has been a scientific fact since the ‘60s, when the U.S. government approved pure THC pills called Marinol and warned patients to avoid driving until they could “tolerate the drug”.

Still, the trumped up ‘stoned driving’ menace will not die. In the media reporting on the AAA findings, many led with the headline that: “AAA: fatal crashes from those who recently used marijuana doubled”.

That’s not true. What doubled was the amount of dead drivers who were tested and then found to have THC-COOH in their system, THC-COOH that could be there days or weeks after the person used marijuana, and long after its effects have worn off.

“… it is possible that some of the THC-positive drivers in the current study may have last used marijuana several hours or even days prior to the crash,” AAA reports. “… the results of this study do not indicate that drivers with detectable THC in their blood at the time of the crash were necessarily impaired by THC or that they were at-fault for the crash.”

POLICE ARE COOKING THE NUMBERS
Researchers looked at records of 3,031 drivers involved in 2,070 fatal crashes that occurred in the state of Washington between January 1, 2010 and December 31, 2014, and found most dead drivers’ blood wasn’t tested before legalization.

Half of the drivers in AAA’s studies “had missing values for THC”, so researchers fudged the numbers to try and make apples-to-apples comparisons of pre- and post-legalization years. They called it “imputation” and admit that “bias could still be present in the imputed values.”

After legalization, the cops started testing every dead driver’s blood: “the proportion of tested drivers whose tests were performed on blood specimens increased substantially over the study period. At the beginning of the study period, approximately one in four drivers tested for drugs was not subject to a blood test, whereas in 2013 and 2014, almost all drivers tested for drugs were subject to a blood test.”

AAA admits they cooked the books to make up for a lack of data in the years before legalization increased drug testing.

And where cannabis molecules are found, they are rarely the sole factor. Only 23 percent of these DUI drivers were positive only for cannabinoids. “Alcohol was present in 59 percent, and other drugs in 33 percent, of these cannabinoid-positive subjects.”

Cannabis advocates say Americans must stand up and reject the criminal justice industrial complex, which now seeks to imprison people who have committed no crime other than to drive sober. These 5 ng / ml THC per se limits are all the rage in law enforcement policy circles, and they’re a deadly waste of time and resources.

“… a quantitative threshold for per se laws for THC following cannabis use cannot be scientifically supported,” AAA states.

The National Highway Transportation Safety Administration has repeatedly stated the biggest dangers on the road are drunk drivers, tired drivers, and distracted drivers, including those who text.

Diverting law enforcement money and time from the real vectors of road death to the boogeyman of stoned driving could likely cost hundreds of Americans their lives, through under-enforcement of drunk driving laws, anti-texting laws, and workplace rules around tired drivers — one of whom nearly killed comedian Tracy Morgan.

California road deaths remain at near their lowest point in recorded history, due in large part to safety improvements and law enforcement’s heroic work taking drunks off the road. But more should be done. Currently, California’s criminal justice system punishes drunk drivers, but doesn’t address their powerful addiction to alcohol; so it’s just a matter of time before they get back on the road again with their addiction intact.

That might be where lawmakers should be focusing their efforts, not scapegoating sober drivers with THC and THC-COOH in their system.

“There is understandably a strong desire by both lawmakers and the public to create legal limits for marijuana impairment, in the same manner as we do with alcohol,” stated Marshall Doney, AAA’s President and CEO. “In the case of marijuana, this approach is flawed and not supported by scientific research. It’s simply not possible today to determine whether a driver is impaired based solely on the amount of the drug in their body.”