Oakland has failed to report hundreds of thousands of gallons of toxic sewage spills that have sickened animals, damaged property, and polluted waterways, including Lake Temescal. 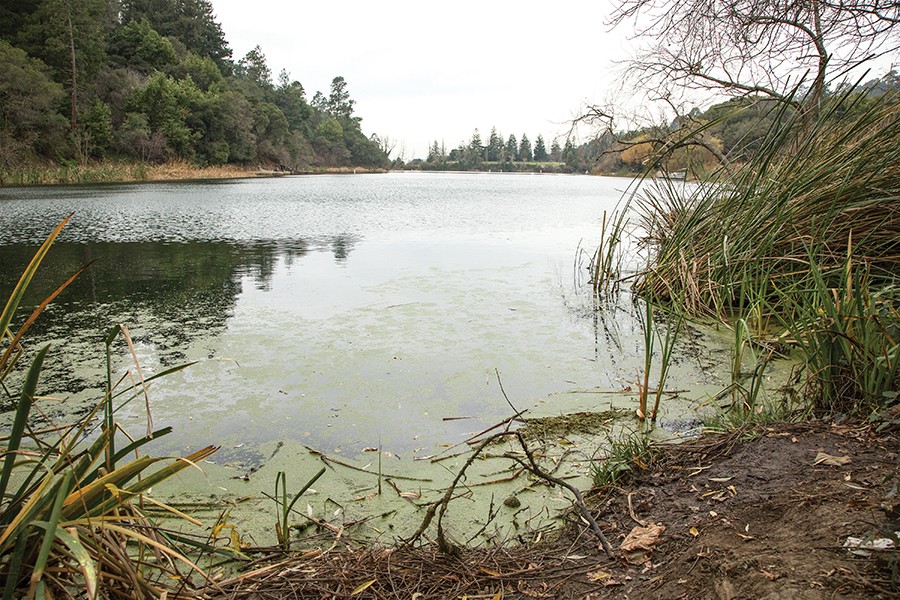 On a cold, cloudy winter weekday in early January, Lake Temescal was abuzz with activity. Joggers passed by dog-walkers and stroller-pushers along a path that circles the small reservoir in North Oakland, while toddlers played in the small sand dunes on the man-made beach and waterfowl perched on floating buoys in the water. Anglers stood onshore hoping to catch rainbow trout, stocked there in the winter season.

Surrounded by redwoods and aquatic greenery, the lake has offered Oakland residents the chance to escape the hustle and bustle of the city since it opened to the public in 1936. Not even the hum of cars speeding by on Highway 24, which hovers overhead near the park, is enough to distract from the tranquil beauty of this urban oasis.

But in recent years, water quality issues have repeatedly forced the lake to close, making it inaccessible to the hundreds of thousands of families from throughout Oakland who visit the park annually. In late December, the East Bay Regional Park District, which operates the Temescal Regional Recreation Area that includes the lake, posted signs along a walkway near the lake instructing visitors not to enter the water or fish.

"I have been coming to this lake for several years," said local resident Jean Cassidy. She added that she used to bring her kids when they were young but now sees the water quality warnings much more often. "I don't remember the problem ever being as bad as it is now. They have summer programs for the kids here, and they can't even swim in the water. It's sad."

Although the signs indicate an issue with the water, there is no clarification about what's wrong with it and nothing specifically mentioning the ongoing sewage spills from broken city sewer lines nearby.

East Bay Regional Park officials say sewage spills regularly into the Lake Temescal watershed — but they aren't able document how much or how often. That's the city of Oakland's responsibility.

"It happens every year," said Hal MacLean, park district water management supervisor. He explained that they post closure signs for fishing and swimming every time there is a sewage spill and don't reopen until certain bacteria levels drop.

"A lot of times, somebody will find it, and you don't know how long it has been happening," he said of sewage spills, adding that they don't know the extent of the bacteria that people could be exposed to. "We are using indicator bacteria, which won't necessarily get you sick — but there could be other things in the water."

Park officials regularly check bacteria levels during the summer swim season but not during the winter months when people aren't expected to enter the water. Still, the lake is a popular fishing spot year-round. MacLean said after a known spill occurs, they monitor the water quality more closely.

"We sample after they stop the spill to see what damage is done," he explained. "We don't really clean up the lake — there is constantly water going into the lake and water going out of the lake. So, you have a lot of flushing and mixing, and when your bacteria numbers are within a range, then you've got the confidence that it has dissipated. If there's body contact and swimming, then the numbers are more stringent than if there's just fishing."

Most of the closures in recent years, however, were not blamed on sewage spills but on toxic algae blooms, which could be dangerous if ingested, especially for dogs. But it turns out there could be a connection: Algae thrives on sewage.

"Toxic algae is blue green algae or phytobacteria," MacLean explained. "It doesn't necessarily always have toxins. But one of the issues we have is there are a lot of nutrients in the lake. And there are some people who have been saying that ammonia can contribute to whether you have toxic algae blooms or not, too. These sewer spills will transport a lot of nutrients and ammonia into the lake."

Alexander Horne, an ecological engineer and professor emeritus at UC Berkeley who has spent years studying algae, agreed that sewage from the city's broken sewer lines could be behind a bigger bloom. He explained that the protein from sewage that breaks down into ammonia, nitrates, and phosphates provides algae with a hearty feast. "The algae love it," he said. "If you wanted to grow algae, you could grow it very nicely in sewage."

Horne said he doesn't believe the public health risk is high, but untreated sewage in any lake is a problem.

For Oakland, it's a problem that's been shielded from public knowledge. There have been numerous overflows into Lake Temescal, but records show the city has sometimes not properly reported the spills.


Emails obtained by the Express reveal that the park district alerted the Oakland Public Works Department of a spill early last year that the city didn't stop for weeks. On Feb. 8, MacLean sent an email to others in the department about the amount of sewage flooding into Lake Temescal.

"The city of Oakland is attempting to pump liquid sewage from the storm drain to a sewer line in the southern parking lot at Lake Temescal," he wrote. "The city has reported SSOs [sanitary sewer overflow] twice since the SSO was initially thought to have stopped last week with removal of roots that caused a blockage in the sewer line. Unfortunately, they haven't had success draining the overabundance of sewage. Hopefully, the system will catch up with the overload soon. I'll keep you posted."