It isn’t exactly normal for a 77-year-old man to spend three months crisscrossing the country by himself in a leased Volkswagen Passat — zipping down freeways at an average speed of 85 miles an hour just so he can check out some agave distillery in Colorado he heard was experimenting with making apple brandy using crowdsourced, “found” apples. Then again, Bill Owens — the eternally curious founder and president of the American Distilling Institute and a legend in the East Bay craft brewing community — isn’t your typical 77-year-old.

“They only caught me three times exceeding the speed limit,” he said. “My attitude is catch me if you can.” 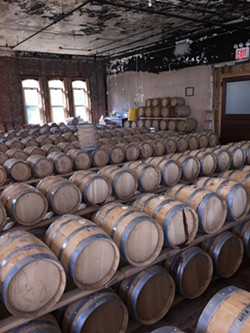 The point, Owens said, is he isn’t sure how many years he has left in the tank — “and I’ve got stuff to do.” To wit: As president of a craft distillers’ trade organization, Owens plots one of these tours every three or four years. He just got back from this year’s edition, during which he covered 17,000 miles and visited 130 craft distilleries in a three-month span. His goal is mostly just to see what new and noteworthy innovations are happening in the industry he advocates for, and this year, he was struck by the fact that nearly every microdistillery he visited was trying to get bigger — adding a second still or acquiring a few extra fermentation tanks.

It’s interesting, then, that Owens’ own big idea for the future is to go in the opposite direction: He wants to open a new Hayward nanobrewery — that is, a brewery that produces an even smaller volume of beer than a microbrewery — that draws its inspiration from the pop-up restaurants that are so ubiquitous in today’s dining scene.

Owens, who has a whole other career as an accomplished photojournalist, first made waves in the craft beverage world in the early Eighties, when he founded Buffalo Bill’s Brewery in Hayward shortly after California started allowing breweries to sell beer on their premises — a piece of legislation he helped advocate for — making it one of the first brewpubs in the country. One of his claims to fame? He’s widely cited as the brewer of the first commercially produced pumpkin ale in the United States. After he sold Buffalo Bill’s, Owens got so interested in distilling whiskey that he wound up founding the American Distilling Institute in 2003. That’s when he first started taking his periodic road trips.

In short, Owens has been at this for a while. But his latest idea is something that seems completely new. For his pop-up nanobrewery — which might include a “nanodistillery” component — Owens imagines that he would brew just thirty or forty gallons of beer at a time — a quantity small enough that he could sell it all in a day or two. The small volume would limit the brewery’s overhead costs, and, just as important, it would mean he could produce different beers all the time, with a very short turnaround: Start brewing the beer on a Monday, and by the following Friday, he’d be ready to start selling it.

All of this is still just an “idea in formulation,” Owens said — but it’s an idea he believes is going to have its day very soon. And similar to dining pop-ups, he imagines his brewpub pop-ups would be able to set up at all different kinds of venues — restaurants, fairgrounds, art festivals, and more. He’s currently in talks with restaurateur Geoffrey Deetz, who’s plotting his own Vietnamese eatery, about the possibility of some food-oriented collaboration.

Of course, Owens’ talk of opening the tiniest, most nomadic little brewery anyone has ever seen comes at the same time the power players in alcohol industry — the Anheuser-Busches and SABMillers of the world — are only getting bigger. But Owens said he doesn’t care about all that corporate mediocrity. What he wants is to meet people who are growing their own wormwood to make absinthe — people growing their own lemongrass to put in a beer or a whiskey.

As for his own venture, his hopes are high. “I could brew a spice beer today and be selling it by Christmas Day,” he said.