The famous New York artist is barely present in the new documentary. 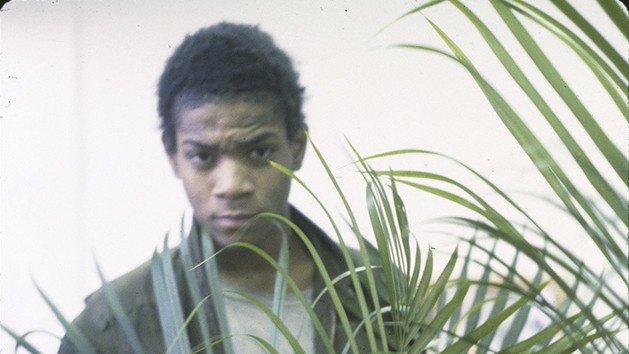 The "celebrity parasite biopic" has become a staple in the world of independent film in recent years. Movies like Miles Ahead (Miles Davis), Papa Hemingway in Cuba (Ernest Hemingway) and Film Stars Don't Die in Liverpool (Gloria Grahame) forgo expensive licensing rights by telling the stories of celebrities through the eyes of their ex-lovers, friends, employees, hangers-on, and assorted bottom-feeding sycophants, rather than through the eyes of the only character we care about.

Sara Driver's Boom for Real: The Late Teenage Years of Jean-Michel Basquiat is the documentary version of the celebrity parasite biopic, a film that uses the legendary artist as bait for a story in which he plays a minor part. Imagine if Asif Kapadia's intensely personal documentary Amy was 20 percent about Amy Winehouse and 80 percent about the neo-soul movement of the mid-2000s, and you get the general idea about the dubious necessity of Boom for Real.

An early collaborator with 1970s and '80s New York scenester Jim Jarmusch, Driver certainly ran in some of the same circles as Basquiat, but it's obvious that she had limited access to his voice, image, and art. We never hear him speak in the film, and Driver rehashes the same few grainy images of the teenage Basquiat over and over. No matter how good the intentions, Boom for Real too often plays like white people contextualizing and defining Basquiat within the lines of their own white scene.

Instead of a Basquiat doc, this is largely a film about the evolution of the New York City art scene, showing the decaying conditions that allowed Basquiat to flourish. Driver opens with an audio clip of President Gerald Ford talking about the city's problems in the 1970s and expressing his staunch opposition to a bailout. The pre-Disney New York of that time was a lawless, blight-filled city, especially on the Lower East Side where a young and restless Basquiat began creating cryptic and poetic graffiti art under the name SAMO.

Boom for Real opens in 1976 when Basquiat was a quiet and awkward teenage street kid sleeping on floors, chasing after girls, and flitting around the margins of the underground art scene. In a rebuke of the minimalist art of the previous generation that was still filling stuffy SoHo galleries, young artists of the era took to their work to the streets, with the top artists like Basquiat eventually finding mainstream success in the early 1980s.

Driver tries to place Basquiat within a larger scene of poor, young, and hungry artists, musicians, and filmmakers struggling to find their voices and sell their art. New York City narcissism and nostalgia aside, though, none of that struggling young artist stuff is unique to any time or place, and it's not interesting except for the fact that some of those struggling young artists partied with Jean-Michel Basquiat.

The few fleeting glimpses that we get into the world of young Basquiat — his relentless, childlike "fiddling" on walls, doors, and floors; his rapid evolution as an artist; his diverse influences that ranged from cartoons to textbooks; his facial expression permanently frozen between haunted and awed — are extremely tantalizing, but there is always the impression that we're only getting a sliver of the story, and a sliver processed through an insufficient and agenda-driven filter at that.

Of course, a lot of the elements in Boom for Real that don't directly involve Basquiat still tie back into his story in some way, such as the Warhol hero-worship of the era's young artists or the introduction of heroin into the scene. (Basquiat overdosed at the age of 27.) In fact, the parts of Boom for Real that most tangentially relate to Basquiat, such as the crossover between graffiti art, punk, and hip-hop, are the most developed and coherent sections, but that's not the bill of goods that this movie tries to sell.

Boom for Real: The Late Teenage Years of Jean-Michel Basquiat