March 11, 2016
1 comment
Pedro Figueroa’s story is well-known in Latino communities throughout the Bay Area. In December 2014, the undocumented immigrant from El Salvador went into a San Francisco police station to report that his car was stolen car. Police found a warrant for Figueroa’s arrest, but uncovered no further details. When Figueroa walked out the door, agents from the US Immigration Customs and Enforcement (ICE) were waiting for him. 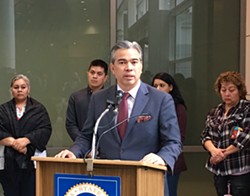 A bill introduced on Friday and authored by Assemblymember Rob Bonta, D-Alameda, intends to make sure that secret agreements and communications between local police and ICE undergo public vetting and approval by elected officials in the state.

Bonta unveiled details of Assembly Bill 2792, also to be known as the Transparent Review of Unjust Transfers and Holds (TRUTH Act), at a press conference at the state building in downtown Oakland, along with labor and civil rights groups and with immigrants who have dealt with ICE in the past.

“California’s immigrants [are] an integral part of our state’s social fabric, but when Immigration and Custom Enforcement coerces local law enforcement into carrying out deportations, families are separated and community trust is destroyed,” said Bonta. Undocumented immigrants are afraid to report crimes for fear of being obtained, he added.

A previous bill dubbed the TRUST Act and signed into law by Governor Jerry Brow in 2013 gave undocumented immigrants some relief by requiring that holds placed by ICE can only be for those convicted of violent crimes. But ICE found a loophole that Bonta said will be closed by his legislation.

“When the TRUST Act went into effect, ICE undermined the law by requesting local law enforcement notify them of personal information, such as their release time, so they could be waiting with a white van to pick up our immigrant community members.”
The bill hopes to create transparency for local detention and deportation policies and require any agreements with ICE to be vetted by the public and approved by elected officials.

Law enforcement groups across the state are expected to oppose the bill as it winds through the legislature. “We expect it,” said Bonta. Pushback from law enforcement against the TRUST Act in 2013 was also strong, he added, before it was eventually signed into law.

In Alameda County, the sheriff’s department’s coordination with ICE has been controversial in recent years. In 2013, the Alameda County Board of Supervisors approved a resolution asking Sheriff Gregory Ahern to not participate in the federal immigration program known as Secure Communities, which came under criticism for creating mistrust in Latino communities toward law enforcement and often splitting up families due to deportations.

But Ahern ignored the request. In recent months, Ahern has also said that he will continue to work with ICE in light of the controversy involving the San Francisco County Sheriff’s Department and the alleged killing of Kathryn Steinle of Pleasanton by an undocumented immigrant who has a history of drug offenses. San Francisco did not provide ICE with information regarding the alleged suspect and the incident provoked a national debate on immigration that has continued during the current presidential race.

Bonta and other speakers on Friday morning agree that offenders of violent crime deserve punishment, but the current system divides immigrant communities, they said, and, as Bonta said, “revictimizes victims.” Figueroa, through a translator, called his arrest last year unjust. “I was asking for help, and instead I was turned over to immigration.”

With a nod toward answering vitriolic statements toward immigrants by Republican presidential candidate Donald Trump, Bonta said, “Some of these people have made mistakes. Those mistakes should not jeopardize their future in the country they have come to call home. This is California, the most diverse state in the nation and the most progressive in the nation. In California, we don’t build walls, we tear them down… . We are not going to be dragged down by the recent national rhetoric that is unrealistic, unfounded and, frankly, un-American.”