Brentwood-based sculpture artist Julee Richardson began her multi-piece Pieta takeoff of a Black mother holding her dead son in 2017. The fragmented bust of a young Black man—head dropped to one shoulder, skin tones eerily pink, green and gray, eyes forever closed—remained wrapped in plastic until recently. Richardson changed its title multiple times, but work to complete the entire piece ceased three years ago after she suffered a severe loss in her family. 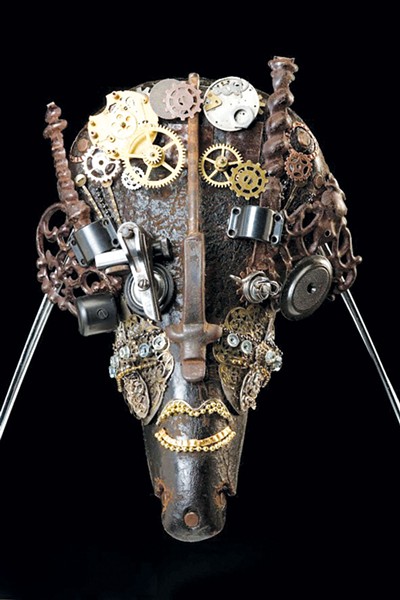 Perhaps because the figure represented so very many Black men, some hardly older than boys, and all of them killed by police or other "powers that be, wrongly," according to Richardson, the title shifted as if to embrace copious loss, from A Mother's Grief to I Too Am Your Brother to the most recent pivot in 2020: Homage to Black Lives Matter.

"What do you think?" Richardson asks in a Nov. 9 email, following a phone interview the day before. "For some reason I have resisted calling it Black Lives Matter." On the phone, she says African American males are an "endangered species."

Richardson, 76, grew up and attended college in New York state. Moving to the Bay Area as an adult, she earned an M.S. in Gerontology from Holy Names College in Oakland and a Ph.D. in Human Development & Aging from the University of California, San Francisco. She adopted and parented a son, Michael James Richardson, and taught throughout the Bay Area but primarily at Chabot College in Hayward, where she coordinated the adult education program and taught sociology.

With her sister, whose 2017 death caused an abrupt stop in her creativity for a time, Richardson purchased three homes. "We lived together for 40 years," Richardson says. "She was my best friend and best art critic." Upon retirement in 2014, she and her sister sold the Oakland Hills home they had owned for three decades and moved to Brentwood.

Richardson says the art she has created during the pandemic lockdown is joyful, playful. Ceramic hearts bubble with texture and, reminiscent of coral, are gently upbeat and delicately colored. A collection of Steampunk dolls bring delightful contrast; their funky gowns, industrial headdresses and "gear-jewel"-adorned faces are so contemporary she says a group of young people who saw them at the Delta Gallery in Brentwood last year was overheard saying they must have been made by a Millennial or a Gen Z artist. "I love that they didn't think a 75-year-old woman had done them," she says. "It said I wasn't staying and working in an outdated style. It said my artistic expression was still growing."

The steampunk dolls reveal Richardson's secret fetish for garage sales and flea markets. "When my sister was alive, she'd speed up every time we passed a garage sale," she says. "She'd hope I wouldn't see it and want to stop." Richardson's passion for "junk" became unrestrained after her sister succumbed to liver cancer three years ago. "I go to Urban Ore in Berkeley," she says. "I love that place. It's like going to the most outrageous boutique and everything is in my price range." Old watches, clocks, flutes, piccolos, movie projectors, miscellaneous rusted metal implements—all are rich fodder for the mechanical eyes and metal outfits she crafts and applies to dolls picked up at Goodwill or garage sales. "I let my imagination go into overdrive," she says. "They're light-hearted, pushing the envelope. Anything goes."

One glimpse at another series of ceramic pieces created in the years prior to the pandemic, The Unprotected, proves the "anything goes" attitude leads to remarkable diversity in Richardson's work. Included in the series is Hurt, a large, nearly life-size ceramic piece of a young girl. The sculpture's bleached tones are marred by sparingly applied blood-red markings, the girl's arms wrap around her legs, her mouth is harsh and severely downturned. A vertical seam splits through the center of her face like a permanent scar left by a viscous knife wound. Much like the homage to the Black Lives Matter bust, the impression is simultaneously vulnerable, beautiful and tragic.

Systemic racism, Richardson says, is nowhere more apparent than in the daily life experiences of young Black males. "The Pieta sculpture is someone's child, shot by the police—or someone who never made it from an attempted arrest to the moment of incarceration," she says. "He was killed before he ever got there. It's about that crime, that young African American males are part of an endangered species. We have to look at our conscious bias, not just unconscious, systemic bias.

"That kid [Dylan Roof] in South Carolina who slaughtered nine people, he made it to the jail. African American males who are stopped for questionable acts that may or may not have been illegal are shot by the police before making it anywhere. Or their necks are knelt upon. Or a guy who's supposedly stopping a fight and the police assume he's part of the problem—he's shot and killed."

While working on her Ph.D., Richardson experienced similar, if far less violent, powerlessness. "I was in my mid 30s and I wasn't a child, but I had never been in a situation where I was so powerless and it was so political," she says. "Professors had power; graduate students had none. We were used for their research to help foster their careers. The chair of my committee's name was going to go on my dissertation, above mine, and so I refused to have it published."

Richardson finds strength to overcome personal loss, ongoing social justice inequities, pain suffered profoundly by people of color and the isolation of the pandemic through art, including music. Three traditional African American hymns "brought me forward" she says, in the days and months after her sister died. "Jesus, Jesus, Jesus is a hymn in which those words are wailed over and over." In Millions, by the Winans, someone enters Heaven with one statement they want to say to God: "Millions didn't make it, but I was one of the ones who did." Acceptance, Richardson says, came with a final hymn; God Has Spoken, Let The Church Say Amen.

But acceptance will never mean surrender to the abuse of power or racism. "I see myself as a powerful Black woman," she says. "I get tremendous satisfaction out of being a Black artist creating a Black statement. It comes from everything in me that I love from my childhood." The steampunk dolls are a reflection of Black women's internal resiliency and strength, and she sees in the repurposed metal both solidity and flexibility in "taking on a new life or lifestyle."

Asked about creating art that epitomizes Covid, she chooses loneliness and isolation as themes. "I'm thinking of a piece I will create—it was about the people who died alone," she says. "That is the saddest part of this whole thing. Months after my sister's liver came in and she miraculously survived for a time, she told me she had been so lonely. She was in that place in-between and although I was able to be there, to hold her hand then, she was alone. I think of the people not able to grieve and have rituals to say goodbye to our loved ones."

Emerging from the pandemic lockdown, Richardson says galleries and art museums must showcase more work by Black artists; art that is a testimony to the diversity of people in America. She highlights the track records of Thelma Harris and the Joyce Gordon galleries in Oakland as evidence that galleries featuring African American artists are successful. "If they have quality art in their galleries, people love it and buy it," she says.

"Diversity doesn't mean America is a melting pot" is her favorite metaphor. "I heard the other day someone say that American was a melting pot," she says. "The reality is that a melting pot becomes mush. When you throw in all your ingredients and cook and cook, the potatoes lose their 'potato-ness.' America is a tossed salad: croutons, bacon, lettuce, tomatoes, onions—and they're tossed together and stay the way they are.

"Artists of color are not an expression of white Western art that has gone from cave paintings through abstraction and pop art to non-objective art. African American artists may still be in realism, not abstraction, because their experience isn't abstract. It isn't where they are. Their work should be looked on as having the same value."

Currently on exhibit at The Delta Gallery, there is also an online virtual show. Prices of pieces mentioned in the article: Homage to Black Lives Matter, $3,500; Steampunk Dolls, $350–$525 each. Contact: Juleerichardson@hotmail.com.