Bites on Broadway: Long Lines and a Last-Minute Change

John Birdsall Patience in the line for Go Streatery.

Oakland’s first-ever event devoted to street food brought as many as 600 to the Temescal Friday night. Bites on Broadway — the Friday night food pod scheduled for the summer — featured snaking food lines, lawn games, and an unexpected venue shift. Organizer Karen Hester had hoped to set up on the broad plaza in front of Oakland Technical High School, but lacking permission from the school district, Friday’s handful of vendors set up instead on 45th Street, along Tech’s northern perimeter.

“It really comes down to risk management,” Hester told What the Fork, citing OUSD’s concerns about legal liability. “I think it’s really unfortunate, especially when things like football games happen on campus, things where there’s real risk of injury.” 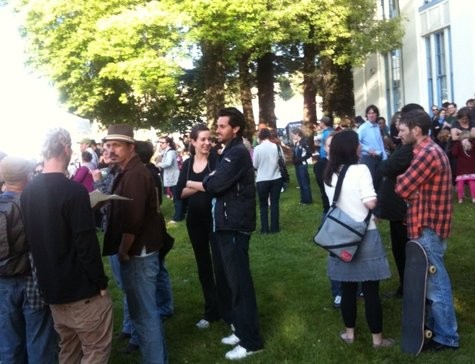 Not counting the mobile food scene at Oakland’s Art Murmur, Bites on Broadway is the second weekly street food pod to hit the East Bay. The much larger Off the Grid North Berkeley launched June 1.

Five East Bay vendors turned up at Bites on Broadway Friday, a mix of trucks and non-trucks: Tina Tamale, pizza maker Fist of Flour, Go Streatery, Sue’s Sassy Pies, and El Taco Bike. All were out of food by 8 p.m., according to Hester. At 6:30, about an hour after kickoff, WTF counted 170 mostly neighborhood residents spread out on Oakland Tech’s semi-muddy grass, playing lawn games organized by Oaklandish or waiting patiently in food lines. The one for Go Streatery was 45 deep, and Fist of Flour’s James Whitehead — who hand-tosses pizzas one at a time - reported a consistent 30-person queue. “It’s a lot of fucking people for three trucks,” grumbled a guy in sunglasses waiting for a chicken turnover from Sue’s.

“It was hard to know how many carts to have,” acknowledged Hester, whose Hesternet Productions also puts on the Temescal street fair and other outdoor festivals. She’s trying to line up one or two more for this Friday's Bites on Broadway, which won't feature Go Streatery but should feature Boffo Cart.

Still, Hester suggested, Friday's food was good enough to offset the waits. “People were waiting in line for 45 minutes to get a pizza from Fist of Flour because they know it’s worth it,” she said. “It’s a great problem to have right now."