Big Tobacco’s Hush-Hush '70s Plan To Get Into Weed

A parody image of a 'Marlboro Green' joint

As cannabis legalization spreads across America, tobacco companies are denying any interest in getting into weed.

But newly released historical documents show that tobacco companies did the same thing in the 1970s during the last historical high point for legalization, while simultaneously working in secret with the federal government on a legal weed cigarette. 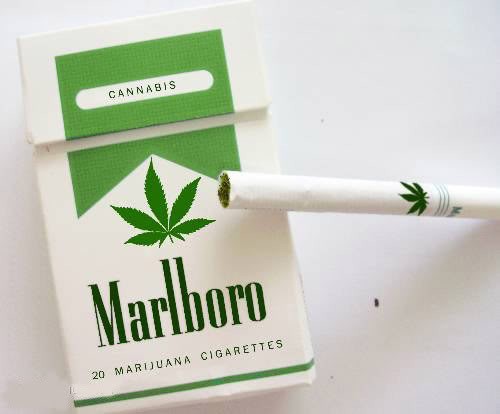 As I wrote in AlterNet last week, America has entered a short, liminal period in which Big Tobacco cannot enter the legal weed market, due to its federal illegality. This leaves the space to regional players like the Bay Area’s Medi-Cone, which has partnered with Ed Rosenthal on the $17 ‘Select’ pre-roll. Sort of like a Cohiba of chronic. Cavi-Cones are popular in Southern California. Colorado has a hot new regional pot cigarette retailing under the name Cranford’s.

“That’s what’s great about the way this is changing — slowly, over time,” Troy Dayton, CEO of cannabis venture capital firm The Arcview Group told me. “It’s giving the little guys a chance to really stake some claims prior to the big dogs getting in.”

The big dogs currently say they have no interest in getting in, but that’s what they said in the Seventies while colluding with the federal government on pot supplies, a new report from The Milibank Quarterly shows.

For example, the Department of Justice in the Seventies conspired with Philip Morris to research pot smoke, and agreed to keep the the research secret.

"In early 1970, an unsigned memorandum distributed to [Philip Morris]’s top management described PM’s rationale for working with the [Dept. of Justice] which was carefully written to make it seem as though the DOJ was asking PM to perform marijuana research when, in fact, the initial request came from PM’s Fagan to Joffe."

Philip Morris wrote in an internal memo: "We are in the business of relaxing people who are tense and providing a pick up for people who are bored or depressed. The human needs that our product fills will not go away. Thus, the only real threat to our business is that society will find other means of satisfying these needs."

"PM’s CEO, Joseph Cullman, issued a public statement that was printed in Time stating the industry was not interested in marijuana, claiming that PM “[has] held no discussions nor made any plans concerning the marketing of that product.”
…
The Milibank Quarterly concludes: "In the current favorable political climate for marijuana decriminalization, policymakers and public health authorities should develop and implement policies that would prevent the tobacco industry (or other comparable corporate interests with a penchant for marketing harmful products to children) from becoming directly involved in the burgeoning marijuana market, in a way that would replicate the smoking epidemic, which kills 480,000 Americans each year.”

That last line seems pretty disingenuous, since tobacco smoking causes cancer, and marijuana smoke does not.

But, the fact remains: the Drug War is effectively a pro-small business policy, locking out Big Tobacco.

If pot is legalized, should that policy continue? We'll take your perspectives in the comments.