But cannabis advocates warn that may not be enough for some Oakland cannabis businesses. 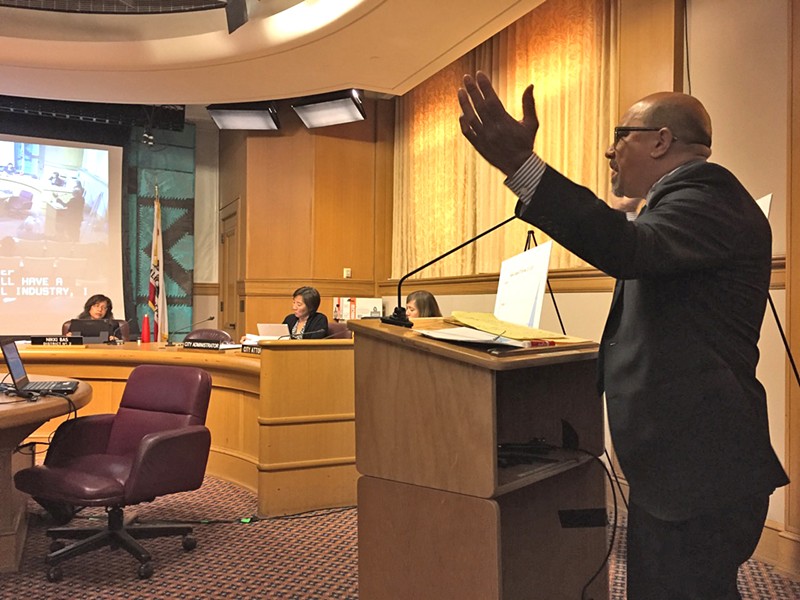 Oakland's tax on cannabis is threatening to decimate the industry in the city. That tax will likely be cut, but a lot of damage has already been done, and the industry's future depends largely on what the City Council decides to do next. Even cutting the tax in half — one of the proposals on the table — will not be enough, cannabis entrepreneurs and advocates say.

The council is scheduled to take the issue up this week, considering a proposal passed last week by the Finance Committee. Sadly, the East Bay Express prints on Tuesday, when the vote will be taken unless it is delayed, so as of this writing we don't know yet what will happen. We do, however, know that cannabis businesses and advocates in Oakland — widely considered to be the state's pot capital — have been warning for 18 months that the city's radically high tax rate (10 percent on gross sales) will send most cannabis companies out of town.

The industry's frustrations were apparent at last week's Finance Committee meeting. In a remarkable display, hundreds of people showed up, representing businesses huge and tiny. The room was so packed that the committee members and staff repeatedly stopped the proceedings to inform people standing in the aisles that they were violating the fire code, and ask them to repair to a room across the hall and watch the meeting on a TV monitor. Dozens of business owners and employees lined up to make one-minute pleas. A few of them were close to tears, or on the edge of full-on rage, because they feared they would lose their jobs or their businesses.

"We had to shut down for two months," Rasun Allah of the Green Guyz Collective delivery service told the committee, blaming the city's tax. "It's like I got this license to work for you guys, and to give you guys all the money."

Others said they had already decided to move their operations to cities like Emeryville, Richmond, and Santa Rosa, which impose much lower taxes. The big cannabis startup Flow Kana is close to making deals for two new distribution hubs. "We didn't even consider Oakland," company Vice President Michael Wheeler told the committee. "We went to West Sacramento instead." Flow Kana recently landed a financing round of $125 million, believed to be the largest ever for a U.S. cannabis company. Wheeler said the decision to locate its warehouses elsewhere cost Oakland 70 jobs.

Council and committee member Dan Kalb had proposed cutting the tax rate in half, to 5 percent. Critics said that for smaller businesses in particular, that rate would still pose an existential threat. Industry advocates asked instead for bracketed taxes, with very low rates on smaller companies, and substantially reduced rates for bigger ones.

The Finance Committee basically went along, at least on rates. Its proposal to the City Council is for companies with gross receipts of less than $500,000 to pay just 0.12 percent. Revenues between $500,000 and $1 million would be taxed at between 1.5 percent and 3 percent, depending on the type of business (retailers would pay the most, wholesalers and testing labs the least; manufacturers and cultivators would pay 2.5 percent). Revenues in excess of $1 million and less than $5 million would be taxed at rates ranging from 2 percent to 5 percent. And companies with revenues exceeding $5 million would pay rates between 3 percent and 5 percent.

Most critics of the current tax rates say that's a good start. In particular, "it would give equity companies a chance to survive," said James Anthony, a cannabis attorney and founding chair of the trade group Oakland Citizens for Equity & Prosperity. Oakland's equity program is meant to give minority communities, and people in them who had suffered legal consequences while pot was still prohibited, a leg up in the industry. The program requires that at least half of all cannabis licenses go to equity participants, who are sponsored by cannabis companies not in the program, often with free office or warehouse space. Most of the participants are small operations, often delivery services. Those companies, which work with small profit margins if they make profits at all, have been especially hard hit by the city's cannabis tax.

Many equity participants were doing business before pot was legalized in California. With legalization, "it transitioned from a hobby to a business," said Lanese Martin, a co-founder of the Hood Incubator, which represents equity participants. Now the city needs to give equity participants "a chance to bootstrap," she said, and a 10 percent tax rate does just the opposite. Martin noted than a large majority of Oakland's cannabis businesses collect less than $1 million in revenues each year. Martin agreed that the Finance Committee's recommended rates are an OK start, but that much more needs to be done.

Yet rates are not the only problem. Oakland's city staff recommended retaining the current rate because lowering taxes would put a "hole" in the city budget and force the city to forestall promised raises for city employees. For the same reason, it recommended that, if taxes must be cut, the new rates should take effect on Jan. 1, 2020. And to the chagrin of cannabis interests, the committee's proposal would do just that.

Anthony said that if the measure passes as-is, it will deal a huge blow to the industry. Citizens for Equity & Prosperity is asking the council to make the new rates retroactive to Jan. 1 2019. "Another 10 percent year will be a death blow" to many cannabis firms, he said.

As of early this week, it was impossible to tell how receptive the council might be to making the tax cuts retroactive. Kalb and the rest of the Finance Committee gave in on rates, but not on the timing of the cuts.

Citizens for Equity & Prosperity also is asking the council to lower the rate for companies with revenues of between $500,000 and $1 million. "Until you hit $1 million, he said, "you're still a small business."